Read the analysis of Shakespeare's language in the opening moments of the play. 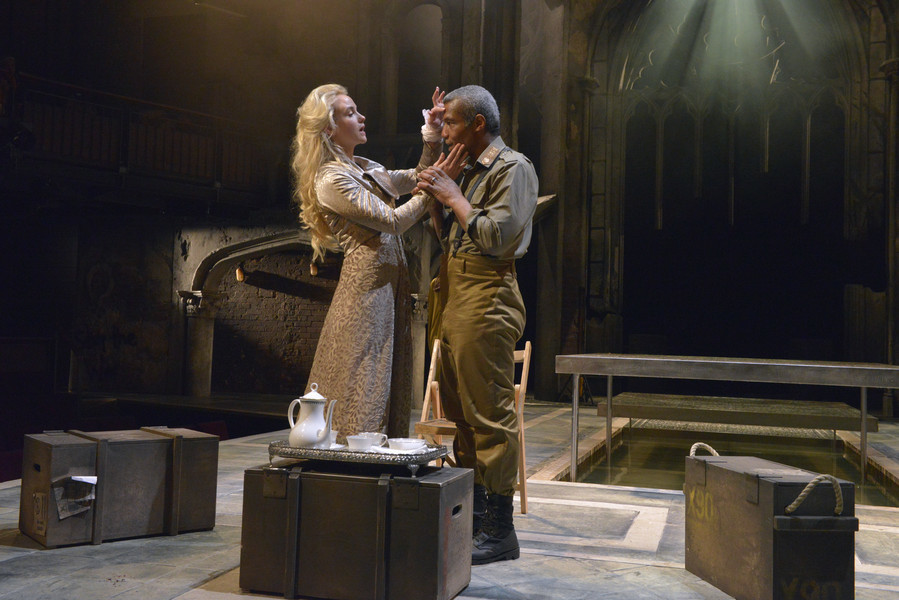 If the way in which Othello is spoken about before his first appearance on stage is important, then the same is true for Desdemona. Shakespeare chooses his characters’ words carefully to contrast a threatening Moor, with an innocent maid:

A maiden never bold,
Of spirit so still and quiet that her motion
Blushed at herself; and she, in spite of nature,
Of years, of country, of credit, everything,
To fall in love with what she feared to look on? (1.3.95-99)

It is inferred that this “maiden never bold” her Father describes does not know her own mind; she should be fearful of Othello, not attracted to him. Iago had also initially set up the contrast between Othello and Desdemona in black and white: “an old black ram” (1.1.87) and a “white ewe” (1.1.88).
However in much the same way that Shakespeare overturned assumptions about Othello when he began to speak for himself, Desdemona proves far from being fearful of anything, or anyone on her first appearance. She is her own person, with her own opinions, and does not share her father’s casual racism.
While Iago’s words wounded Othello’s reputation, Shakespeare ensures that Desdemona’s first speeches about her husband are filled with tenderness, loyalty, and compassion:

But here’s my husband:
And so much duty as my mother showed
To you, preferring you before her father,
So much I challenge that I may profess
Due to the Moor my lord. (1.3.184-189)

Iago’s speeches and imagery were shaped to suggest Othello’s difference, but Desdemona’s words seek to emphasise similarity: “And so much duty as my mother showed / To you.” Desdemona attempts to make Brabantio recognise that her love for Othello outweighs any act of disobedience on her part towards her father. She is pleading with him to recall what it was like to be young and in love. She is encouraging him to recall the love he had for her mother, and to see Othello as the suitor he had once been himself, rather than the figure Iago wants him to see.
When Desdemona refers to Othello as “the Moor” with her final words here, she is not emphasising his ethnicity but his identity as the man to whom she is most loyal – “my lord”, “my husband”. One might expect that the way in which the performer playing Desdemona would utter the words “the Moor” would sound quite different to the way the same words are spoken by Iago.
When invited to explain her sudden marriage, Desdemona states confidently:

That I did love the Moor to live with him
My downright violence and scorn of fortunes
May trumpet to the world. My heart’s subdued
Even to the very quality of my lord:
I saw Othello’s visage in his mind,
And to his honours and his valiant parts
Did I my soul and fortunes consecrate… (1.3.249-255)

Desdemona does not mention the colour of Othello’s skin: “I saw Othello’s visage in his mind”. In speaking of Othello’s “honours” and “valiant parts” Desdemona does much to foster the audience’s understanding of Othello as a valiant general and man of distinction. Throughout the play Desdemona defines Othello through his identities as a warrior, lover and story-teller, but never through his ethnicity. Shakespeare recognised the destructive power of a spoken slur (racial, religious, sexual, social) upon one’s reputation, and Othello serves as a powerful reminder of the way in which words can be used as weapons. It is Othello who will ultimately turn words to weapons when he labels Desdemona a “strumpet” (4.2.82) and “that cunning whore of Venice” (4.2.91) leading to her tragic death.While thinking about Shakespeare’s use of words, try listening to James Earl Jones delivery of Othello’s long speech about the wooing of Desdemona before the senate in Act 1 Scene 3As you listen you might like to consider:
© Royal Shakespeare Company

Hi there! We hope you're enjoying our article: Othello’s visage
This article is part of our course: Othello: In Performance