An analysis of Desdemona's character in Othello from a feminist perspective. 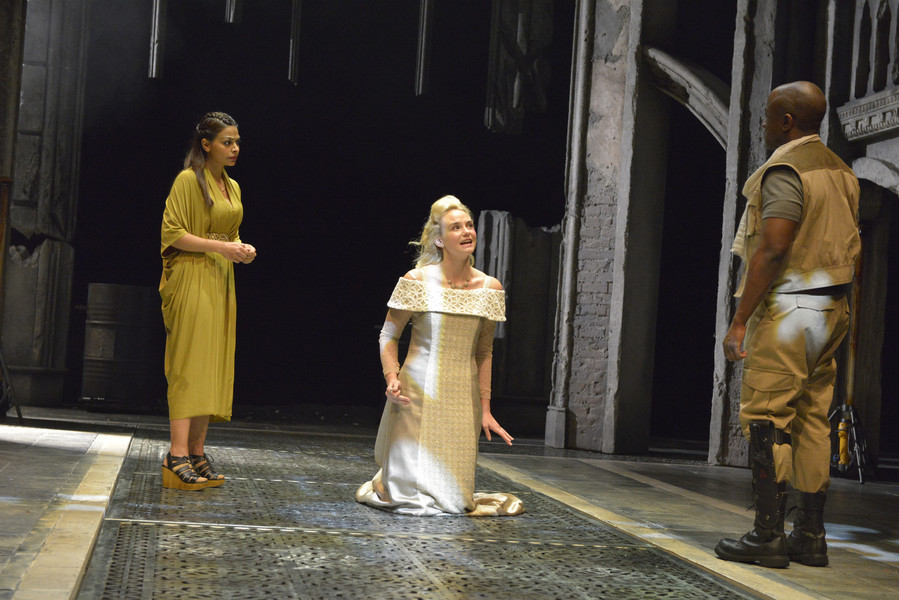 It’s not only critics, but also a number of feminist playwrights who have responded to Desdemona’s character. Feminist adaptations of Shakespeare’s plays came to prominence in the late 20th century and Shakespeare’s tragedies, in particular, have inspired a number of theatrical adaptations from the 1970s onwards. Some adaptations show women escaping from their Shakespearean fates, others aim to ‘shock us into change’ (Marianne Novy).

In Goodnight Desdemona (Good Morning Juliet) a young professor of English literature is working on a dissertation pursuing the theory that Othello and Romeo and Juliet were originally comedies. She soon finds herself sucked into the midst of the two plays, seeking the help of Desdemona and Juliet in order to find the ‘lost fool’ of the plays. Constance intervenes in the plot of Othello, revealing to Othello that Iago is trying to trick him; however, Iago finds another route of destruction – persuading Desdemona that Constance is a witch who is after Othello’s heart, and thereby reversing the jealousy plot of Shakespeare’s play, so that Desdemona is intent on killing Constance. Desdemona is presented as a strong, proactive character, and the play invites its audience to question gender and societal expectations.

It is important to note that this Desdemona is not like the one we’re used to. MacDonald establishes this from the outset, combining some of Shakespeare’s lines with her own. When Desdemona greets Othello, he addresses her as his “fair warrior,” which sets the tone. When she responds, her lines include a paraphrase of a line Shakespeare assigns to Othello which takes on a new meaning in this play. Referring to Othello, she says, “My sole regret – that heaven had not made me such a man; I but next in honour is to be his wife” (32). The implication in MacDonald’s re-rendering of these lines is not that Desdemona regrets not having a man like Othello, but that she regrets not being one herself. The play embroiders on this theme, portraying her as adventurous, aggressive, even bloodthirsty, while Othello becomes a pompous windbag, fond of telling old war stories.

A Play About a Handkerchief is set in the ‘back room of the palace on Cyprus’, where we see the play of Othello through the eyes of its female characters – Desdemona, Emilia and Bianca. Desdemona is not the character of Shakespeare’s play, but the incarnation of Iago’s fiction – she has slept with Othello’s entire encampment (excepting Cassio) and she enjoys telling Emilia of her sexual conquests. The play is published in Daniel Fischlin and Mark Fortier, Adaptations of Shakespeare: a Critical Anthology from the 17th Century to the Present. London: Routledge, 2000. The introduction can be read via Google books:

Toni Morrison’s Desdemona – a collaboration with director Peter Sellars and musician Rokia Traoré – centres around Desdemona’s relationship with her nurse, Barbary, who is only mentioned briefly in Shakespeare’s play. Both characters speak and sing from beyond the grave, as Desdemona seeks to understand what led to her death – reclaiming her narrative and giving her perspective on the events of Shakespeare’s play. An article about this play – ‘”Being Born a Girl”: Toni Morrison’s Desdemona’ by Jo Eldridge Carney is available here:

Perhaps the most moving and pertinent response to Desdemona’s silence is Christine Bruckner’s monologue ‘Desdemona – If only you had spoken’ (1992), contained in a book of that name.
Bruckner allows Desdemona a chance to speak – to explain and exonerate herself – just at the moment at which Othello is about to strangle her.
Here is an edited extract:

‘Peace and be still!’ you said.

No, Othello, no! I will not hold my peace. There are things I have to discuss with you, right here in our bedchamber. Do you want to turn our bed of love into a battleground? Does everything have to end in blood? Is that to be your last act of heroism? Killing the wife who loves you and who was faithful to you from the very first breath to the very last? A wife who is making no attempt to defend herself? You can still kill me in a quarter-of-an-hour’s time. I will have this quarter-of-an-hour. Once, I put my whole life in your hands, Othello; don’t be stingy – give me fifteen minutes as a present.

Is there after all so little understanding lodged in that great, beautiful head? In that great big beautiful body, such a tiny heart? You put your trust in a scrap of stuff that is used for blowing one’s nose, or mopping one’s brow, or even to wipe away tears.

Your father gave that little napkin to your mother. And you gave it to me as a bridal gift – you did not have very much that you could give. I was spoilt, Othello. But I took care of the napkin and brought it with me to Cyprus. Ought I to have looked after it more carefully? Could I have foreseen that someone would spirit it away from me? That I would be surrounded by thieves in your house? Ought I to have known that you would turn this love-token against me? I was gullible, Othello, I was only too trusting. It never crossed my mind that a little piece of stuff would suffice to prove me guilty of being unfaithful. Me! Desdemona!

And she goes on, later, to berate him about Cassio and Iago:

Are you some sort of Holy Fool? Iago has turned that good man Cassio (yes! he is good, and utterly devoted to you, and his sweetheart is a girl called Bianca – everybody here knows that – except you. Why didn’t you ask him, man to man?) – Iago has turned him into a drunkard. Iago is quicker than you, and he’s cleverer, if cunning can be called cleverness. He hates you, and he hates Cassio, who you have given promotion to. I didn’t know that he hated me too. He sees people’s weaknesses and he exploits them. Cassio’s weakness was wine; yours is jealousy.

Having looked at some of these readingsr: