Flood forecasting could help a community to prepare for heavy rainfall. Read this article to learn more about flood risk management. 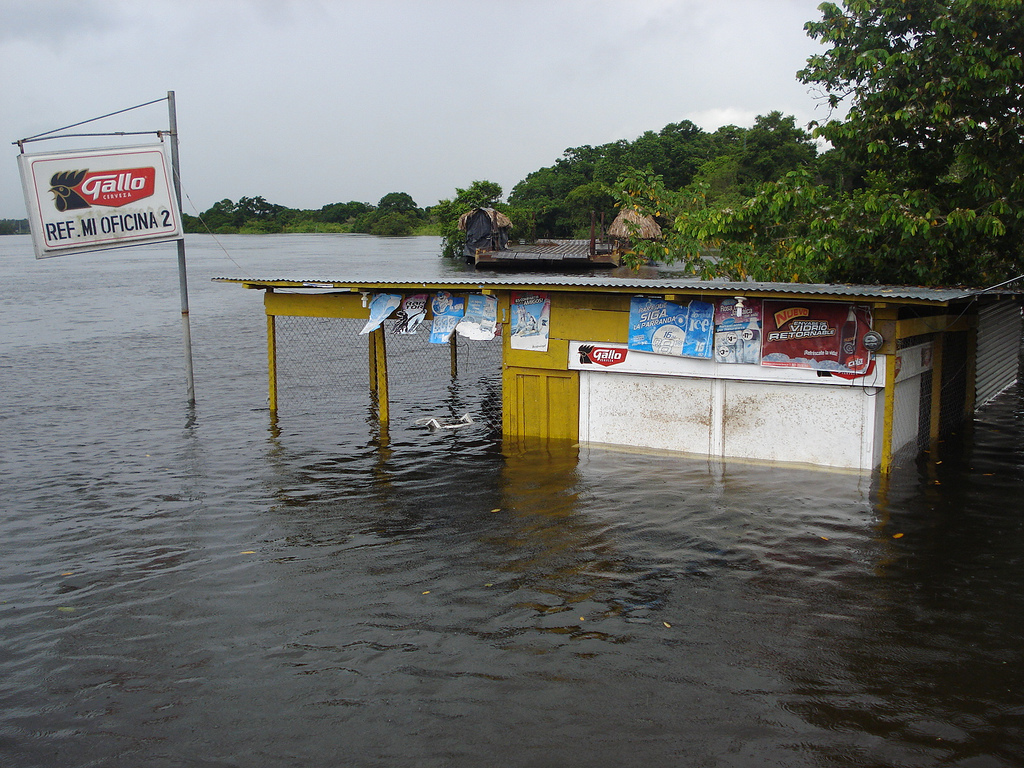 Major flood events cause severe disruption and distress to communities. Countries without significant investment in flood risk management are much more vulnerable when floods hit. Damage to buildings and infrastructure as well as to crops and livestock means it can take communities years to get back up on their feet after major events. Forecasts of an imminent flood could enable actions to be taken to help community preparedness and resilience, but are current flood forecasting capabilities good enough to make such decisions? Forecasting river floods requires a weather forecast model and a hydrological model to determine total rainfall, the amount that will run off into the river and the rate at which it does so. But how accurate are these models? And how accurately can we calculate rainfall using only a single weather forecast model? To improve our forecast we now run the model multiple times to give a probabilistic forecast. This is called an ensemble prediction system and is able to provide quantitative information on the uncertainty in the forecast, giving several possible future scenarios that can give an indication of the likelihood of a particular event occurring. Using an ensemble is particularly valuable for extreme events where a single model run might not simulate flood-generating rainfall. For example, in an ensemble of 50 members, if 10 out of the 50 members signify a flood, a warning with a 20% chance of flood could be issued. But what can we do with that information? How can we use this to better prepare for flood events? Actions to prepare could be triggered by threshold probabilities from this ensemble; for example from forecasts of a high probability of a low impact event, and/or a low probability of a high impact event. Acting in advance of a disaster is known to be favourable; prepositioning aid is more efficient than using helicopter drops during a flood event. Evacuations and distributing medical supplies prior to the flood can also help to save lives. In the UK and many other developed countries, thresholds for recommended actions, such as issuing warnings to the public, putting in place temporary flood defences or evacuations, are decided during ‘peace-time’ activities with forecasters and emergency responders. These activities involve conversations to incorporate expertise on hydrology and meteorology with knowledge about the vulnerability of communities living near rivers, thereby enabling a prediction of the likelihood and impact of flooding.

View Course
However, in developing countries, the lack of data on historic river flows or information about the river channel, such as its depth and width, makes it difficult to produce forecasts in the same way as in countries such as the UK. Meteorological predictions are also known to be of poorer quality over continents such as Africa where high-quality observations for data assimilation are not available. This poor quality means that there cannot be much confidence in the model’s ability to predict extremes. Additionally, it is also difficult to quantify vulnerability in developing countries due both to the lack of data and the fact that other contributing factors such as conflict and food security vary greatly over time. How can we use flood forecasting to predict river flow in developing countries taking into account the lack of data? The Global Flood Awareness System bypasses this lack of information by using a model climatology approach. Such an approach aims to predict the correct return period of a flow and not the actual flow within the river. The assumption it uses is that a flow that occurs only once in every twenty years within the model world can equate to an observed flow that only occurs once in every twenty years. Ultimately, to make use of these predictions requires linking with either inundation mapping or historical information on the impact of that return period flow. Forecasting systems that take this approach show considerable potential. However, there are two barriers, unrelated to the skill of the forecast, which need to be overcome to enable these forecasts to be used for humanitarian action: While meteorology and hydrology are scientific disciplines, the successful use of forecasts is not solely dependent on the skill of the forecast models. An increasingly more interdisciplinary skillset is required to promote the use of these forecasts within humanitarian organisations.
© University of Reading