In the video Dr Robert CM Stephens, an anaesthetic consultant at UCLH, discusses Cardio Pulmonary Exercise Testing, or CPET. Throughout the article he expands on some of the key points made in the video. Measuring someone’s VO2 peak is considered the gold standard for measuring fitness, and is used by elite sport teams to guide training in athletes. However, in hospital it can be used by perioperative physicians before surgery to help quantify surgical risk, and by respiratory physicians to investigate causes of breathlessness.But what is VO2, how do we measure it, why might it relate to fitness and how can we use it around the time of surgery?

When we are sitting quietly we breathe in 21% O2 and expire about 16%. This means that we’ve taken up 5% of that breath’s oxygen through our lungs, into the blood, heart and around the body.If we think of someone breathing at rest at about 10 breaths a minute and each breath is about 500 ml, then we can work out what our baseline oxygen uptake is. In this example, 5% of the amount we breathe each minute (10×500=5000ml, the minute ventilation) is 250ml/minute, which is the VO2 at rest; the name is derived from V – volume, O2 – oxygen. This would be the equivalent to one Metabolic Equivalent of Task; one MET; the oxygen used sitting quietly. This is of course just an example, the real values will be higher or lower based on several factors such as age, gender and weight. For this reason its units are usually quoted in ml/kg/min to try to account for the effects of size. For the example above, if the patient weighed 70kg their resting VO2 would be 3.6 ml/kg/min ie 250/70).When we exercise, we breathe in the same 21% O2 and expire 16% (although this does change a little) but increase our breathing depth and rate, hence our VO2 goes up (the % difference between the inspired and expired multiplied by the volume breathed each minute). In this way we don’t really ‘store’ oxygen; we take in what we need to burn fuels to do the work at the time.The maximum VO2 recorded when someone undergoes a CPET is called the VO2 peak: the highest recorded value usually just before we stop exercising through exhaustion. Of course VO2 peak is partly a matter of fitness- fitter people can exercise for longer and harder – but also a matter of how motivated you are to carry on exercising. Volume of co2 (VCO2) is also measured – we will hear why this is also important later. 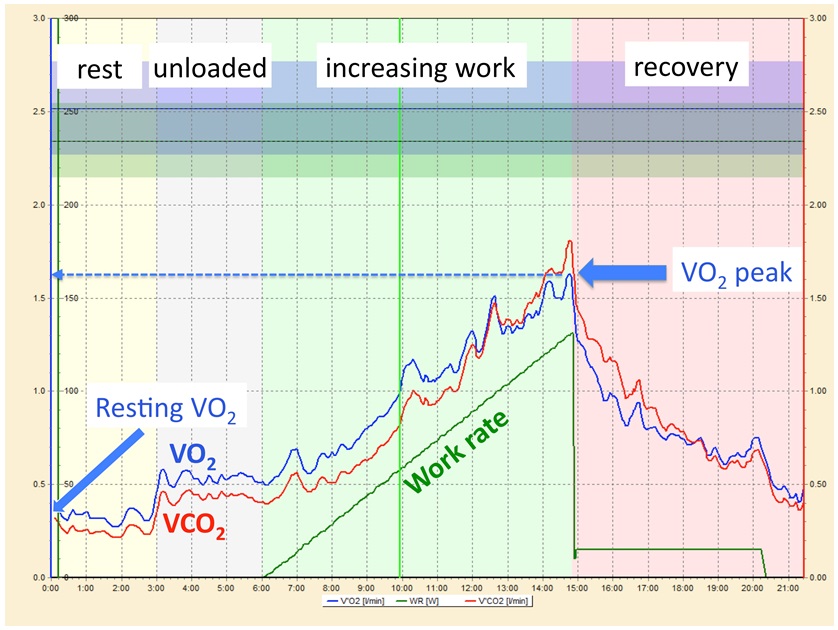 In the figure above you can see the values achieved in a CPET. On the x axis is time (minutes) and the y axis, VO2 and VCO2 (both in litres per minute) and work rate (watts). The baseline resting VO2 of about 0.35 L/min in blue rises to about 0.5 L/min in ‘unloaded’ exercise, against minimal resistance. When the work rate increases (green straight line) from 6 minutes both the VO2 and the VCO2 (red line) increase until the subject can continue no more (here at 15 minutes). In this example, the VO2 peak is about 1.6 litres a minute. As the resting VO2 was 0.35/min (1 MET as they were at rest) and the peak 1.6 L/min, the subject achieved (1.6/0.35) just over 4.5 MET. The horizontal coloured bands near the top represent predicted VO2 values.

When we start exercising, the energy we need is made almost totally aerobically (involving oxygen) and we can carry on exercising almost indefinitely. If we increase the intensity of our exercise (as we do in an exercise test) we will cross the anaerobic threshold, find it increasingly hard to continue, and eventually stop.‘Anaerobic threshold’ (also called the lactate threshold, ventilatory threshold, gas exchange threshold or lactic acidosis threshold) means the VO2 value at the anaerobic threshold. This is the VO2 at which point the body starts to get extra energy from anaerobic metabolism to add to the continually increasing aerobic metabolism. This involves metabolising pyruvate into lactate which brings with it energy, but also hydrogen ions. The hydrogen ions are buffered via carbonic acid, generating extra CO2 to the right of the equation:

As well as VO2 peak and the VO2 at the anaerobic threshold, a third value is associated with outcome after surgery: the ventilatory equivalent for CO2.The ventilatory equivalent for CO2 is the minute ventilation divided by the VCO2 at any given timepoint, but usually we quote the value at the anaerobic threshold. It can be thought of as the volume of breathing each minute needed to get rid of a litre of CO2- and so is a measure of the efficiency of the lungs at gas exchange.Lower values generally indicate more health and better matching between breathing and blood flow in the lungs (‘V/Q matching’).

How do we do perform CPET?

A CPET involves the measuring of respiratory gases (oxygen consumption and carbon dioxide production) continuously through a tight-fitting mask whilst gradually increasing the effort needed to exercise.After calibrating the equipment, a medical history is taken and the patient’s height and weight measured. They perform spirometry to give lung volume measurements that are used to calculate their predicted ‘normal’ values in the CPET. Haemoglobin is often measured to exclude anaemia, which is likely to underestimate a person’s exercise capacity as it would limit oxygen delivery. 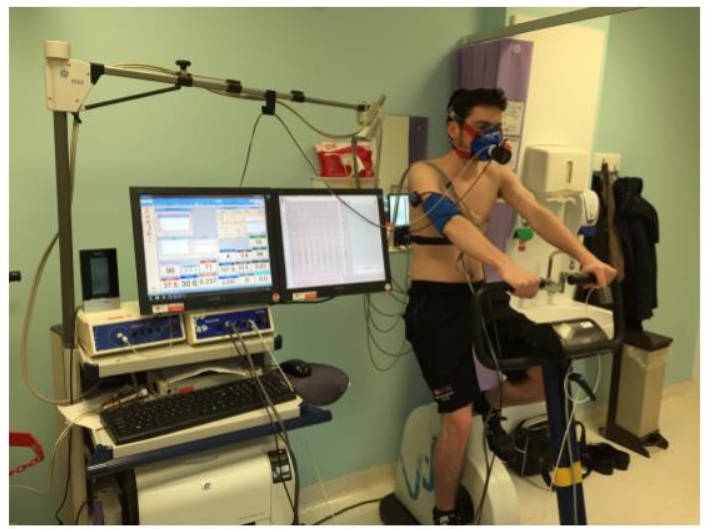 During the test, the patient often sits on a on a cycle ergometer with full 12 lead electrocardiography (ECG), non-invasive blood pressure (BP) and oxygen saturations being measured. After getting data at rest, the patient cycles gently, then against increasing resistance making it harder and harder to exercise. At some point the patient stops as they feel they can’t continue. The entire test involves only 8 to 12 minutes of exercise.

We know that in general life, quite apart from patients having surgery, fitter people survive longer and have fewer illnesses. [1] [2] It does make sense then that when people have major surgery – which involves a big ‘challenge’ to their body – that people who can move more O2 into their bodies, and hence to the cells needed for wound healing and normal organ function, would likely fare better than patients who can’t.If you can exercise a lot before needing to add anaerobic metabolism for your energy needs (higher anaerobic threshold) or have very efficient lungs (low/normal ventilatory equivalent for CO2) again it makes sense that those people might fare better if they have surgery. Interestingly some researchers say that the health of the autonomic nervous system may be more relevant. [3]

How can we use CPET results?

The data from most observational studies suggest that patients with a high VO2 peak, high VO2 at the anaerobic threshold or a low (normal) ventilatory equivalent for CO2 undergoing major abdominal surgery have better outcomes than those with poorer CPET results. [4]We can use this information in a variety of ways. CPET results can be used to guide assessing the risk of a surgical procedure, which in turn can be used to help the consent and decision making processes. [5], [6] They can be used to guide postoperative care critical care provision, as less ‘fit’ patients are at increased risk of perioperative complications. CPET results could be used as part of a prehabilitation programme perhaps, to measure, motivate and guide the exercise prescription. All of these approaches have their criticisms and problems though and need more research before we can make firm recommendations. [7]

Hi there! We hope you're enjoying our article: What is Cardio Pulmonary Exercise Testing (CPET)?
This article is part of our course: Perioperative Medicine in Action