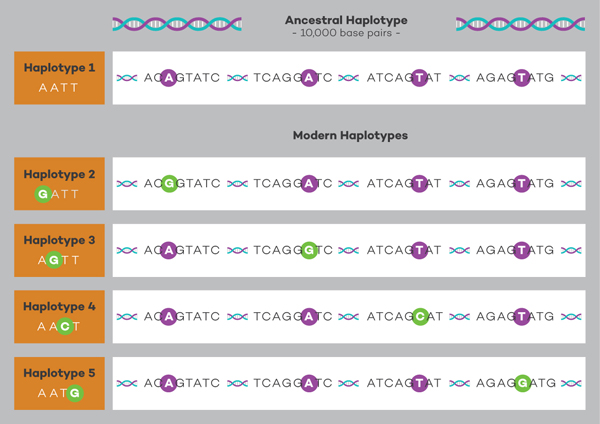 Common genetic variants are considered to be potential screening tools that could be used in disease prevention and tailored treatment regimes, and spin-off initiatives from the Human Genome Mapping Project (HGP) have led to completed maps of the common genetic variants within the genome. Gene variants (alleles) inherited together as a block are known as haplotypes. Tightly linked alleles will be inherited in tandem unless a recombination event (chromosome cross-over event) disrupts the block. The resulting haplotype pattern within each genome has been shaped by human history and reflects ancestry or ethnicity.In the illustration above we see an ancestral haplotype and 4 additional contemporary haplotypes. Most SNPs arise from a single mutation in one individual that is subsequently passed on and spread through the population over generations. In the human genome, haplotypes tend to be about 60,000 base pairs in size but the contiguous SNP signature may be eroded by recombination events.The distribution of genetic variants and haplotypes within and between populations, and the frequencies of some reflect ancestral origins.Approximately 100,000 years ago, we know that some modern humans migrated out of East Africa; to Asia; and from there to the rest of the world, and with great population expansions over time.Mutations, population admixture and population bottlenecks have arisen throughout our history.One of the aims of the HGP spin-off called the 1000 Genomes Project was to catalogue the functionally important variants with a frequency of > 0.1% in the protein coding regions of our genomes. This focus is important because the average human genome will only have a few hundred variants of significance with respect to health-related traits and most of those will lie within exons.

View Course
The data and tools from these projects have accelerated the progress of genome wide association studies (GWAS); case control and cohort studies that examine the association between variants and significant disease phenotypes. As of June 2017, a curated catalogue of GWAS studies describes 2805 publications for many important traits. Associations between common SNPs and well-defined phenotypes have been identified and reproduced in large studies, but most individual effect sizes are very small and so have not generated biomarkers with clinical utility. Furthermore, limitations in study design mean that for most traits, the predicted heritability is still not fully explained, even by large signatures of variants with small additive effects. These limitations include incomplete representation of all SNPs on the DNA arrays used to detect variants; confounding in case-control studies, for example, through ethnic variation and population structure; and false positives and/or false negatives generated by under-powered cohort studies.
© University of East Anglia

Hi there! We hope you're enjoying our article: Genetic variation and complex traits
This article is part of our course: Using Personalized Medicine and Pharmacogenetics