Teacher perspectives: responding to the evidence within lessons

Watch a teacher perspective on responding to the evidence within lessons
View transcript
6.6
JANE: I suppose it’s just approaching things in a more flexible way. Adapting, you know, even if you’ve planned certain aspects of your learning, adapting it as you go. And if you’re, perhaps, in a middle of a lesson, it might be that if things aren’t going quite as you want them to do, or children aren’t learning things as you might expect them to, I would say don’t be worried to stop the lesson. See where children are and try and assess as you are going through, and model things if you need to model it. And, again, use your children.
38.8
You know, there will be some that know what they’re doing and can explain it, perhaps even better than you sometimes, to another child in their speak that they will understand a bit better. And yeah, always, you’re just making sure that your children have learned something new in each lesson. However little it is, if they’ve learned something new, that’s great.
57
TOM: I think it’s really important to be able to be flexible within a lesson. So I think it’s important to have it in your mind that after a certain task, the pupils may not understand it and therefore, have something in your mind that you will do if that’s the case. Because you’ve always got your many [INAUDIBLE] that will identify whether pupils get things or not. But it’s what you do about that that’s the most important.

Vignettes of planning for learning

In a lesson with my Year 5 and 6 class (ages 9-11) I was introducing the new topic of light.I asked the children my planned question about how they thought we saw things by drawing a picture on the board of a person, a cat and the sun. I then the asked children to draw on their concept of how they would see the cat. The children came to the board and universally drew arrows (indicating some sort of seeing device) coming from their eyes. I asked the class to clarify their thinking and they agreed that something came from their eyes in order to see the cat. [Illustrated in the image below.]

At this point in the lesson I did not challenge their thinking, instead being aware this was a common misconception and having identified it in my children, I moved onto the practical activity I had planned to use if I needed to challenge their ideas. I asked them if we have special seeing things coming from our eyes then should we be able to see something in a dark room? They answered yes, that made sense. So I took the class into the darkest room in the school with a toy cat. This turned out to be the headteacher’s cupboard. We went in, turned out all the lights and looked. All the children agreed that they couldn’t see the cat. I asked them what was missing? Why could we no longer see the cat? After a discussion the children concluded that it was because there was no light.I asked them to think about how we saw ourselves in a mirror. They knew it was a reflection and I asked whether we would see our reflection in the dark. Again they said no as it would need light. I had purposely planned to ask them about mirrors to bring the word reflect into the lesson.Back in the classroom I put the cat in the middle of the room and asked the children to describe what was happening. They described the sunlight coming in through the classroom windows and hitting the cat. ‘Then what happens?’ I asked. Some of the light bounces off the cat and goes into our eyes was the eventual decision, after a lot of conversation.

View Course
To finish the session I got the children, who had drawn their initial concepts on the board, whether they still agreed with their drawing? All wanted to revise their ideas and erased the arrows coming from the eyes to show light being reflected off the cat into the eyes. [Illustrated in the image below.] 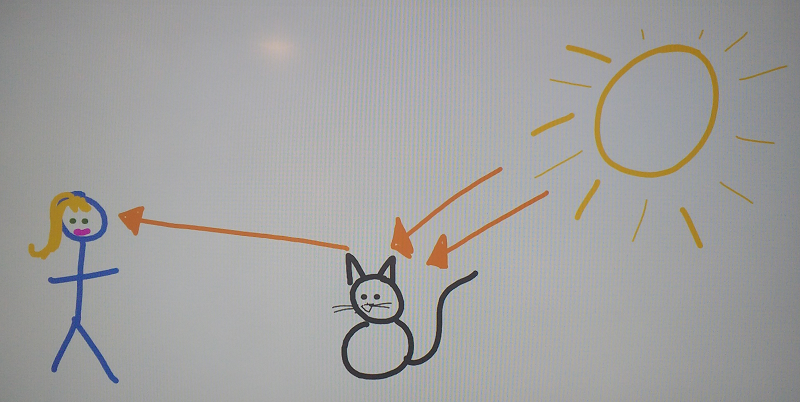 During a lesson about digestion we watched a video about digestion, discussed a diagram and labelled it with the roles of the different parts. The questions I had planned to allow me to check for misconceptions and understanding, revealed that some students thought that the food took a diversion to the liver and gall bladder to be processed, before returning to the intestines.As my students did hold misconceptions I moved us on to the activity I had planned in case they had not yet understood. Therefore, to address their misconceptions we modelled digestion using a pair of tights to represent the digestive system and ‘digested’ a sandwich. In addition to modelling the secretion of acid in the stomach, enzymes and peristalsis we included adding bile that had come from the liver (a large beaker) via storage in the gall bladder, a smaller beaker.Students later consolidated their work by writing ‘the story of a cheese sandwich’ being digested. This and the questions I had planned to check their understanding about digestion revealed that all had then changed their ideas and the misconception had been removed.

After watching the video or reading the vignettes above, what points matched your own experiences of planning to respond within lessons?

Hi there! We hope you're enjoying our article: Teacher perspectives: responding to the evidence within lessons
This article is part of our course: Planning for Learning: Formative Assessment