Portus was vital to the Roman world, linking Rome to its Empire, supporting the largest city on Earth. What will I learn about it here?
View transcript
7.1
GRAEME EARL: Welcome to Portus. Or rather, welcome to a studio in Southampton in the UK. You’ll be in Italy soon, I promise. But first a few words of introduction from me. I’m Graeme Earl, co-director of the Portus Project and based here in the archaeology department at the University of Southampton. I’ll be guiding you through the next six weeks of study, along with my colleagues Simon Keay and Dragana Mladenovic, and lots of other researchers and students. My research is focused on the ways in which digital technologies can help us to record and interpret the past. And behind me now is a first view of the place we are going to study in detail in two weeks time.
47.2
It’s a building called the Grandi Magazzini di Settimio Severo– the great store rooms of the Emperor Septimius Severus. But as you’ll find, the view behind me isn’t real. It was made by my colleague, Grant Cox, on a computer, after very careful examination of the archaeological evidence. Even more confusingly, despite its name, the great warehouse of Septimius Severus was in fact built before Severus’s reign. Things aren’t always clear cut in archaeology, and Portus can be a confusing place. So in the next few weeks, you’re going to learn how to be an archaeologist and learn how to navigate the largest, and most important port in the Roman Mediterranean.
88.7
You’ll work as a researcher on the Portus Project and in week six, you’ll be able to join us, virtually, as we start another season of excavations in Italy. Along the way, you’ll have the chance to listen to and meet many of the researchers and other students working at the Roman port. First, let’s get out into the sunshine next to the Imperial Palace at Portus, and meet Dragana Mladenovic.
112.4
DRAGANA MLADENOVIC: I’m Dragana Mladenovic. I’m a lecturer in Roman archaeology and the director of the Portus Field School.
118.2
GRAEME EARL: Dragana will be introducing you to archaeological research in general, and specifically to the process of excavation. She’s been excavating at Portus since its beginning, and she’s an expert on multiculturalism in the Roman Empire. This course is based in large part on the work of another colleague, Professor Simon Keay.
137.2
SIMON KEAY: Hello. I’m Simon Keay. I’m head of archaeology at the University of Southampton and also a director of the Portus Project.
144.9
GRAEME EARL: Simon has been working in Italy for many years, including as director of archaeology at the British School at Rome. And he’s a leading expert on the ports of Portus, Ostia, and Rome. So what are you actually going to do? This course takes you on a journey from the very large– the whole Roman Empire– to the very small– a tiny bronze coin or perhaps a tiny charred seed. It will also take you from the earlier days of the empire in the first century AD, through its height under the Emperor Trajan, and its eventual collapse and replacement by the Germanic kingdoms and Byzantine power during the later fifth century and sixth century AD.
186.7
Each week, you’ll cover a new period of Roman history and examine a new approach to archaeology, like geophysics or satellite imagery or excavation. Archaeologists are equally interested in the arts, the humanities, and the sciences. So you’ll see what role history, geology, biochemistry, and other disciplines play. Each week, you’ll also study one of the many surviving buildings, and also look at how the finds of that period shape our understanding of the place, its trade with the rest of the ancient Mediterranean, and the people who lived, worked, and died there. As you know, the course lasts for six weeks and will take you two hours per week to complete the various activities. Don’t worry about there being lots of different steps.
234.8
The videos are short, and you’ll have plenty of time to reflect and discuss your ideas. If you’re particularly keen, you can also opt to complete the advanced steps each week. These will take you a bit longer, and give you more of a chance to do your own research. Not doing those steps won’t in any way affect your progress on the course though. Try to complete the course in weekly segments, so that you can learn from your peers studying the same things in that week. We’ll be accessible on the forums throughout, and also on the course blog. So, time to get started. You’ve got a short article to read about the Portus Project, of which you are now a member.
276
And then you’ll make your first visit to the real store rooms of Septimius Severus in the company of Simon Keay. I’ll see you at the end of the week.

Having signed up for this course and watched this video you will know that Portus was a vital part of the Roman world, connecting Rome to its Empire, and supporting the largest and most prosperous city in the Mediterranean Basin. On this course you will learn to be an archaeologist, using a range of methods to study the finds and buildings. It’s the second time we have run the course and we hope that we have managed to provide even more opportunities for you to explore the site that we spend so much of our lives thinking about. As you have heard the course starts with the very large (the Roman Empire) and ends with the very small (specific finds). It also goes from the first century AD through to the seventh century AD. In the end you will think about how to work across scales of analysis and across time, and how to link together objects and buildings from different parts of the site using a variety of methods.Each week Simon Keay, Dragana Mladenović or myself will introduce you to new topics and at the end I will summarise the topics. 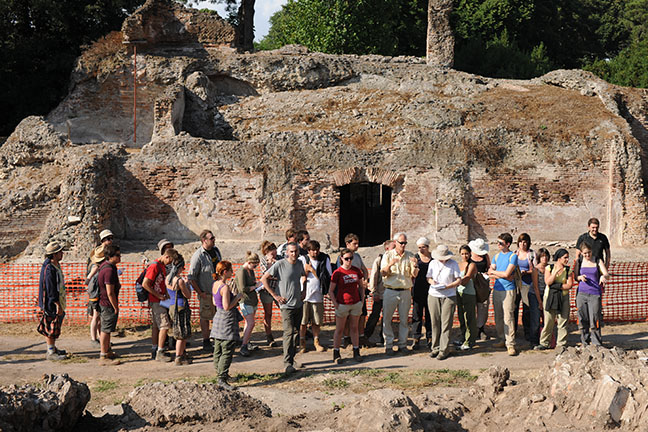 Simon conducting a tour on site – you will have your own virtual tours as the weeks go on – Hembo Pagi © University of SouthamptonSince I recorded this video we have increased the timetabled hours for the course from two hours a week to four. Everything you need to study for four hours each week and to answer the quiz questions is contained within this course. Sometimes we will provide [Extra] sections that give you a chance to study a bit more more, but please mark the steps as complete whether you do the [Extra] sections or not.So, each week has the same structure:

View Course
Almost all of the dates in this course are AD, ‘Anno Domini’, after the birth of Christ, as opposed to BC or ‘Before Christ’. For example the foundation of Portus by the emperor Claudius took place in AD 46. This is in the 1st century AD (i.e. in the first hundred years AD). The word ‘century’ is usually abbreviated to c. so for example the expansion of the port by the emperor Trajan in AD 110-117 took place in the early 2nd c. AD. Just to confuse things, the letter c. is also used as shorthand for ‘circa’ (Latin for ‘around’ or ‘about’) so you will also read things like “the columns were c. 6 m high”. Don’t worry, the context will make it clear which c. is which, and understanding this special language is all part of becoming an archaeologist!One final point, we are running this course at various times of the year. Sometimes it coincides with our fieldwork on site and other times not. In this case we will not be excavating during the course so week six will be based on our work from summer 2014, plus opportunites to explore topics that build from it. Week Six content will be supplemented as the weeks progress.Graeme Earl 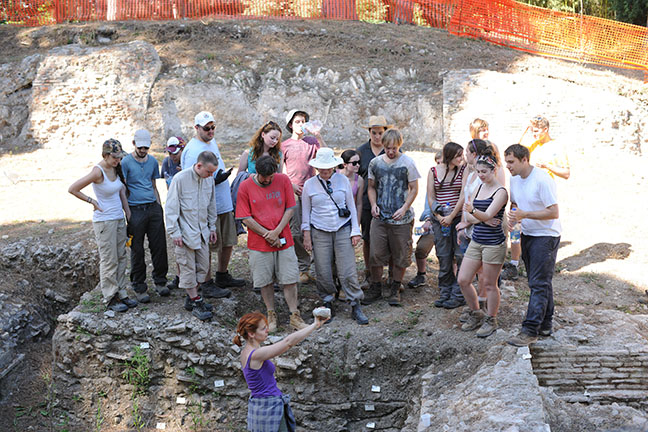 Hi there! We hope you're enjoying our article: Course structure and content
This article is part of our course: Archaeology of Portus: Exploring the Lost Harbour of Ancient Rome