Fragments of Amphorae from the Roman World

In this article, we talk about the recovered fragments of amphorae from all over the Roman world, including Tripolitania (modern Libya).
View transcript
5
HOLLY WALKER: And these are all different bits of amphorae. And this is the bottom of one.
9.2
SIMON KEAY: That’s right.
10.3
HOLLY WALKER: So why do they have a cone-shaped bottom?
12.6
SIMON KEAY: That’s a very good question. Well, as you say, this is a bottom of an amphora. And this is the bottom of a very large, sort of cylindrical-shaped amphora that comes originally from where modern Libya was in antiquity, which is ancient Tripolitania. We know that by the nature of the clay fabric, as we call it. In other words, if you look at the break there, when you do that, you’re looking at the clay matrix that the sherd is made of. And you can see lots of little bits of lime. And work by previous scholars has shown that that is particularly frequent on material that’s made in North Africa.
64.2
That in conjunction with the form and the surface treatment and with other parts of what’s come from the same vessel, like this, means pretty certainly that this has come from ancient Tripolitania, modern Libya, and pretty certainly, it’s probably come from the hinterland of the great port city of Leptis Magna, with whom Portus had a very close commercial relationship in the late second, early third century AD.
96.5
HOLLY WALKER: And you said these are from different areas, they’re made. And I mean, they’re different sizes. Is that because they’d hold different things or because they’re from different places?
105.3
SIMON KEAY: That’s a very good question. One of the problems is that in many cases, we don’t know what they contained. There are all kinds of academic arguments as to what these things contained. Kind of the overall consensus is that quite a lot of these from Tripolitania, Libya, probably carried olive oil and other similar kinds of form, but with different details on the rim, came from what’s now Tunisia, and may well have carried olive oil as well, or fish sauce, which was a culinary favourite of the Romans. In some cases, even wine. So it varied quite a lot.
151.6
HOLLY WALKER: Is there any way to actually tell? Is there ever any residue or anything? Or is it just–
156.3
SIMON KEAY: Good question. Very rarely, unless you get them in wrecks. And sometimes you find that there’s pitch on the inside. Some people argue if there’s pitch on the inside, it could well have carried one type of product. If it doesn’t have pitch, then it might well have carried something else. There are also special analytical techniques like gas chromatography or lipid analysis, where you actually analyse traces of the original fat, whether it’s vegetable fat, olive oil, or whether it’s fish oil fat, which have kind of leached into the clay. And there are certain kinds of sensitive chemical and analytical techniques that can supposedly distinguish between them.
206.3
It’s quite a fine art, and there’s a lot of polemic about it, but it helps.

Finds, or ‘artefacts’, are an important type of archaeological evidence on any site. They have two main roles. Artefacts such as coins, pottery types, even the style of construction of the walls can tell you information about dating. This dating, tends to be relative i.e. older than/younger than other similar items initially, but when combined with typologies of many different artefacts on several sites, certain artefacts can give dates with an accuracy of around 20-50 years.

In cases where there are a considerable number of standing walls such as at Portus, the artefacts on floors under the collapsed walls and even within the demolition rubble are important for understanding a site not only during its occupation but also when it was derelict or being pulled down.

These artefacts can tell you if people were living, bringing up their children, or burying their dead there, whether they were rich or poor, Roman or foreign. It does not depend on the size of the artefact, more its presence, right down to the smallest sherd of pottery, and its location, which is why it is important to handle/record/conserve artefacts properly and collect everything on site.

There is no substitute for actually handling finds, but that doesn’t mean you have to travel to Portus! In the coming weeks we hope that you will start to take a whole new interest in the objects that are around you every day. Start thinking about the things you discard, or the ways you decorate your home, or the clothes you wear, and what these could tell future archaeologists about your background, your likes, your family and so on.

In terms of becoming familiar with Roman finds you might be able to visit a nearby museum and find objects similar to those at Portus. But if you don’t have time then search for the types of objects we describe on-line to get a better sense of their diversity. This will help you to get a better understanding of the construction and use of these objects. Remember though that fragments of objects appear quite different from the whole – its only when your cup is broken that you throw it into the bin!

‘Taphonomy’ (the study of how objects decay or fall apart) allows us to understand the ‘biography’ of an object. This might sound like a weird way of describing a broken teacup but it means that we try to understand what happened to make the fragments we have in front of us. Something that would have been easily recognisable to us when it went into the ground will frequently change completely in form. The chemical and physical effects of long term storage underground may change its appearance through pressure, corrosion (drawing out the elements to the surface, resulting in rust for example or surface pitting, eventually destroying the object completely or leaving a hollow shell), delamination (surface peeling off) or concretion (other objects such as stones welded into the corrosion). These processes can continue after the object has left the ground unless treated properly and so we assess finds for any conservation needs.

This video was focused on some of the more common varieties of amphora that we have found at Portus and how we can use them to track the many trading connections that existed between ports around the Mediterranean and Portus.

In the video we focused upon amphorae fragments that derive from Tripolitania, a Roman province that largely corresponded to the western part of modern Libya. Over the last forty years or so, archaeologists specializing in the study of Roman amphorae have identified some of the kilns and production areas along the Libyan coast, notably in the hinterlands of Tripoli (ancient Oea) and Leptis Magna, near modern Al-Khums, but also further inland. They have identified at least three principal shapes and characterized the clay from which they were made. 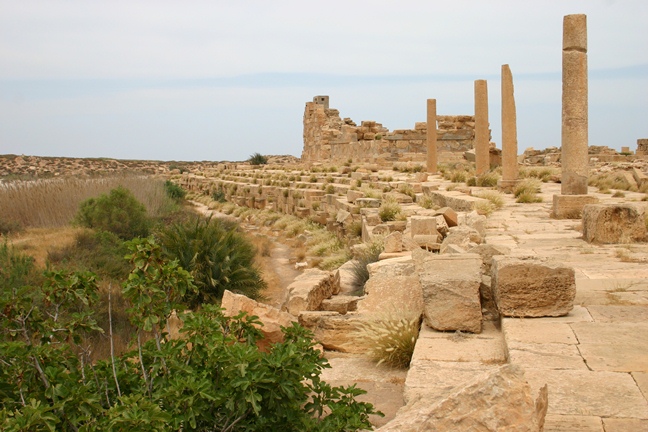 The harbour at Leptis Magna – Simon Keay © University of Southampton; (Note: You can see an approximate equivalent view of this area today via Google Maps 3D – these do not work on all mobile devices).

They have also pieced together evidence for their main periods of production, namely between the later 1st and the 4th c AD, and suggested that they mainly transported olive oil, much of which was destined for Rome. Awareness of all this evidence has made it possible for scholars working on material from excavations at ports across the Mediterranean to also identify Tripolitanian products amongst their many ceramic fragments, and to use these as evidence for trading connections between their sites and ports in Tripolitania.

The ceramic specialists working with the Portus Project have closely studied the large numbers of Tripolitanian amphora sherds from our own excavations and have concluded that many of them came from the production area around Leptis Magna in the later 2nd and early 3rd c AD.

Holly enjoyed talking to Simon about this particular Tripolitanian amphora sherd, but there were a lot of technical terms. She has picked out some things that you might want to think a bit more about.

Simon talked about the clay matrix which refers to the material that the ceramic is made from. Technically, the matrix is the fine material that contains larger grains, called inclusions. A careful analysis of these inclusions and their clay matrix helps us to confirm that this particular sherd did indeed originate from Tripolitania.

In some cases the surface treatment of ceramics might be useful because certain classes of amphora, such as those from the area of modern Tunisia for example, have a characteristic white surface treatment that comes from wetting the pre-fired vessel with sea-water.

Holly asked about what the vessels may have contained. You may have expected olive oil and wine, but fish sauce is even more interesting, and more typical of amphorae from southern Spain (around modern Cádiz) and Tunisia. 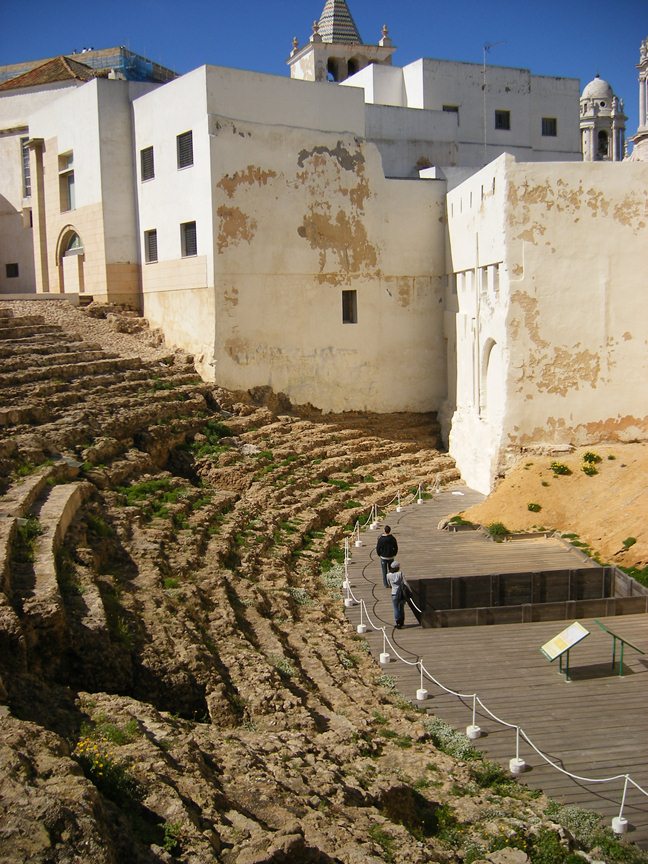 Simon also suggested that, particularly in ceramics from wrecks, the presence or absence of pitch is important because it might be an indication that an amphora carried wine.

Finally, Simon mentioned some analytical approaches. Gas chromatography can distinguish between different kinds of animal and vegetable fat that may have impregnated the inner surface of the amphora in which it had been carried. This can provide a clue as the original generic content of the amphora.