Where did the sailors unload their cargos?
View transcript
5.1
SIMON KEAY: So where are they unloading their cargoes? The Portico of Claudio is located, effectively delineates, the Western side of a massive complex of buildings. The buildings consist of, over here, we have a very, very large complex of warehouses known as the Grandi Magazzini di Traiano, the great warehouses of the emperor Trajan. And in front of us, we have a great colonnaded road, which runs for about just under 200 metres eastwards. Now, what we understand is that the origins of this complex lie in the very, very early stages of the development of the port.
53.9
Archaeological work by Italian and French colleagues show that the very origins of this building lie with the establishment of the port by the emperor Claudius, but that also the building has a very long history and is used right the way through from the mid first century AD, right the way through until the late antique period of the fifth and the sixth centuries. Much of what you see, however, dates to the second and the third centuries, and what you see straight down to my left are a whole series of massive store rooms into which goods unloaded from the ships that would have been moored here were deposited.
98.3
And behind, we have a massive rectangular basin, which is about 150 metres long and onto which open a myriad of store rooms on two storeys for the storage of grain probably, certainly at least in the second century AD onwards.

The Portico di Claudio was part of a massive complex of buildings – it effectively translate as porch or arcade of Claudius although the term portico is in fairly common English usage. The complex of warehouses that we know as the Grandi Magazzini Traianei (the great warehouses of Trajan) exist from the early stages of the port but have a long history of use. We usually refer to “warehouses” but might also talk about “storerooms” in order to refer to the individual rooms in these structures. For example, analysis of the architecture of storerooms can indicate the goods stored in them.From the Portico you could have walked along the colonnaded road and into the Foro Olitorio, which was probably also used for storage of goods. The name of this derives from the latin “Forum Holitorium” meaning vegetable market. As often at Portus, there is some uncertainty about this interpretation – effectively based on architectural parallels between this building and a possible equivalent one in Rome.The rectangular basin is known as the Darsena. Simon referred to this earlier, since it was a part of the original Claudian harbour complex but also a vital component in the revised system under Trajan. The function of the Darsena isn’t entirely clear but may have been related to loading of grain and other goods from the adjacent warehouses onto the river craft for transporting by canal and the Tiber up to Rome. As a point of interest, there is a modern part of the Fiumicino port that is referred to as the “Darsena”. A quick search will show it to be a similarly sized, enclosed, protected basin.The Grandi Magazzini di Traiano has been the focus of recent excavation and study by Evelyne Bukowiecki on behalf of the University of Provence, École Française de Rome, and the Soprintendenza Speciale per i Beni Archeologici di Roma. The building is a warehouse, at least two stories high, situated on the three sides of the Darsena. The first phase of the building, evidenced by large reticulate-faced concrete foundations, is attributable to the Claudian-Neronian period. 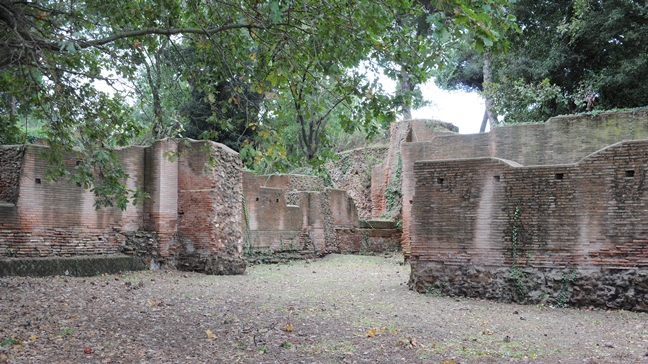 The Trajanic Warehouses as they are today, after partial reconstruction – Simon Keay © University of Southampton

View Course
Reticulate-faced refers to a Roman method of wall construction in which square bricks are set in mortar to present a diamond chequerboard effect. This was known as Opus reticulatum. Reticulate in this context effectively means “like a network”.Subsequent work and additions to the structure occurred in the Antonine, Severan, and Late Antique periods. The structure is a series of storerooms, 150 on the ground floor alone, made of brick- and reticulate-faced concrete and each with an average width of c. 6m and depth of c. 13.5m. Many of the rooms have “suspensurae”, piers of bricks that would support a suspended floor, suggesting the storage of grain. The storerooms on the ground floor alone have a total storage surface area over 1 hectare.In the second part of this activity you can read about a rather smaller building that was in use during the Trajanic phase of the site – the “Lanterna” or Lantern baths, named after the small lighthouse that ends the quay on which they stand.

Hi there! We hope you're enjoying our article: Grandi Magazzini Traianei and the colonnaded road
This article is part of our course: Archaeology of Portus: Exploring the Lost Harbour of Ancient Rome