Bone and other animal remains are found quite commonly at Portus. 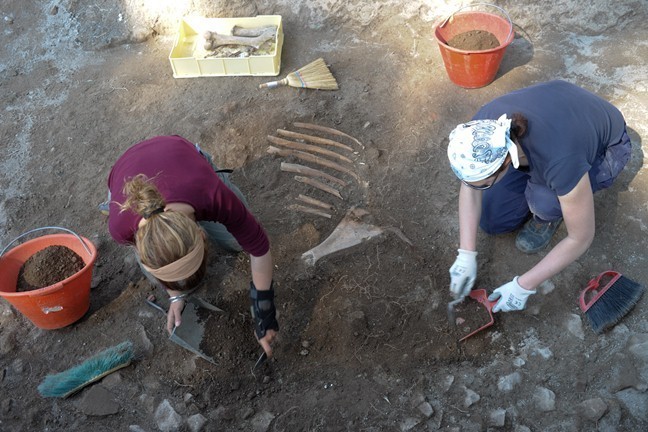 Bone and other animal remains are found quite commonly at Portus. Bone can be recognised during excavation as being lighter and less dense than stone or pottery, and it can be different colours or burned. We will discuss the significance of human bones in Week Five. Animal bones can tell us a great deal about the use of particular areas and also about the environment, economic and other connections, and diet. Our faunal remains expert Sheila Hamilton-Dyer demonstrated early on that the faunal remains have a lot to tell us. The most common reason for the presence of animal remains relates to food, and in this case the bones will be disarticulated. Occasionally we have find partial burials of animals, and very rarely complete skeletons like that above. Bone from near-surface contexts is not well preserved in the acidic soil conditions, often affected by plant root erosion and incomplete. Excavators must be very careful not to break these friable materials. Bone from deeper contexts is, however, much better preserved.In addition to bone from animals used for food uses, and as work or wild animals, we also recover bone artefacts. Animal bone is found having been used to make various small items such as needles, dice, hinges etc. which count as special finds. The third source of bone is the flotated samples described in the previous step.Most of the bones are from large mammals but we also see amphibians and reptiles, fish and birds, from more than two dozen species. We even have an ostrich, which must have been imported from Africa.In addition to bone, there are also a large number of shells on site, often clams and land snails. These are all collected (we now have at least 6000!) as they can give a good indication of either the presence of water (very small clam shells are not collected for food, therefore they are naturally occurring) or the conditions of the land. Very occasionally land snails may get up and walk out of the finds tray…Discussion topics:
© University of Southampton

Hi there! We hope you're enjoying our article: Zooarchaeology at Portus
This article is part of our course: Archaeology of Portus: Exploring the Lost Harbour of Ancient Rome