Kris has introduced nicely how the scale of geophysical surveys affects the resolution of the data and therefore what we can actually detect within the datasets. An Electrical Resistivity Tomography (ERT) survey with probe intervals of 1m will detect much smaller features such as walls at shallower depths than a survey with probe intervals of 5m which will penetrate deeper, but only detect large subsurface features such as channels, canals and palaeo-channels. As such in a geophysical survey we tailor the survey to each individual site. 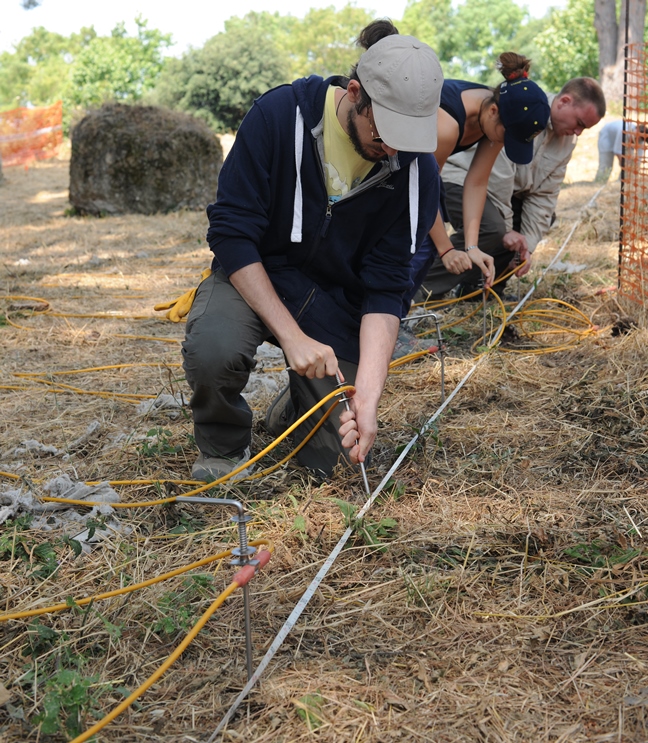 Students laying out an ERT transect at Portus – Hembo Pagi © University of SouthamptonSurveying a large landscape such as the Portus landscape with ERT would take a very long time to undertake as it is a slow technique. Magnetometry on the other hand is quick and efficient. Over the port itself approximately 250 hectares of magnetic data has been collected with a further 170 hectares collected to the south of the Fosse Traiana towards Ostia Antica.It would be time consuming to collect this amount of data with other techniques, so areas are targeted based upon the results of the magnetometer and the results integrated. Using ERT and GPR in small areas has enabled high resolution coverage over important aspects within the port itself including 3-dimensional information. Combining different methods is important so we can attain a more comprehensive knowledge of the site. Each technique measures different properties of the subsurface; for example magnetometry measures the magnetic field and electrical techniques measure the ability of the subsurface to conduct an electrical current. If we used one method only we could miss obvious features that would be detected by a different technique. In a high magnetic area, for example Pompeii, magnetometry would not work well (if at all!) so ERT or GPR would be appropriate methods.The geophysical data can also be complemented and integrated with other methods such as remote sensing images. Data can be collected from satellites, airplanes and UAV (Unmanned Aerial Vehicles or drones) and includes panchromatic imagery, colour imagery, multi-spectral imagery and thermal imaging. These images can be processed to show different colour bands that highlight various features.

View Course
Aerial photography has been of great use at Portus, in particular imagery that was taken by the RAF during reconnaissance flights in 1943 and 1944. These images show archaeological features that were visible 70 years ago but are now covered by modern developments.

Hi there! We hope you're enjoying our article: Combining different methods
This article is part of our course: Archaeology of Portus: Exploring the Lost Harbour of Ancient Rome