Marble and the Mediterranean

What do the fragments of marble found at Portus tell us?
View transcript
5.1
SIMON KEAY: One of the most exciting and in fact, one of the most frequent finds we have at Portus is marble. Now, we find marble decorating the insides of buildings. We find marble lying loosely around. And this is a great reminder that while Portus imported grain and other food stuffs and so on, it was also the point of entry for marble from across the Mediterranean basin. And we can imagine, therefore, if we look at the material that’s come up on the site, we know that we have a lot of marble from North Africa. Giallo Antico for example. We have marble from the East Coast of Spain. We have marble from Egypt, porphyry. We have marble from Asia Minor, from Greece.
55.4
And all of this marble came to Portus because ultimately it was destined not just to decorate the port buildings. Indeed, like our own Palazzo Imperiale which is very richly decorated, but it was actually destined for the capital. So what happened was the marble was imported in large seagoing ships, and it would have come into the port system on the Fiumicino Canal, which lies just to the south of where I’m standing now. And then it would have been unloaded on the south side of the canal, in an area known as the statio marmorum, which is essentially the marble yard.
94.9
Which from the late first century AD was the point where marbles assembled before then being shipped up to Rome on smaller boats to another point in the city of Rome, which was also called the statio marmorum. And from there, it was redistributed to the different building projects within the capital. And indeed, from the late first century AD onwards, one thinks of monuments like Trajan’s Forum. One thinks of the great palaces on the Palatine, and the temples that peppered the city. One has to think that all of these public buildings were clad with marble that had passed through this port complex, by the system I’ve just described to you.
139.7
So marble, again, is a really important find at Portus, and tells us a lot about Rome’s relationship with the Mediterranean.

We’ve seen from Simon’s video that the large amounts of marble at the site remind us that it was a key entry point for these high value commodities from across the Mediterranean, North Africa, the east coast of Spain, Egypt, Asia Minor and Greece. This must have been a key focus of activity throughout the 2nd and earlier 3rd centuries AD when Rome was embellished with new public buildings by a succession of emperors keen to legitimize themselves with major building programmes. We can also see the extensive use of marble in Ostia in public structures such as the Forum baths, constructed at the end of the 2nd century AD.Giallo Antico is a beautiful variety of the marble that was imported from Tunisia, stored here and then used in great monuments such as the Forum of Trajan in Rome. Egyptian Porphyry was another beautiful marble, this time purple. The University of Southampton has done extensive work at the quarries known as Mons Porphyrites in the Eastern Egyptian Desert. 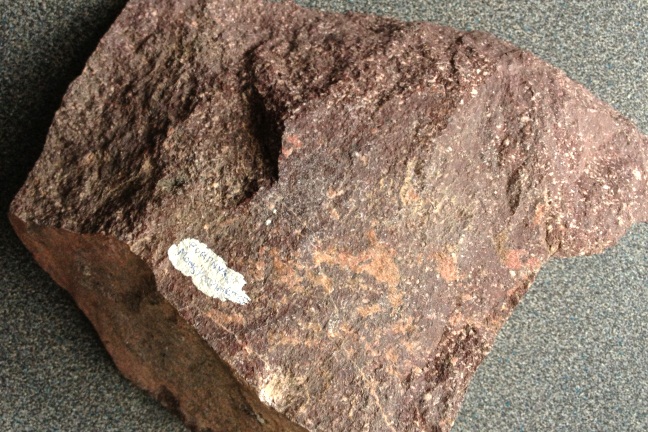 Sample of Egyptian Porphyry from Mons Porphyrites – Dragana Mladenović © University of SouthamptonWe also worked at Mons Claudianus, the source of Granodiorite used extensively in Rome before, during and after our current focus of the later second century AD. We also excavated at nearby Myos Hormos, a Red Sea port that linked the Rome to India via the Nile and a tortuous desert crossing.The statio marmorum (marble yards) at Portus may also have been used for the re-distribution of marble into the Mediterranean from eastern quarries to such port cities as Leptis Magna, in Tripolitania (eastern Libya). There may even have been sarcophagus workshops here too.

View Course
Have a look at the Glossary and search online to learn more about the statio marmorum at Portus, which were located on the south side of the Canale di Fiumicino and the north side of the Isola Sacra. Large pieces of semi-worked and uncut marble found here in the late 19th c. are now on display close to the Museo Ostiense at Ostia Antica. The Glossary will also provide you with information about the statio marmorum at Rome itself, which was situated on the east bank of the Tiber near Monte Testaccio.

Hi there! We hope you're enjoying our article: Marble and the Mediterranean
This article is part of our course: Archaeology of Portus: Exploring the Lost Harbour of Ancient Rome
close