Find of the week – uncovering the Portus head

What is it like to discover great finds? Simon’s description of finding the sculpted head really brings the discovery, and the statue, to life.
View transcript
5.1
SIMON KEAY: One of the most exciting events that’s happened to me at Portus was discovery of the famous sculptured head, which today we think is probably the representation of a fisherman although we had previously thought that it might have represented Ulysses. Now I remember very, very clearly, back in 2009, we had just begun to very carefully remove the top surface of the western part of the excavation prior to undertaking the more careful troweling and hand-picking that we usually employ to uncover structures. And I remember the earth-moving machinery very carefully removing topsoil. And I just saw a flash of white.
58.9
And so inevitably, I said to the machine, stop, no more, I’m just going to go and have a look at this. So he stopped. And I went and had a look. And for a moment, I recoiled because I saw this face staring up at me out of the ground. And for a minute, I really thought this was a human face. And that something terrible had happened overnight. It really looked like a live human face, half-buried in the soil. And went closer and, of course, I then realised it was a sculpture. And initially, my thought was, this must be a medieval sculpture because very, very fine, refined features and very clearly expressive.
102.8
But then, of course, as I got closer, I realised that it was indeed an ancient sculpture. And so I cleared away just a little bit of the earth and took a series of photographs of which this image is one of them. And I must say that it was an electrifying moment. I actually knew that I was the first person to see that face in 2000 years. And I quickly called over my colleagues. And we very, very carefully took photographs, recorded its position. Although, at the same time, we were really, really keen that we wanted to actually pull it out of the ground.
139
But of course, being well-trained archaeologists, we knew that we had to record its position, make sure that we understood its context, and recorded everything properly before the more painstaking process of removing it from the ground began.

Simon’s wonderful description of finding the sculpted head really brings the discovery, and the statue, to life. Ongoing analysis of the style and carving of the piece suggests that it dates to some time around the later 2nd or early 3rd centuries AD. 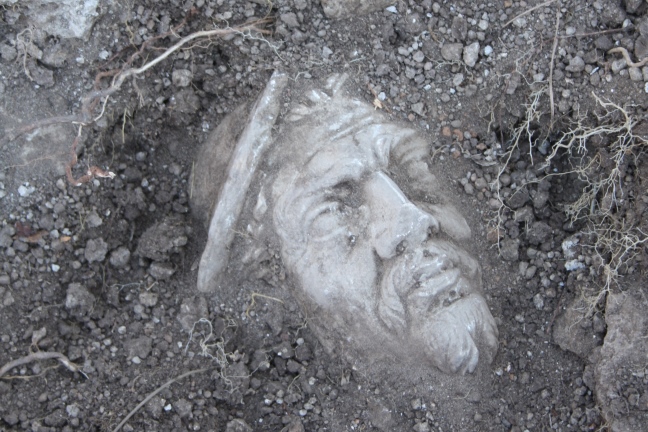 Simon’s first view of the statue – Simon Keay © University of SouthamptonWe had originally thought that it might represent Ulysses, but careful ongoing research by our sculpture specialist suggests that it is more likely to represent a fisherman. It originally belonged to a full statue that no longer survives that will have formed part of a group of sculptures, possibly in some kind of garden setting. Unfortunately, however, nothing is known of its original position, and it was found amongst late 5th c. AD demolition debris from the Palazzo Imperiale.Excavations undertaken at the site in the 1860s revealed a number of sculptural fragments from the Palazzo Imperiale, as well as from elsewhere at Portus, emphasizing their richness and variety.Work on other statues, including our work on the Amazon statue from Herculaneum, has demonstrated that they were frequently painted to appear more lifelike. Sometimes statues could also be draped in textiles and given jewellery. Statues such as this therefore may have been perceived as being much more ‘alive’ to people of the time than we consider them today.We did a lot of work recording the head, including techniques that you will learn more about next week, like laser scanning and photographic imaging. We were able to create a precise three-dimensional model and in turn to produce 3D printed replica versions of the statue which help us to communicate its form and give us more opportunity to touch the surfaces, without interacting with the real object. Some new technologies called ‘haptics’ even allow us to ‘feel’ digital artefacts like this one, without even having to create 3D printed replicas. Hi there! We hope you're enjoying our article: Find of the week – uncovering the Portus head
This article is part of our course: Archaeology of Portus: Exploring the Lost Harbour of Ancient Rome