In the method that we use for excavation it is extremely important to record and remove distinctive contexts separately.
View transcript
5.3
DRAGANA MLADENOVIC: I’m here with Tom and Jenny and we’re going to discuss how we excavate here at Portus. So how do we excavate?
12
JENNY ARDAGH: By context. So we record and excavate different depositional layers separately one at a time.
19.1
DRAGANA MLADENOVIC: OK. So what can be a single context?
22.3
TOM WARREN: Something such as a depositional layer, parts of a structure as well. We have cuts and fields of ridges and also collapsed structures. And these all tend to represent a single event in time.
32.9
DRAGANA MLADENOVIC: Right. So why do we excavate this way? Why do we keep it separate by context?
38.6
TOM WARREN: The main reason is that it gives us a really good understanding of the stratigraphy. Because you never really have layers one on top of the other. It’s all mixed in together. It’s quite complicated as well with the human activity and then the natural activity. Another reason is because we can get a great feel for the differences in features. We can understand the similarities, their position within the site. And another reason is also dating. The finds can be related back to a specific context, and then this can be all sorted out back at HQ. If you combine all these things together, you can create a really good picture and understand all the contexts and how they work.
78.3
DRAGANA MLADENOVIC: So how do you know that you have reached the different context?
81.9
JENNY ARDAGH: It can sometimes be quite confusing, but it’s usually either colour, consistency, or component– a change within that.
89.1
DRAGANA MLADENOVIC: And how do we record context?
91.7
TOM WARREN: Well firstly, you have to give the context a number. And this is a unique number because the site’s huge and there’s many different trenches and buildings and what not. So you give each context a specific number. And then we can expose this to photography, or levelling using the total station. The next stage would be to excavate it. And any finds from the context are recorded separately. We can take a sample, which gives us a picture of the overall environment around the site. There’s obviously filling in the context sheet, which does include the consistency, the soil, any finds you get. And then finally, you can use planning or scanning.
131
But most importantly, you should do a recording of the section.
134.4
DRAGANA MLADENOVIC: So what if you are not sure that what you are coming onto is actually a different context?
140.1
JENNY ARDAGH: It’s always better to be safe than sorry, really. So you assign a different number to each context that you think are separate, and separate all of the finds from each one. And then later on it will become clearer as to whether they were separate or whether they were the same one.
154.5
DRAGANA MLADENOVIC: So why do we take soil samples out of different contexts?
158.1
TOM WARREN: Well, these contain plants and animal remains, and these help us reconstruct the environment. And they can show us the ecology and the economy.
166.3
DRAGANA MLADENOVIC: OK. So how many contexts have you excavated so far?
169.8
JENNY ARDAGH: Including the one we’re on now, I think it’s around 20. Including post holes that we found on each different layer. And they’ve changed quite substantially each time. So we’ve had a quite black layer, and lots of sandy layers, and an orangey pinky layer which had a lot of pottery in it.
190.8
DRAGANA MLADENOVIC: And do you have any idea what they are?
195.4
JENNY ARDAGH: Well we’re hoping that we’ve now reached maybe the Trajanic floor. But now we’re getting past the excavation that was done in 2011, so we’re not quite sure about what we have reached.
210.4
DRAGANA MLADENOVIC: OK so once we have recorded and excavated all of these contexts, how do we make sense, how do we put them together?
218.1
JENNY ARDAGH: You basically create a stratigraphic sequence into a matrix. Which shows the interrelation between the chronology of each context.
227.8
DRAGANA MLADENOVIC: OK. Thank you both very much, and I’ll let them get back to their work.

You’ve heard from Jenny and Tom more about the way that we excavate. In the method that we use it is extremely important to record and remove distinctive contexts separately, by removing the latest context first, one at a time. This reversed chronological sequence of removal is crucial as it ensures that there is no danger of damaging one context through the removal of another. It also ensures that each unit of stratigraphy and the finds that come from it are treated separately. 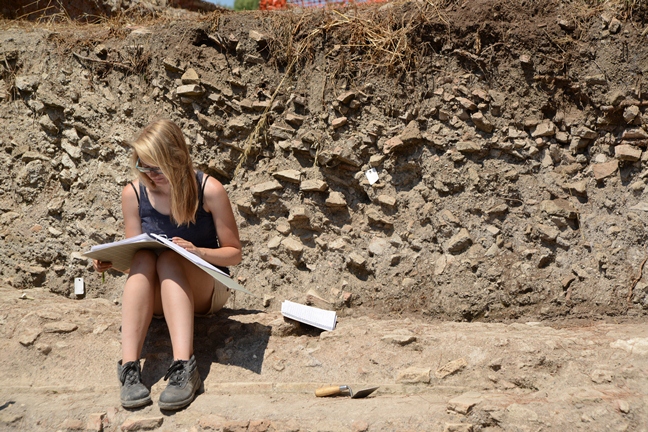 Student checking the next available context number to assign – note the labels in the section of the trench behind, indicating already numbered contexts – Hembo Pagi © University of SouthamptonJenny and Tom used the term depositional layer to refer to these units of stratigraphy. This is because most of the contexts in their trench were layers, and indeed the two are almost synonymous, as the majority of all contexts that an archaeologist deals with are layers. However, one should never forget that contexts can consist of a number of different formations that are a result of a single deposition event. We discussed this last time.In an ideal world the layers would be superimposed on top of each other, with younger ones overlaying the older ones. But in practice that is rarely so. We often find later contexts that cut into earlier ones, sometimes cutting through more than one earlier layer. Equally, one can frequently see two contexts abutting each other, and in such cases it is not immediately evident if the two are contemporary or not. This is where finds can help us understand the chronology (which is why it is so crucial to always know the context from which they derived), but relationship with other contexts can also help. 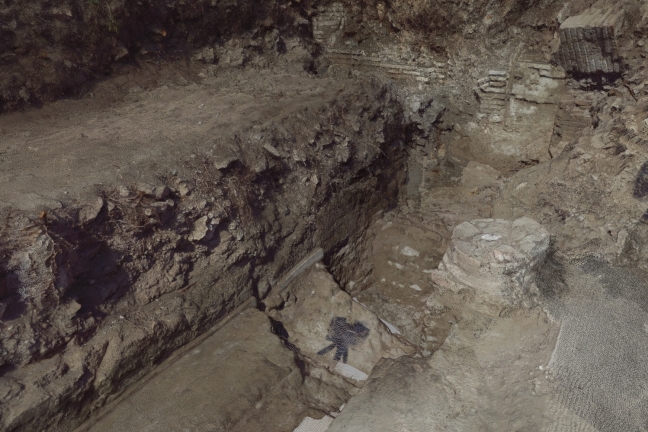 View Course
Laser scan of the excavation in progress at the Imperial Palace in 2013, showing a series of contexts in section; the laser scan allows us to view the section from any direction, helping interpretation – James Miles © University of SouthamptonFor example, if context A is abutting context B, but we know from a different part of the trench that A is older than a third context C while B is younger than the same context C, then we can safely conclude that A is older than C. This can get very complicated and it is hard to keep all these relationships in one’s head which is why we draw diagrams that show how all contexts fit together. This is what Jenny was referring to as a matrix. Only once we have investigated all of the contexts and entered them into a single matrix can we start to understand the sequence of events at the site.Each context and its content therefore need to be treated separately, and Tom outlined the procedure that we use to ensure that this is so. The recording of a new context starts from the point when it is first uncovered. It involves:Again, all this inevitably sounds simpler in theory than it is in practice. Once you start removing one context it can be difficult to see where that context stops and the next one begins. In fact most common mistakes in excavation involve either removing too little and stopping before the next context is reached, or removing too much and breaking into the next context without noticing. Either error results in mixing up finds, and the original situation is impossible to reconstruct once the damage is done.Jenny mentioned three key factors that signal a context change: colour, consistency and content. Colour and consistency are easy to understand, but not always easy to spot. For example, in the heat of the Portus summer, all exposed soil turns greyish and dusty very quickly, obscuring any changes. Noticing the change in content is even more tricky: sometimes one can recognise a change from one context to another when the types or relative proportions of components within it change (e.g. all of a sudden there is more gravel in the soil than before). On top of this other factors like ploughing, burrowing by animals, tree roots, or even the robbing of building materials by later occupants of the site can churn things up and make it complicated to understand.I somewhat cheekily asked them to interpret the contexts that they had excavated so far. This is incredibly hard and the character of a context sometimes becomes only evident once all of that data is brought together- all related contexts explored, all analysis done, all material processed. Next week, when we learn about finds, you will see the role they play in dating contexts, as we briefly discussed in week one with respect to amphorae. But also remember that this can work the other way round- finds that are not chronologically specific are assigned a date by being found in a same context with datable objects, such as coins or diagnostic ceramics.Sounds complicated? It is! But it is also very challenging and lots of fun. In the next few videos you will see the tools of the excavation trade, and also the tools for recording, such as the Total Station we referred to as a tool for planning and levelling – working out the relative heights (and often position) of finds and contexts. We will also give you a chance to see a stratigraphic matrix from the site . Next up, Kris Strutt in a rather dusty dining room!

Hi there! We hope you're enjoying our article: Excavating in contexts
This article is part of our course: Archaeology of Portus: Exploring the Lost Harbour of Ancient Rome