Now we have learned about the principles behind excavation, how do we do it in practice?
View transcript
4.5
KRISTIAN STRUTT: OK. My name’s Kristian Strutt. I work for the Department of Archaeology at the University of Southampton. I’m generally working on supervising geophysical surveys at Portus. I’m also helping out a little bit on the supervision of the excavation. And my interests really lie in the broad landscape of the Tiber delta around Portus. What we’re going to do is tell you a little bit about the excavation techniques we’re using on site here at the Imperial Palace. So the way in which we’re excavating is really to look at the site stratigraphically. Every component within the site gets its own number and index. And the numbers increment as you add different contexts to the index.
44.3
And then we try to excavate from the material that’s been dumped most recently to that that is most ancient. OK. So we’re on the first floor of the Imperial Palace here, in one of the rooms. And Peter is working in this corner of the room. When we come to excavate, the first thing we approach is topsoil and very recent, modern deposits on the surface of the site. And to excavate those, you really need to do use something that’s a bit more robust than a trowel. So we’ll be using a pick like this, and then shovelling the material like so.
77.6
Some of the finds that we’ll get from those levels we need to keep, things such as brick stamps and other things. But the deposits are modern. They’re probably quite disturbed. So there’s less of an interest in the finds from the surface than when we get down onto the underlying deposits. When we start getting down onto other features and other contexts, we tend to use a trowel, a little bit like this, and to excavate in a more refined fashion. So Peter’s troweling back at the moment on this deposit that we’ve got here. Any finds that he sees as he’s troweling back, such as a mosaic tessera or coins or other brick stamps, pieces of pottery, et cetera, he’ll actually keep.
121.9
He will label those associated with the number of the context that he’s excavating, and they’ll be then sent on to be processed as finds. The kind of things that we’re excavating on the site include deposits such as this one that Peter’s working on, and features that have been cut into material, such as this feature here. This is a cut that’s later than the material that Peter’s working on. And this originally was filled with a later deposit of material that has its own context number. In addition to that, components such as masonry and walls will have their own context numbers. So you can see here, this number here, 11,277, relates to this wall here.
165.4
And this number here, 11,223, relates to this wall here. So every component on the excavation has its own number. Well, I hope that’s made some of the excavation process and the methods that we use a little bit clearer. You can go on and find out a little bit more about what’s going on elsewhere at Portus.

Kris work’s for Archaeological Prospection Services of Southampton and also as a researcher and educator in the archaeology department. You will note that this video is very important in featuring one of Peter’s cameos! There are others to spot. 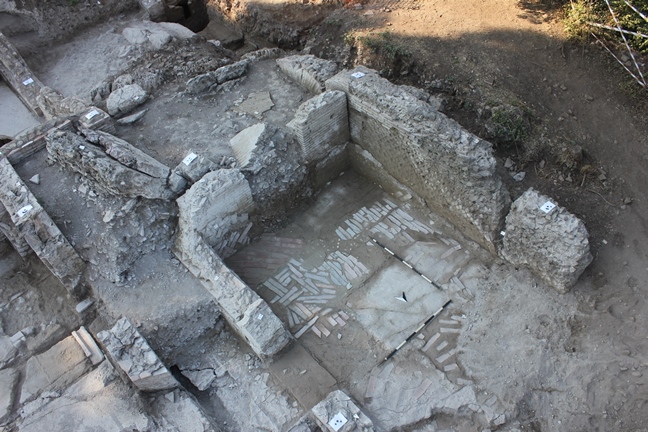 An aerial view of the room Kris is standing in, later in the season – Simon Keay © University of SouthamptonThe trowel is of course the key tool of the archaeologist. Peter is “trowelling back” which means carefully removing a thin layer of soil, whilst watching out for changes in consistency and colour. As we have learned from Dragana these changes indicate new contexts. 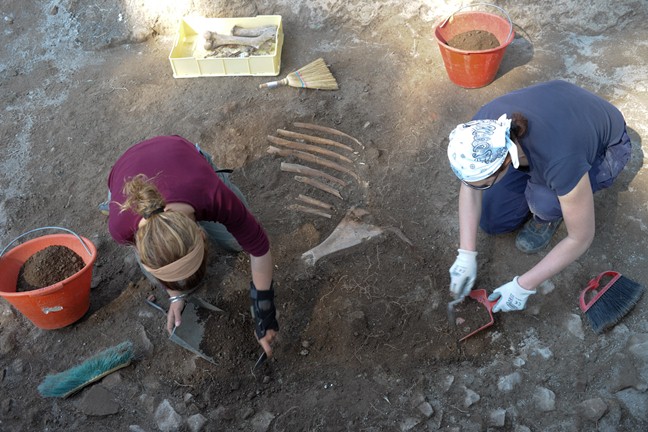 Excavating the bones of a young cow – Hembo Pagi © University of SouthamptonPeter will therefore try to “clean back” the soil layer until an interface is reached, perhaps indicating a previous floor level or the edge of a pit. Using a trowel is as much about touch and sound as about sight – with the trowel moving differently in the soil and bumping off stones and other material. The final sense, taste, is also used. 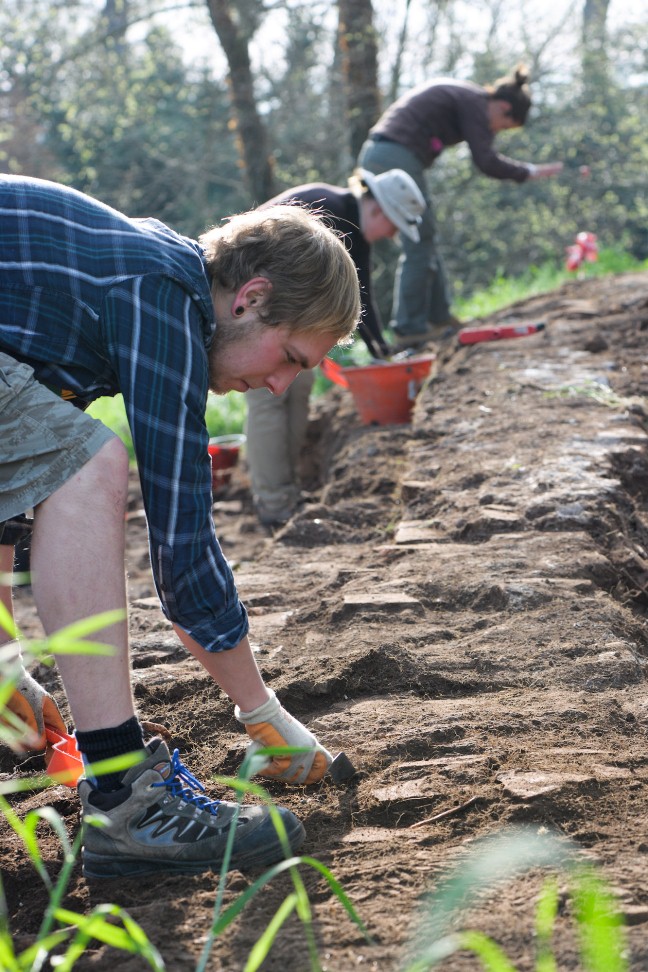 Carefully cleaning back a Roman wall – Hembo Pagi © University of SouthamptonDon’t try this at home but experts in soils quite often put a small amount in their mouth to get a sense of the particle size and other aspects. 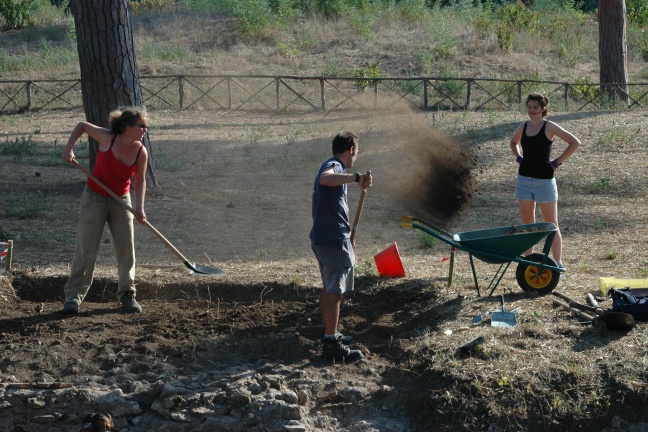 Excavation can be a rather dirty and dusty activity! – Hembo Pagi © University of SouthamptonYou will learn more about the surveying aspects such as total stations in the next activity.

Hi there! We hope you're enjoying our article: The excavation process
This article is part of our course: Archaeology of Portus: Exploring the Lost Harbour of Ancient Rome