What is the massive building to the east of the Palazzo Imperiale?
View transcript
4.7
MEAGHAN CARLEY: So I’m here with Simon, director of the project. So, Simon, where are we?
9.4
SIMON KEAY: Well, we’re on flat land, which lies to the east of the Palazzo Imperiale, which you can see straight ahead of you, and is bounded on one side, to the south, by the great Trajanic hexagonal basin, and to the north, by the great Claudian basin.
27.2
MEAGHAN CARLEY: So what’s this building behind us?
29.3
SIMON KEAY: Well, now this is a very special building. It is getting on for a quarter of a kilometre in length, about 246 metres. It’s about 11 metres wide. And it opens directly onto the Trajanic basin in front of you. And it also opens onto the Claudian basin behind. In terms of the building itself, what you see today is really a palimpsest of structures. So, the building itself was originally constructed under the emperor Trajan. It was then enlarged in the course of the later 2nd century, and then was used almost continuously through into the Late Antique period, probably sometime in the 5th or probably even the 6th century A.D. In terms of the Trajanic period, the building was absolutely massive.
85.2
In addition to being a quarter of a kilometre in length, it consisted of three separate building sections. And we call this building 5. And the building sections are called building 5-1, 5-2, and 5-3. Now, each of these building sections comprised three narrow bays, which were only 11 metres wide, and two passages, which are only 4.5 metres wide, and the wide bay, which is 20 metres wide. And what you have in front of you is the Trajanic phase of one of the narrow bays. So what you see in front of you here is 11.5 metres wide. From where my colleagues down at the front are, right to the back is getting on for 50 metres long.
136.6
And to understand the scale, you have to realise that the big piers you see, those brick piers, one there, and another there, those are 11 metres wide and they are the bottom of two uprights which supported an arch which would have stood to 18 metres in height. So to get a sense of the building, you have to imagine that there are a whole series of these arches looking out onto the Trajanic basin. We also have arches looking onto the Claudian basin, but these are half-shut. So the building is opening onto the Trajanic basin, and it’s through those openings that the activity that happened in them was played out.

There was a lot of detail in the video so here is a quick summary. It was filmed with Simon and Meaghan standing between the Trajanic basin and the Claudian basin with the Palazzo Imperiale to the west. Building 5 was created in the Trajanic period, and extensively modified later in the later 2nd c. AD and continued in use into the later 5th or 6th c. AD. It is c. 240 m long and c. 60 m wide. The building is composed of brick-faced concrete piers with a series of brick arches that define a series of parallel north-south bays, that open on to the Claudian to the Trajanic basins. Some of these bays (Narrow Bays – NB on the plan below) are c. 11m wide, while others are c. 19m wide (Wide Bays – WB below) with intervening passages c. 4.50m wide (Passage – P below). The arched openings were subsequently filled in with brick- and reticulate-faced walls in the later 2nd c. AD. 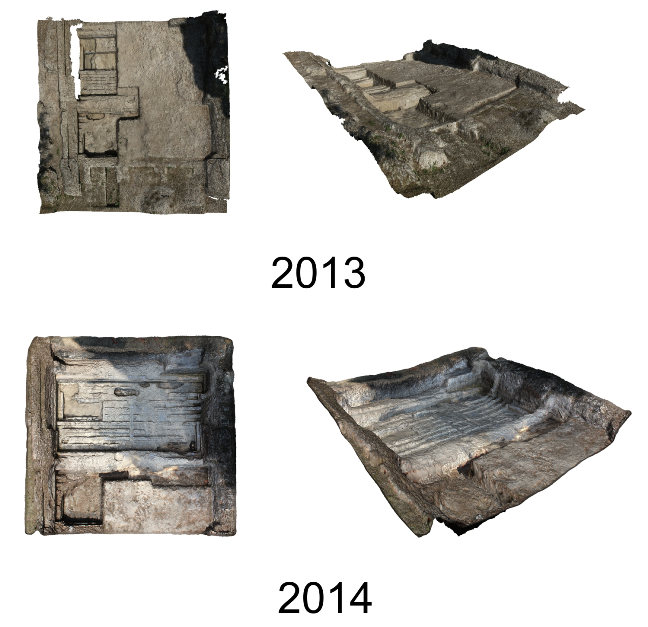 Comparison of the excavation of Bay 5.2 (see plan below) of the Navalia in 2013 and 2014, based on photogrammetry gathered via an aerial drone – James Miles © University of Southampton The original function of Building 5 is uncertain, but it was probably commissioned for the repair or construction of ships, since its layout closely resembles that of Classical, and particularly, post-Medieval ship buildings. For this reason it is often refered to as the navalia (shipyard) – but we will think more about this later. In the later 2nd .c AD, at least one of the large bays was converted into numerous rooms that were used for storage of goods of different kinds. Simon said it was a “palimpsest of structures” – a palimpsest refers to a written document where it has been partly erased and over-written. It is often used in architectural history to refer to multiple transformations of buildings. Similar transformations of structures can be seen in Ostia in buildings like the Grandi Horea that was constructed under Claudius, but with additional reconstructions under Commodus and then Septimius Severus. Next you will read an article that provides some of the evidence for the shipbuilding activity – a large collection of nails, and some other metal artefacts. 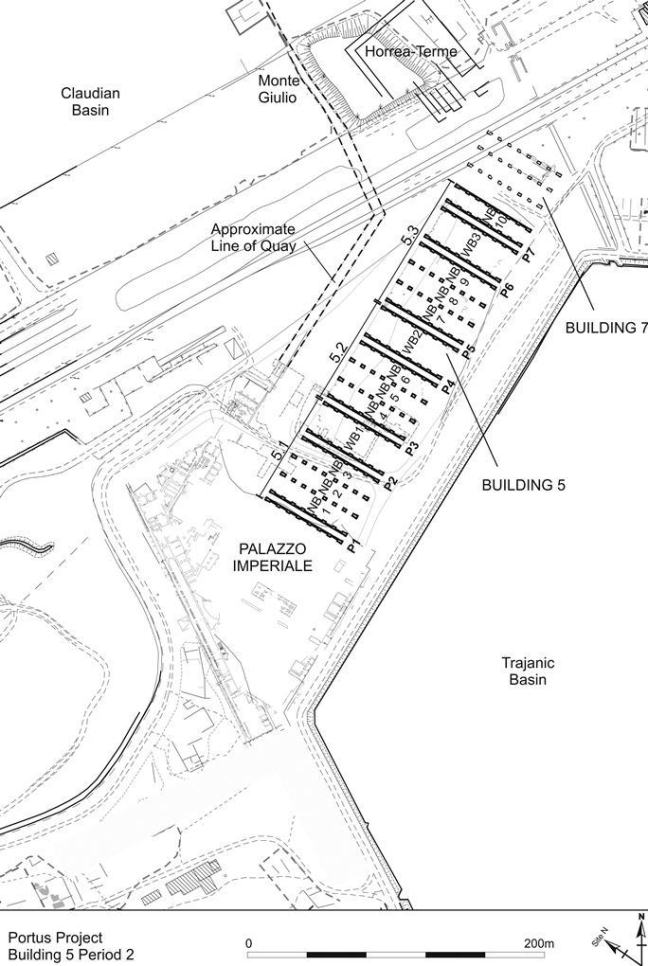