What are the kinds of Roman coins we find here?
View transcript
4.9
HOLLY WALKER: You said that brick stamps, you can get lots of information. These coins, what can you actually tell? I mean, some of them still have traces of heads on them. But if they don’t have a face on them, what else can use to date them?
18.1
SIMON KEAY: Ah, then you’re in trouble. Well, actually it’s not as– I say that just trying to be funny. But actually it’s not as impossible as that. Because when you– Roman coins are– at any period in time were– the coins that you find were denominations within quite a well-regulated monetary system. And what we know is that they comprise gold coins, silver coins, bronze coins. Now we’re digging in levels of, as you know, about the sixth, fifth, fourth century AD. By that stage, gold coins were very, very rare. They’re very rare to find in archaeological sites. Silver coins are still pretty rare. You can find them– silver siliqua, as they’re called.
78.5
But the most frequent coins you find are copper and bronze. And indeed, all the ones we’ve found are copper and bronze. And you can actually tell quite a lot about the chronology of them or the dating of them from those heads and the lettering you see on them.
100.1
Because even though there were many, many different varieties, say in the fourth century, many different varieties of coins coming from the mint at Rome or even briefly at Ostia, but mints all over the Mediterranean basin, you can actually look closely and you can actually see enough of the image of the emperor or the reverse of the coin or indeed of the lettering to date that coin probably sometimes within five years or within 10 or 15 years. But remember that the coins are found in– when they’re found in a layer, that gives you a terminus post quem, again, so the layer isn’t dated by the year of the coin or of five years of the coin.
151.2
It’s dated to the time after which the coin was issued because it could have circulated for a long time before somebody dropped it. And these ones, you see. You can see quite carefully, if we take one of these out. There are two kinds of coin that we’re finding here. This one, you can see quite a clear head just there. And you can see the writing around the outside. It may look a bit difficult for you to see. But I’m familiar with these enough to know that this is a coin of a fourth century emperor, probably I would say, the Emperor Constantine or one of his family. And that dates it to probably some time in the 320-330’s AD.
207.3
So if we found just this in a layer, you could say that that layer dates to some time after the 320-330’s.

We have found a lot of coins at Portus. Next week you will learn about how we can photograph these coins in ways that make them easier to identify, using clever digital methods like Reflectance Transformation Imaging (RTI). For now you can see a static image of the specific coin that Simon was discussing. 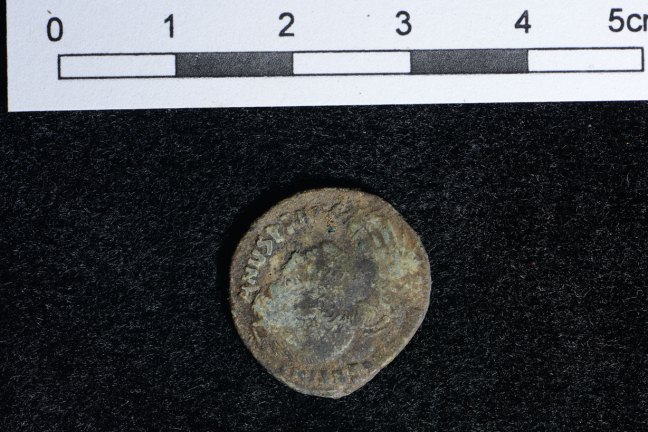 Bronze Constantinian Coin – Hembo Pagi © University of Southampton I mentioned Brick Stamps at the start of this video since of course coins provide only one of a range of stamped objects that we find. Other ones include coins and amphora stamps, which we learned about in week one. Coins were produced in the Roman period using a metal die that was struck into a hot coin blank. Simon referred to silver siliqua. These were silver coins used in the time period covered by this week of the course – specifically the fourth and fifth centuries AD. Coins first emerge amongst the Greek communities of Asia Minor in the 7th c. BC, followed by communities of mainland Greece and different parts of the eastern and central Mediterranean. Roman coins appeared later, in the 4th c. BC, soon proliferating across the Mediterranean in the wake of Roman conquests. While coins may have originated as tokens of some kind, they soon came to be used for the exchange of goods. Roman coins were part of a well-defined monetary system that underwent a number of major reforms during the 3rd and 1st c. BC and again during the 2nd, 3rd and 4th c. AD. For example, in 4th and 5th c. AD mint marks on the coins can help us understand networks of connections between the places where the coins are found and the mints that issued them. Also, counting up the changing numbers of coins found at a site through time can give us clues about the circulation of coinage and, arguably, the commercial fortunes of the site. They are of course also useful for dating archaeological layers.

View Course
In an age without newspapers or radio, Roman coinage also had an important propaganda function. The images and accompanying lettering informed users of the coinage who was Emperor, his Imperial powers and relationship to previous emperors, military victories and other Imperial achievements and relationship to the gods. Occasionally they portrayed Imperial buildings, or even more occasionally an entire harbour, as in the case of the famous Portus issues of Nero and Trajan. For example, Portus is represented on a coin from the time of Nero (AD 64) where it is described as Portus Ostiensis or Portus Augusti. This coin is a brass sestertius dated to AD 64 that bears the name AUGUSTI S POR OST C which can be expanded to mean, approximately: “The Ostian Port of the Emperor. By Decree of the Senate and People of Rome”. Portus is referred to by a variety of Latin names including Portus Ostiensis, Portus Augusti, Portus Urbis Romae, Portus Ostiensis, Portus Ostiae, Portus Traiani, Portus Augusti et Traiani and Portus Traiani Felicis. You can also see a representation of the Trajanic Basin on a coin from his reign, with the impressive frontage of massive buildings clearly apparent. There are lots of different ways that coins like the one Simon showed us might have got into the archaeological record. They might simply have been lost – dropped in the course of a normal day working at the port. Or they may have been deliberately hidden, as in the case of a hoard of coins we discovered in the Palazzo Imperiale. Or the coin might even have been thrown away in a ritual way, just like we throw coins in a wishing well or the Trevi Fountain in Rome It is amazing that coins like the one you saw can be dated sometimes to within a few years, and hence they can help date the context where it is found, via a terminus post quem. As all good archaeologists, you know what that means 🙂