Photogrammetry and laser scanning of artefacts

What is photogrammetry?
View transcript
5.1
JENNY ARDAGH: So what’s photogrammetry then?
7.6
HEMBO PAGI: Photogrammetry is another technique, which is based on photographs. It’s a quite old technique already, from mid 19th century. But nowadays, digital photogrammetry is used mainly for either taking measurements or, what we do here is, to reconstruct a 3D surface from two-dimensional photographs. So basically, again, as with RPI, we take a series of photographs. But now we move the camera around. In RPI, the camera is stable and also, our object is at the same location. So nothing else moves the light. But in photogrammetry, we move all around to get 60% to 70% of overlap off each photograph.
65.1
And this enables us– or the computer– to find the common points and then work out the actual location, where was the camera and where the particular points on the real space are.
84.4
JENNY ARDAGH: OK. So we’ve done a bit of laser scanning. How does that compare to laser scanning?
90.4
HEMBO PAGI: Output is very same, if we see the points in a space. So this is very similar. But the process– how we get there– is very different. As I said, yeah, here it’s all based on photographs. So we take a series of photographs and then the computer does its work and we end up with a point cloud. In laser scanning, the measurement is done, and we get the point location right away.
121.8
JENNY ARDAGH: OK. Thank you very much. That was very interesting.
124.1
HEMBO PAGI: You’re welcome.

Hopefully this section has reminded you of James’ video about laser scanning last week and the discussion of landscape photogrammetry in week three? These techniques are applicable at multiple scales and the resulting data can be combined to give fabulous records of finds, buildings and landscapes, or indeed all three together. For example, we have undertaken laser scanning of a range of finds at Portus and brought them together in simulations of buildings that have also been laser scanned. Increasingly data captured through different methods are being brought together to help us to record and visualise the surface and even the interior of archaeological objects, place them in digital environments that mimic the real world and allow us to “see them again”, or at least gain a different perspective. You can learn more about how the RTI technique fits into this collage of methods in the next step. Photogrammetry involves the creation of a 3D image or model by extracting depth and distance information from photographs. This requires a set of images of the same subject, each taken from a different location so the pixels can be matched in the software. The PhotoScan software we use processes all the photos to create a 3D mesh with surface textures derived from the photo colours. During the first run of the course James provided this additional information:

To process the triangulation scans we use an open source software known as Meshlab. This is a great tool and provides all the necessary functions required to edit, stitch, remesh and analyse the models produced – MeshLab link We originally used the scanner’s specific software to process and stitch the models together but since my involvement we have moved over to meshlab as it has better algorithms and features.

For photogrammetry we use AgiSoft Photoscan. We were one of the first to use this software in Cultural Heritage and it is now used by most departments and archaeology units over the world due to the level of control given to the user within the production of the models. The company recently developed a new version of the software which allows for a greater comparison with laser scan models, often providing greater resolution. Hembo has a blog post on this which explains it in more detail. 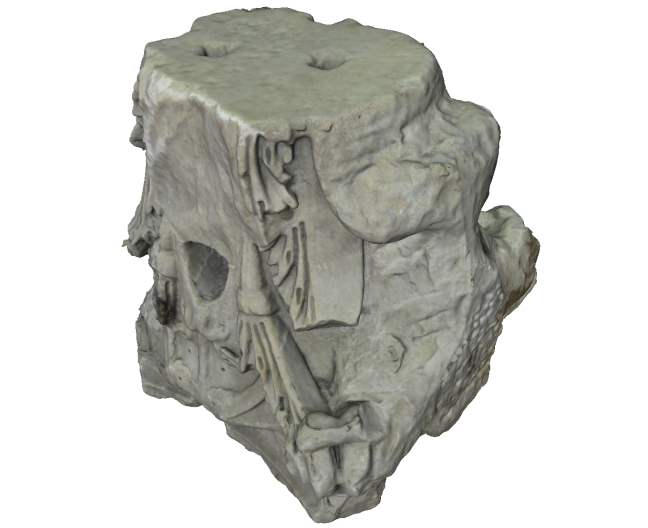 Photogrammetric model of the Corinthian marble capital – James Miles © University of Southampton The key thing to understand is that RTI and photogrammetry are trying to do the same – use a series of two-dimensional photographs to record a three-dimensional object. RTI is particularly good at recording surfaces with subtle low relief i.e. very small surface changes. Photogrammetry can do this too but is particularly suited to more three-dimensional objects, like the capital below. The other key thing to understand is that RTI does this by keeping the camera in a fixed position and moving lights so that different shadows are cast across the object. Photogrammetry moves the camera rather than a light source and finds matching points between images. From this it works out the position of the cameras and in turn the shape of the object being photographed.

View Course
As Hembo noted photogrammetry and laser scanning can both produce the point clouds that you saw in James’ video last week. They can also be used to produce digital surfaces which in turn can have textures applied to them in order to simulate or represent the surfaces of the object recorded. So, we can scan the eye of the portus head and digitally texture it first to show the marble from which it is made, and then perhaps add a virtual layer of paint to simulate how it may once have looked. By doing this very carefully we can draw conclusions that are similar to those that would be possible if we had physically taken out a paintbrush and added Roman pigments to the real head. But by doing it digitally we do not damage the artefact and we can try an infinite number of permutations. When Hembo referred to direct acquisition he meant that the laser scanner directly measures each of the millions of points (and the colour) across the surface of an object. Photogrammetry uses software to analyse photographs in order to produce the same data. As Hembo also said, the photogrammetric technique has been available to archaeologists for generations, but recent innovations in digital photography, computer hardware, and computer vision have improved the speed and quality of the results. At a large scale, this method allows our team to produce comprehensive images of walls and floors belonging to particularly complex multi-phase buildings by means of a small number of photographs: hand-drawn plans of these structures would take far longer. In particular, we have concentrated on high-resolution photogrammetry that not only generates visual representations, but also metrically-accurate survey records. The results of this approach can be comparable to – or even better than – data gathered using a non-contact digitizer, such as a laser scanner. We also use a gigapan camera system to create photogrammetric data at Portus. 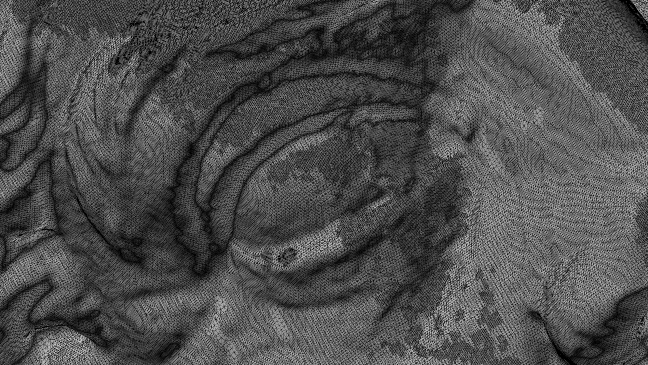