The previous step emphasised the benefits of learners reading code. At the end of her blog post, Exploring pedagogies for teaching programming in school, Sue Sentance describes how she changed Use-Modify-Create to encourage learners to read code and to explain their thinking as they investigate that code.

Sentance expanded Use to become Predict-Run-Investigate, Modify remained as it was, and Create became Make:

Sue Sentance and Jane Waite shared their findings from their work with secondary students and then worked with primary teachers to use the approach with younger learners. They emphasise the importance of reading code in order to write code. Use-Modify-Create develops fluency in coding by the learner seeing a rich variety of possibilities within a programming language. This followed the parallel of learners reading a rich variety of texts to become mature writers.

The following example of PRIMM is planned to reinforce your understanding of selection and to consider the possibilities it enables. Review the process below and think about what it adds to Use-Modify-Create.

Predict: Read the code for this keepy-uppy tennis game.

This is the code for the tennis racket.

Predict what this does. How does it control the movements of the tennis racket? What movements can the racket make?

This is the code for the tennis ball. 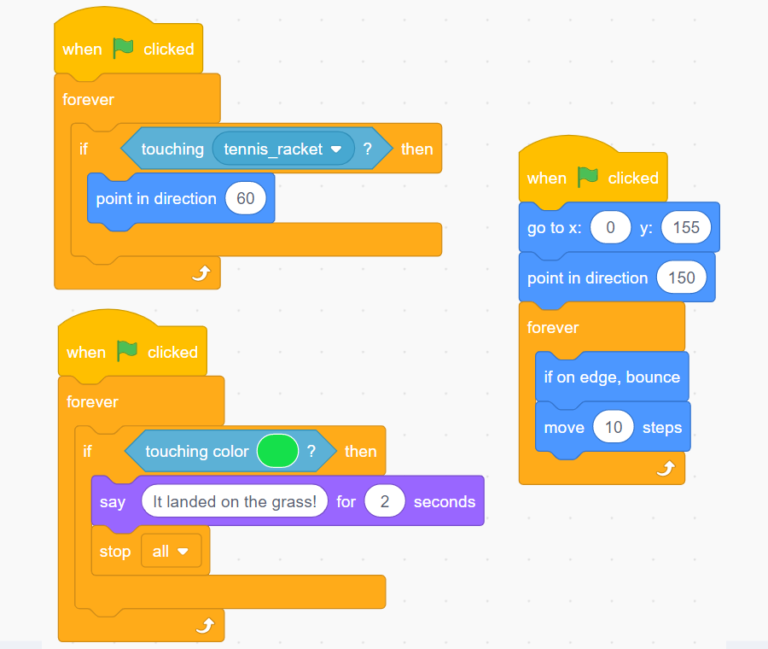 Predict what you think each sequence will make happen. Each sequence demonstrates a different use of selection.

Run: Click on the green flag to run the keepy-uppy tennis game. Running the project will show whether a learner has read and understood the code. The tennis racket is set to move with the mouse pointer. It will move only along the x axis. See inside the project to check your understanding of the code. You will need to click on both sprites: the tennis racket and the tennis ball. If you are uncertain of what a sequence of code will do, you can scroll down in the script area to see comments that explain the sequences.

Investigate: Investigate changing the numbers for the direction and the amount of movement. What difference does this make to the game?

Modify: What modifications would you make to improve the game? This could be changing the numbers in any of the blocks you have investigated, or editing the message at the end of the game.

Make: Imagine a game of your own based on keeping things up in the air. This could be tossing pancakes, or keeping a plane or a kite flying.

Think about how PRIMM helped to increase your understanding of selection. Share examples of your modified games and discuss the changes you made.

What is the difference between Use-Modify-Create and PRIMM? What does PRIMM add to the learning experience? Add your thoughts in the comments section.