You might have used and created simple functions that carry out one task in isolation. This type of function is often referred to as a procedure or subroutine. These functions might accept parameters, but they do not return any information to the program that called them.

In this article, you’ll learn more about these two aspects of functions – parameters and return values – and how they make functions incredibly useful.

Let’s imagine our function as a machine carrying out a some computational task when switched on or called. A simple function or procedure is like a basic machine: it does one fixed task, like a kettle. We turn it on, it does the task, and we recieve no real feedback from the machine. Every time this function is called it carries out its task.

Most everyday machines allow us some control over what the machine does: the temperature of an oven, the speed of a fan, or the amount of water a washing machine should use. Without these controllable elements we’d need a different machine with a different setting for every job, e.g. a different oven for each temperature we want to cook at.

It’s a similar story with programming. Whilst simple functions allow a programmer to package up code and reuse it, without controllable elements they would need a different function for every scenario, even if they are very similar.

Rather than re-invent the wheel every time, a programmer will create a function that can apply to multiple situations and be tailored to each one, using inputs or parameters.

For example, here’s a pair of functions that each load some map data from a file. As you can see, they have very similar actions: they each open a text file in r (read) mode, and add the contents of the file to a list.

Such duplication in programs can be avoided by writing a single function with parameters, which can then be used to load either map data file. Here the parameters have been given descriptive names (file and map), but you can call them anything you like. The names don’t need to relate to anything in the rest of the program: they only exist within the scope of this function.

This function can then be called, and will use whichever map file and variable you ask for:

A real life machine, like the functions we have seen, has consequences or side effects: it washes clothes, cooks food, or boils water, for example. However, unlike the functions we’ve seen so far, it may also provide some feedback or information as output. Machines might beep, display some text, or sound an alarm, for example. A function can also provide information, simply by returning some data to the program that called it.

Once defined, a function like isWeekday, which returns a True or False (Boolean) value, can be used in conditional statements:

Of course, functions aren’t just limited to returning Boolean values. They can return any variable, list, or other object. For example, the following function asks the user to input some numbers, and then returns the same numbers as a list.

You can even return several values from one function and then store these in separate variables:

In this example, we have used different variable names when calling the function from the variable names inside the function. Whilst this is good practice as it helps the programmer distinguish between them, it is not actually necessary in Python. In other words, we could have called the function like this:

Variables defined inside a function, like firstname, exist in isolation from other variables and only whilst the function is run. This is their scope. Variables defined in the main program, rather than within functions, exist for the duration of the program and are said to be global in scope. If you want a function to have access to variables outside its own scope, best practice would be to add them as parameters to the function:

Once you’ve got to grips with creating your own functions, you can begin to add more structure to your programs, taking each component of the program and creating a reusable function from it.

For example, imagine you wanted to create a program that could send Morse code messages by blinking a single LED. This problem can be broken down into a hierarchy of functions. 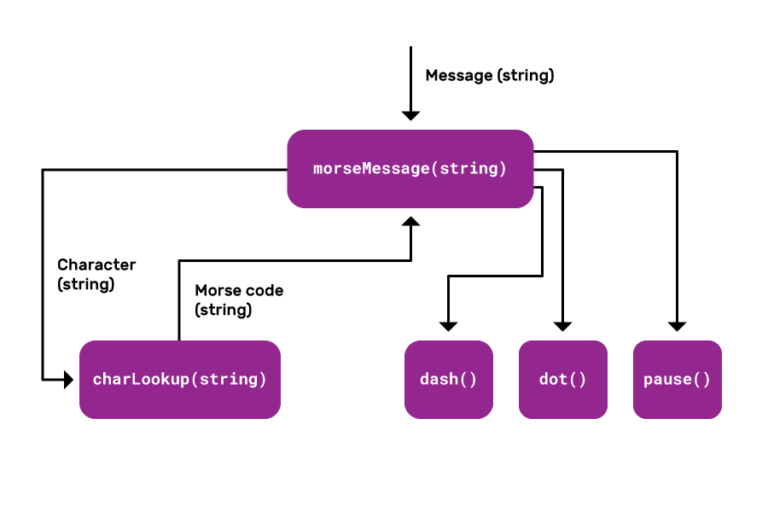 An example of the full code for a Morse code generator can be found here.

Can you create your own functions that use parameters and return values? Pick one of these challenges to complete.