What is an Algorithm?

Watch James Robinson introduce the concept of algorithms, and explain how they are related to programs and why they are so important.
View transcript
3.2
Hello, and welcome to week two of the course. Last week, you looked at the use of functions and how you could use them to build reusable chunks of code. You also looked at how to include inputs and outputs in your functions as parameters and return values. This week, you’re going to learn what programmers mean by the term “algorithm” and how they relate to the programs we write. You’ll also have the chance to extend your Python skills to create and manipulate lists. You’ll use these new skills to convert algorithms from plain English into programs. So what is an algorithm? An algorithm can simply be defined as a set of instructions that precisely describes an activity.
46.8
Algorithms are used everyday, all around us, to do all sorts of tasks, from finding a route from A to B, searching the internet for the most appropriate pages, or even just recommending movies based on your past viewing. To be called an algorithm, rather than just a set of instructions, it must be sufficiently precise and unambiguous, leaving nothing to interpretation. An algorithm must be repeatable, producing predictable outcomes based upon the same inputs. We can represent algorithms in a range of forms, including natural language, pseudocode, flow charts, or symbols. The terms “algorithm” and “program” are often confused. Whilst the two are related, they have different meanings.
94.4
An algorithm describes how to complete a specific task for any actor to carry out, either a human or computer. A program is the same algorithm but implemented for a specific computer to carry out, written in a language which is understood by that computer. For example, a square-drawing algorithm could be implemented as programs it either Scratch the Turtle model in Python or even using a floor robot, like this one.
125.2
One of the really interesting aspects of algorithms is that, for any given problem, there are numerous solutions. Whether they be simple, elegant, speedy, or inefficient, they are all valid, as long as they produce the desired outputs. In a group of learners, it’s therefore entirely possible to get a different but correct algorithm from each of them. Students like to be correct. And so acknowledging the validity of their solution is important. Depending on where they are used, the performance of an algorithm can have a significant impact. And it can be compared in different ways. A route-finding algorithm for a sat nav needs to find a suitable route quickly. Therefore, speed is important.
166.7
Algorithms that govern the behaviour of a self-driving car also need to respond quickly to changing situations. However, they are also making life and death decisions and so need to be robust and tested. Every time you search the internet, an algorithm is used to rank the most relevant pages for that search. The user cares about both the speed and the accuracy of the search results. Algorithms are indeed everywhere. And we have already solved many problems using them. However, there is still work to be done. As a society, we are finding new problems in science, medicine, arts, politics, and artificial intelligence– all needing new algorithms that are yet to be invented. Now, it’s your turn.
211.5
Write a simple algorithm to draw a 2D shape, like a pentagon or a star. Share it in the comments and see if you can work out, from other learners’ algorithms, what the shape was. Good luck.

Programmers use functions to build reusable chunks of code and manage complexity. In this article, we will discuss what programmers mean by the term algorithm, and how algorithms relate to the programs we write. There will be an opportunity to write some plain English algorithms, and then use your list skills to turn these algorithms into programs. You’ll also extend your Python skills by learning to create and manipulate lists.

One of the challenges associated with learning (and teaching) computer science is the additional vocabulary it introduces, either complex terms for simple enough ideas (algorithm, decomposition, abstraction), or terms that have specific meanings in other areas of learning (‘variable’ means something subtly different in maths, science and computer science). Whilst it is important that learners understand terminology, more important is their grasp of the concept or idea in question. An algorithm can simply be defined like this: Algorithms are used every day all around us to do all sorts of things, such as finding a route from A to B, searching the internet for the most appropriate pages, or recommending movies based on your past viewing. Whilst we could substitute the words instructions for algorithm, there are some important characteristics of algorithms that make them distinct. An algorithm: 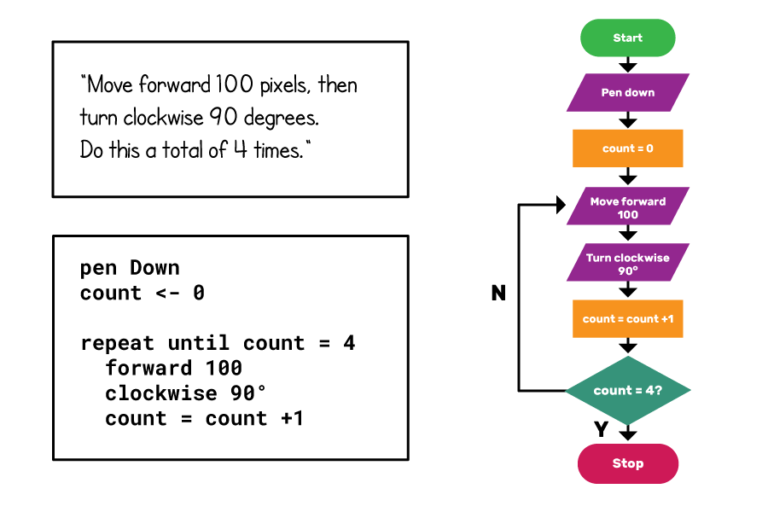 The term algorithm is often confused with program. Whilst the two are related, they have different meanings. An algorithm describes how to complete a specific task for any actor to carry out, whereas a program is the same algorithm implemented for a computer to carry out and written following the rules of a given programming language.

View Course
For example, the square-drawing algorithm below could be implemented using the pen tool in Scratch, the turtle module in Python, or even by a floor robot.

One of the really interesting aspects of algorithms is that, for any given problem, there are numerous solutions. Whether they be simple, elegant, speedy, or inefficient, they are all valid, as long as they produce the desired outputs. In a group of learners, it’s entirely possible to get a different, but correct, algorithm created by each of them. At this point, it’s important to acknowledge their correctness, but also to encourage conversations and compare the merits of each approach. It’s this higher-order thinking that programmers need, in order to evaluate the ‘best’ approach whilst being aware of alternatives.

Why are algorithms so important?

Depending on where they are used, the performance of your algorithm can have a significant impact on how useful it is. Different aspects of algorithm performance are important in different cases:

Algorithms are everywhere, as we’ve seen, but that doesn’t mean that they are fully understood. Far from it! Whilst there are many problems which have been solved using algorithms and plenty of ‘standard’ algorithms, there is still work to be done. As a society we’re finding new problems we can solve with algorithms in science, medicine, arts, politics, and AI. New algorithms are constantly being invented and existing ones improved. To keep doing that, the world needs more computer scientists.