Learn about the challenge that food poisoning posed to public health in post-war Britain.
© London School of Hygiene & Tropical Medicine
Despite the broad shift over the course of the twentieth century away from communicable disease towards chronic conditions, infectious disease continued to pose problems. One of the most common was bacterial infection as a result of eating contaminated food. In this Step, Anne Hardy and I consider the history of food poisoning and the response by public health authorities.

A brief history of food poisoning before 1945

Although the association of food with poisoning goes back at least as far as antiquity, when meat, milk and shellfish had all become recognised as being occasionally responsible for outbreaks of food poisoning, it was only in 1888 that such episodes were linked to ingestion of pathogenic bacteria. The German pathologist August Gaertner isolated a bacterium from both the meat of an emergency-slaughtered cow, and from the intestines of a man who died from eating her meat. In the 1890s this bacillus was found to be related to typhoid and to several other diseases identified in animals and some were shown also to cause disease in humans.This group of related bacteria were given the family name of Salmonella after the American bacteriologist Daniel Salmon who had isolated the first of the family in the mid-1880s. Beginning around 1900, and especially after 1920, the identification and study of these organisms and related outbreaks of human disease became the pre-occupation of a global scientific community, while a consciousness of food poisoning began to entrench itself among public health authorities. By 1945, Salmonella food poisoning had become recognised as a global public health problem and one compounded by the new practices of intensive farming of poultry and cattle.1

Public health authorities responded to the threat of food poisoning in two ways. The first involved the inspection of farms and food production sites, such as slaughterhouses. Up until 1974, this was the responsibility of the Medical Officer of Health (MOH). Attempts were also made to reach consumers and encourage them to store and prepare food correctly. Efforts to ensure good food hygiene were a key aspect of MOsH work in the 1950s and early 1960s. Most homes did not have a refrigerator, so fresh food could only be stored for a short period before it would spoil.At the same time, food hygiene campaigns could tap in to more deep-seated fears. Flies, for instance, had long been thought to pose a public health danger. Whilst it was true that flies could spread disease, the fly was symbolic of wider fears about dirt and its connection to disease which had not entirely gone away even in the post-bacteriological revolution era.2 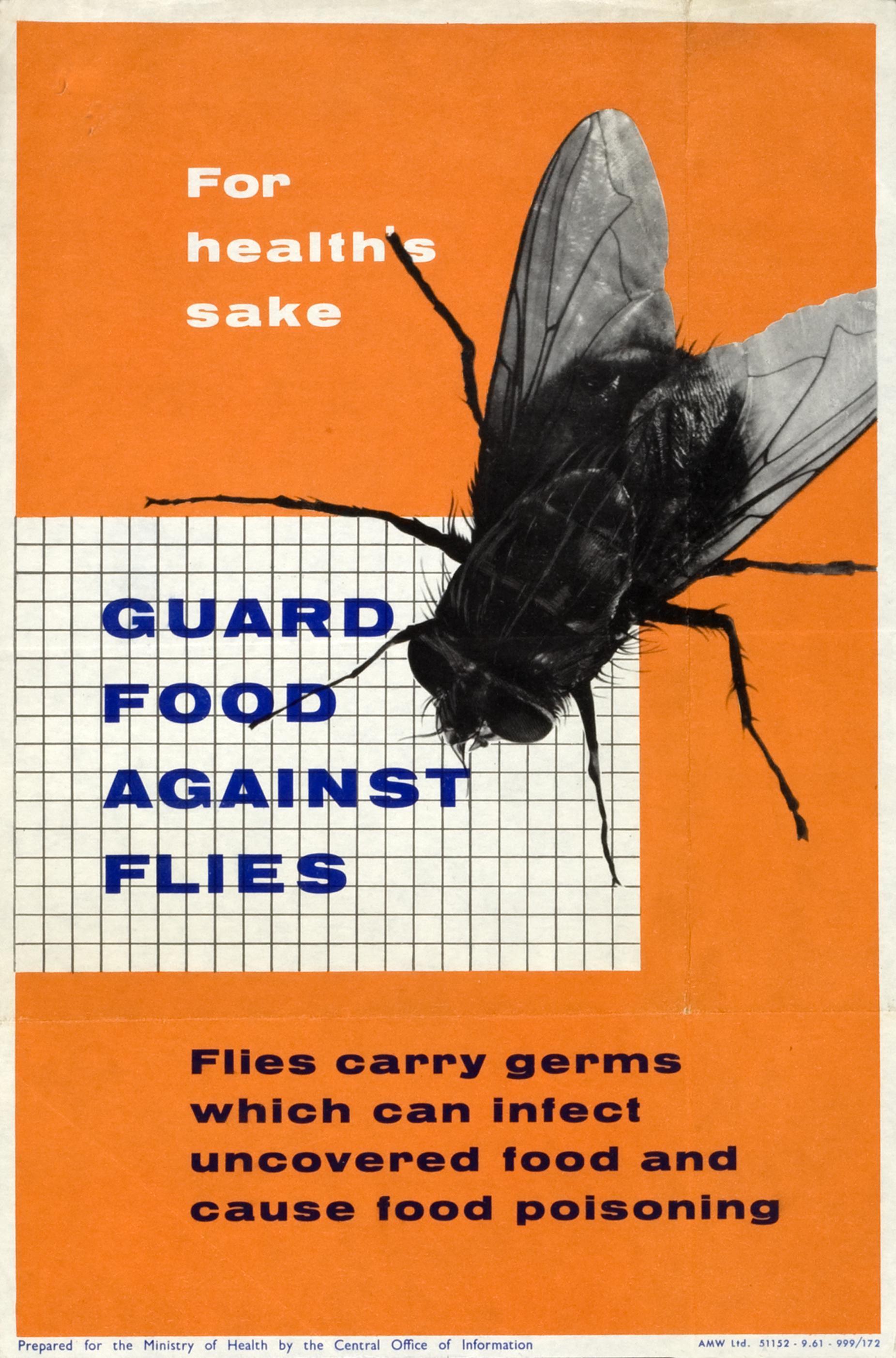 View Course
Food hygiene campaigns could also reveal more current issues. Take this poster from the mid 1960s. It was designed to encourage people to wash their hands before eating (although one might wonder where they were supposed to do this on a trip to the beach!) but in its depiction of a white, nuclear family, the poster was emphasising a specific image of the family. The 1960s was a period of rapid social change, and some people felt that this traditional model of the family was coming under threat. Fears about food poisoning could be a way of voicing other concerns too. 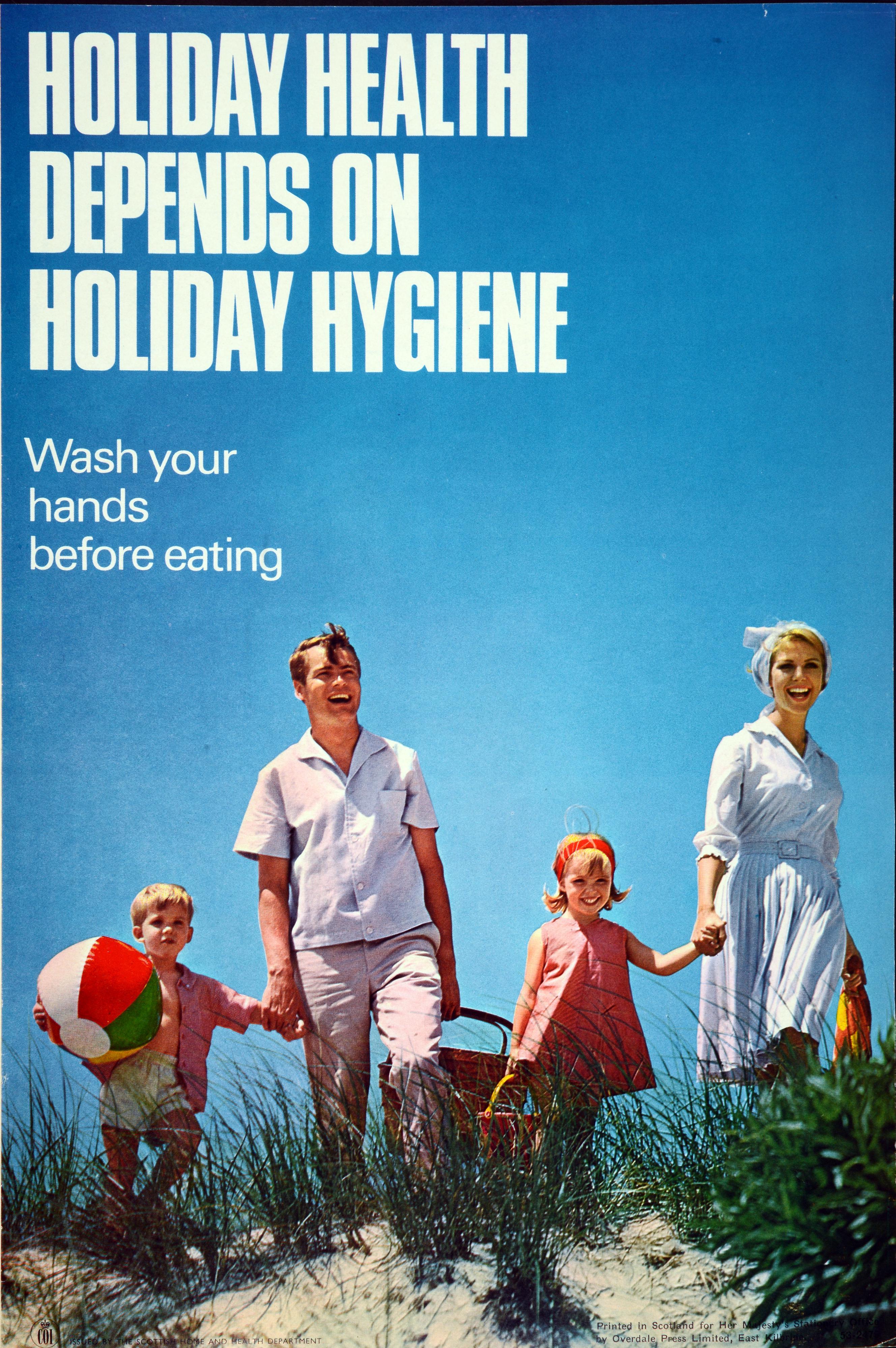 Targeting individuals and families to improve their standards of food hygiene could only go so far in combating food poisoning. Intensive farming and the introduction of antibiotics to control infections in populations of cattle, pigs and poultry led, inevitably, to the emergence of antibiotic resistance among Salmonella bacteria. It was 1988 before a multi-drug resistant strain of Salmonella typhimurium DT104 emerged among cattle in England and Wales, and soon passed on to poultry, pigs and sheep. By the 1990s it was becoming a serious problem for global public health.In the meantime, it had become apparent that much frozen poultry in Britain was infected with salmonella of various types, and so, increasingly, were eggs and egg products. In 1988, Salmonella enteritidis PT4, which was linked to eggs, overtook Salmonella typhimurium as the main cause of human salmonellosis. By now the British public health authorities were thoroughly alarmed. It was in this context that the junior minister for health, Edwina Currie, on 3 December 1988, unguardedly announced on Independent Television News that most of the country’s egg production was infected with Salmonella.The resulting food scare was perhaps the largest and most damaging to have occurred in British history, but it did little in the long run to discourage the country’s consumption of eggs and poultry, or, indeed, to reduce the risks associated with the consumption of imported poultry and eggs. Since the 1980s, salmonella has not, however, been the main cause of food poisoning in Britain, although it is in individual cases a greater danger to its victims than other common food poisoning agents. Since 1981, the annual toll of cases of poisoning by campylobacter has far outstripped that of salmonella, estimated to cause nearly 500,000 cases a year as against some 10,000 for salmonella.3Yet whatever the specific agent in any individual case of food poisoning, its very occurrence indicates a significant failure in human or animal hygiene at some point in the chain of food production. Beyond this, the public health response to food poisoning can also shed light on a wider set of fears about infection and deeper social, economic and technological change.
© London School of Hygiene & Tropical Medicine

Hi there! We hope you're enjoying our article: Food hygiene
This article is part of our course: A History of Public Health in Post-War Britain