A grounding in American History

Where did modern America come from? Watch Dr Kit Candlin to learn more.
View transcript
4
This was a profound and violent shift in global politics and the discovery of the Americas opened the doors for other competitors. The Portuguese were first out from their Atlantic islands via northwest Africa to Brazil. Later, other emerging global powers too sought riches in the New World. By 1600, Spain was exporting back to Europe massive cargoes of gold, silver, precious gems, wood, dyes, and spices, changing forever both European culture and also the economies of Western Europe. Then came the French, the Dutch, and the English who each fought for control of territories in the New World. They all had small plantation economies in the Caribbean. But for the English, later the British, and the French, their destiny lay in the north.
54.8
They couldn’t compete with the Spanish in Central and South America. Not yet anyway. So by 1620, new English colonies were founded in what is today the region of New England. States like Massachusetts, Connecticut and New York, further north in much colder climes. America challenged notions of humanity, of culture, of the very idea of America. It never came fully formed from initial conquest. It took time to develop and in many ways it’s still developing as a national project. Think for a moment about Native Americans as well as just the competing and rival imperial powers. How did Native Americans react to Europeans? Far from being passive bystanders, they began to engage with the newcomers in new and hitherto unknown ways.
106.2
Remember though initially disease had killed off large numbers. By the late 17th century though their numbers began to recover as they built up immunities to European diseases. The history of the Native American is one of long engagement and adaptation to new arrivals from Europe. By 1700, British control was strengthening. The French remained around Quebec in what is today Canada but was then called New France and largely unexplored. While to the south lay ebullient British colonies, each with a separate relationship with London. Some were what was known as royal colonies. Some co-operative colonies, Commonwealths and so forth. Some of them were settled by pilgrims fleeing persecution in Britain.
156.6
Others made up of free born but indentured servants, while from the very start Africans made up a fifth of the population. Some were free, but most were slaves in the rising of new colonies in what is today the South, the Carolinas, and later Georgia. From the start it was a world of ships and commodities, including people. Soon however, European wars Had spilled over to the new world. By the mid 18th century, France was hemming in British colonies. It doesn’t take a strategic genius to work out the problem.
195.8
This conflict became known as the Seven Years War, but in America it is now known as the French and Indian War, mainly because, in America at least, it was a war which pitted the British and their colonists and Indian allies against the French and their Native American allies. This war in the middle of the 18th century became a turning point in history. By 1763, the British had thoroughly defeated France, who lost all of her Canadian colonies and several small but very valuable slave colonies in the Caribbean. Britain now held sway over a vast imperium rivaled only by that of the Spanish who by 1750 had their own problems to contend with.
242.3
Despite the victory, the price for the British had been very high. The national debt increased exponentially and because of the existing French population living in Canada and the threat of a resurgent France trying to take back their Canadian colonies, the empire would have to be defended. This meant an army, not just a ragtag group of regional colonial militias, but professional European troops, would have to be permanently stationed in North America to defend all this new land. Someone was going to have to pay for both the war and future defence expenditure. And how do people pay in the middle of the 18th century?
283.4
Through taxes and the people to be taxed were, so it was resolutely thought in London, would be the colonists themselves. After all they had been the main beneficiaries of the previous seven years of fighting. To that end, following the Seven Years War in the 1760s, a reordering of this increasingly large and diffuse empire was implemented by the British government. A series of taxes were introduced and further control and restrictions on trade also brought about. These acts, if you like, collectively became known as the Towns and Revenue Acts after a British Prime Minister by that name. To some in the colonies, they were an immediate imposition and something to be fought tooth and nail. Others quietly acceded to the logic.
335.1
If you were going to have an empire, then that empire was worth defending and worth organising properly. So what was the problem? Well on the eve of the American Revolution, American colonists were richer on average than their European counterparts. They were healthier and the most literate people in the British Empire. On average some 80 percent of men could read in British America versus perhaps 40 percent in Britain itself. And they were the least taxed people in the Empire. Why shouldn’t the American colonists pay for their own defence and for the administration that had made them so well looked after?

To start I’d like to give you a bit of a grounding in American history. For the purposes of this course, we will be looking at post-Civil War American history. I acknowledge that we do not cover the country’s history prior to the arrival of Columbus and therefore do not include much of the history of First Nations people. Indigenous peoples had been living in America for thousands of years prior to this time. The groups are represented in the map below. 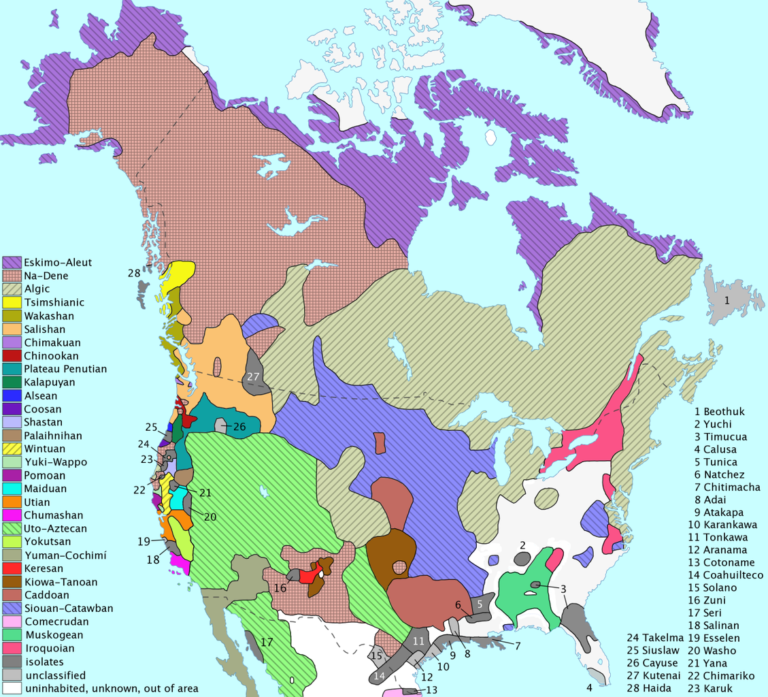 Christopher Columbus sailed across the ocean from Spain in 1492, and came across first the Bahamas, and then what is now Haiti, and then finally what is now Cuba. Here we see the arrival of Europeans, the decimation often through imported diseases of the Indigenous peoples who lived in the Caribbean, then perhaps the proper founding of the Spanish Empire which would eventually hold sway over all of Central and South America. But also somewhat loosely what is now the southwestern part of the United States. In the video above, I discuss this political shift in greater detail.

During this video, practise your note-taking skills. You can either type or hand write your notes in a journal. Think about how you’re going to organise your notes as you’ll want to record important information as you progress through the course. Share any difficulties you had with note-taking below in the discussion.

Help with study skills can be accessed from the University of Newcastle website. FutureLearn also has some useful tips on How to take great notes.