Hexadecimal is a convenient way of representing values in computing. This article explains why, and how to convert between denary, binary and hex.

Now you’ll learn the basics of the number system known as hexadecimal: I’ll give you an overview of the digits used to represent hexadecimal numbers, as well as how to convert numbers into hexadecimal from denary or binary.

Why we need hexadecimal

If you think C5 is easier and more convenient to remember and use, you now understand why some binary is expressed in hexadecimal format. Also, as we discussed earlier this week, technology has become very advanced using 1s and 0s, and this is partially because computers can represent very long pieces of data with shorter ones. C5 is actually the same value as 1100 0101, however it is represented as hexadecimal instead of binary.

In previous steps, I explained how different number systems work. Hexadecimal is a base 16 number system: it makes use of 16 numbers. So if we had a creature with 16 fingers, this is how they would count using hexadecimal: 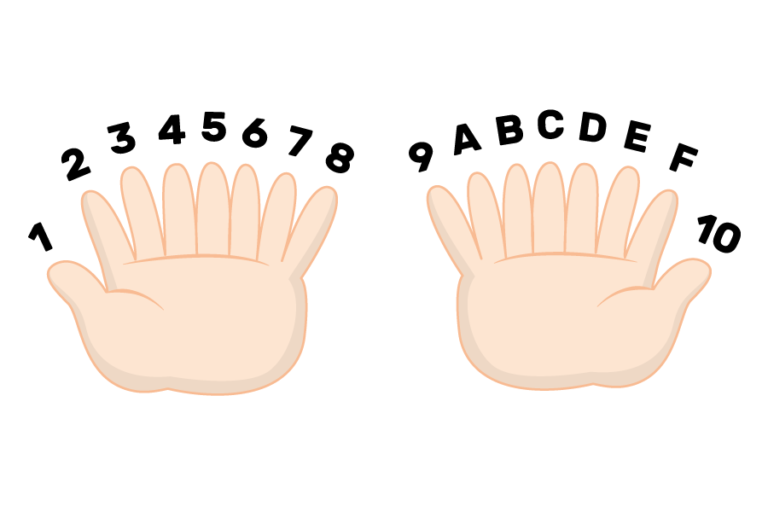 Hexadecimal is commonly used by computers because it can represent a byte of data with just two characters (instead of eight). Each hexadecimal character represents half a byte, also called a nibble. As hexadecimal is easier for humans to read than binary but is still easy to convert to binary, hexadecimal has a variety of uses, including in error messages, MAC addresses (used to identify a device on a network), character encoding, and RGB colours.

Converting between hexadecimal and binary

Converting between hexadecimal and binary is straightforward: each nibble of binary (half a byte/four bits) corresponds to one hexadecimal character. You can use the table above to convert a hexadecimal symbol to four binary bits, or vice versa.

Going by the table above, the hexadecimal number 7D is converted to binary like this:

Hexadecimal works very similarly, and with base 16 instead of base 10. Let’s convert hexadecimal A9 to denary: