Skip main navigation
Home / History / Ancient History / Rome: A Virtual Tour of the Ancient City / How did the Forum develop?

How did the Forum develop?

In this article Dr Matthew Nicholls explains in more detail about the centre of ancient Rome's political and commercial life: the Forum. 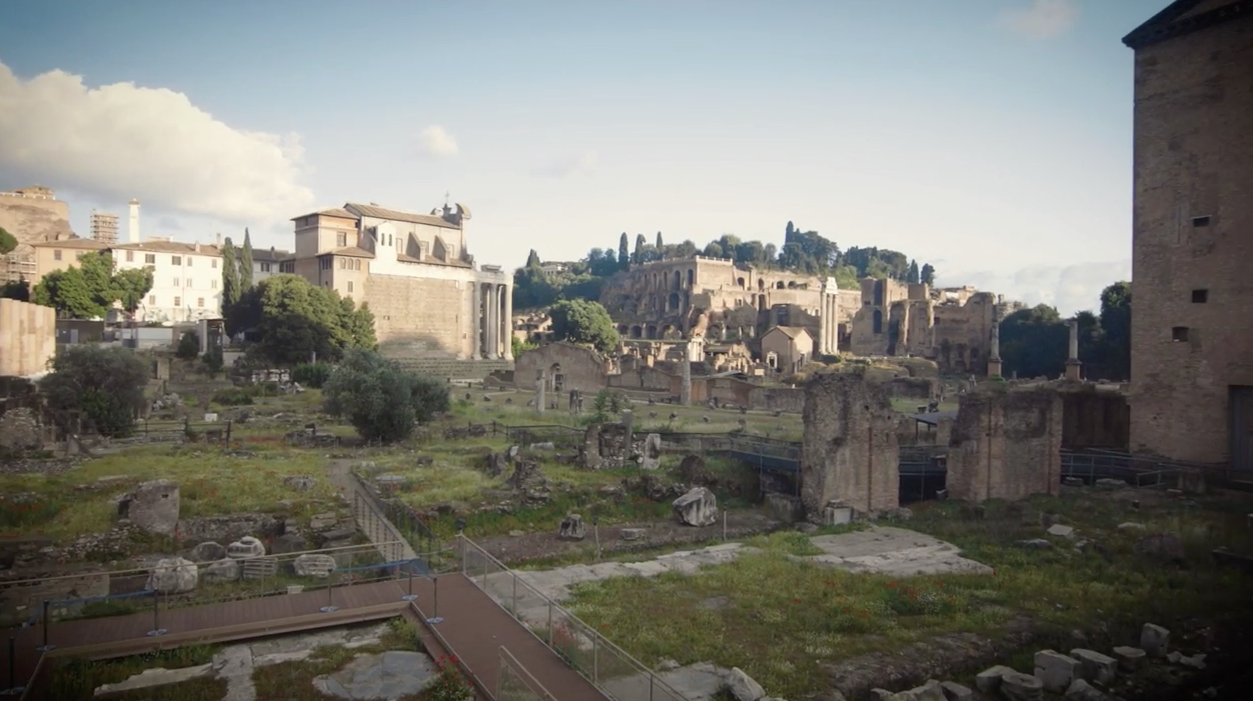 You’ve seen in our video and digital walkaround that the Forum stood in a space that was once a valley between the hilltop settlements of early Rome. Over the years, it became the centre of the growing city’s political and commercial life, before the emperors transformed it into the impressive monumental precinct that you see in the reconstruction. What do ancient texts add to the picture? Here the Augustan writer Ovid reminds us of the watery origins of the Forum, in words spoken in his poem by an old woman:

Here, where now the forums are, was once occupied by wet marshes: a ditch was saturated with waters running back from the river.
That Lacus Curtius, which houses altars, all dry,
Is now solid ground, but once was a lake.
Where now processions pass through the Velabrum on their way to the Circus,
There was nothing except willows and hollow reeds;
Often the revellers, going home across these waters on the edge of the town,
Would sing a song and cast his drunken words across to the sailors here…
The pools have receded and the banks keep the water in its place,
The land is now dry: but the old custom remains.
Ovid, Fasti 6.401-414.

As you saw in the previous Step, the Cloaca Maxima sewer drained these waters to make space for the Forum. Traces of these watery origins survive in some of the places Ovid names, like the Lacus Curtius, supposedly the site of a chasm that opened up in the forum. A spring sacred to the water nymph Juturna, and a shrine to Venus Cloacina (Venus goddess of sewers) were other monuments to watery deities.
The developing character of the Forum as a place of sacred, civic, and legal character is seen in the Black Stone (lapis niger), an area marked off by dark limestone paving near the much later Arch of Septimius Severus. Roman writers knew that there was something ancient and special about this site, but were not quite sure what:

The Black Stone in the Comitium indicates a place of burial. Some say it was intended to be the burial spot of Romulus, before he disappeared and made his burial impossible. Others say his foster-father Faustulus was buried here; others that it was Hostilius, grandfather of the Roman king Tullius Hostilius.
Festus 184L

In fact, the black stone(s) here are paving markers over not (as far as we know) a burial, but an ancient tufa pillar, probably from the sixth century BC, on which an inscription in archaic Latin provides tantalizing clues about this very early period in Rome’s history. The text seems to mention a ‘king’ and issues sacred prohibitions against various acts including desecrating the site of the inscription itself, explaining its careful later preservation in different levels of the Forum paving. The implication is that the Forum space from a very early date had a connection to law-making, monumentalisation, some sort of political or priestly authority, and sacred activities – all features of the later Forum which you see in the standing remains and our reconstructions.
This connection between sacred and the political is not surprising for ancient Rome where, religion played a part in many aspects of public and private life. You see this connection in the senate house (or curia) which was in fact a ‘templum’ – not a temple as we might think, but a space formally consecrated by Rome’s soothsayers or ‘augurs’. The second-century AD author Gellius provides a list of such spaces suitable for senate meetings, including the hall near Pompey’s theatre where Julius Caesar was killed, which you’ll encounter in Week 5:

[The Roman writer Varro] has written about the places in which a decree of the senate can be issued, and had shown us that unless such a decree is made in a place properly appointed by the augurs, such that we call it a templum, it is not legally correct. For this reason the curia Hostilia, the curia Pompeia and the Julia, none of them sacred sites, were approved as templa by the augurs, so that senatorial decrees could be issued in them according to this custom of our forefathers.
Gellius, Attic Nights 14.7.7

Figure 1: Digital reconstruction of the Forum Iulium (or Forum of Caesar).©Dr Matthew Nicholls, University of Reading, 2017.

Figure 2: Remains of the Forum Iulium (or Forum of Caesar). ©University of Reading

The senate house we see in the Forum today was built by Diocletian after a fire in AD 283. It stood on the site and followed the design of its predecessor, begun by Julius Caesar after another fire and finished under Augustus in 29 BC. But this earlier blaze was not accidental. It was started in 52 BC by a mob who raised an impromptu pyre to the murdered popular politician and gang leader Publius Clodius, a reminder of the Forum’s role as a theatre of lively, even violent politics in the dying years of the republic. Here is an extract from a trial speech in the defence of Clodius’ killer, by someone who knew the senate house well – the politician-lawyer Cicero:

What have we seen more miserable than this, more bitter, more mournful? The temple of sanctity, of majesty, of intellect, of public policy, the head of the city, the altar of our allies, the welcoming harbour for all races, the seat given by the entire populace to the senatorial order – burned, demolished, polluted…
Cicero, Pro Milone 90.

This idea of dissent, violence, and political grandstanding had long been part of the Forum’s history in the lively years of the republic. Our reconstruction video shows an imperial version of the Temple of Concord, celebrating the supposed harmony between the different classes or orders in Rome. However, an earlier version of this temple had been controversial:

But what angered the multitude more than anything else was the construction of the Temple of Concord by Opimius [a consul who had ruthlessly suppressed a populist movement in 121 BC]. For he seemed to think a lot of himself, and to be taking pride and in a way triumphing over the slaughter of so many citizens. So in the night some people carved this line under the temple’s inscription: “An act of mad discord produced the Temple of Concord’.
Plutarch, Life of Tiberius and Gaius Gracchus 17. 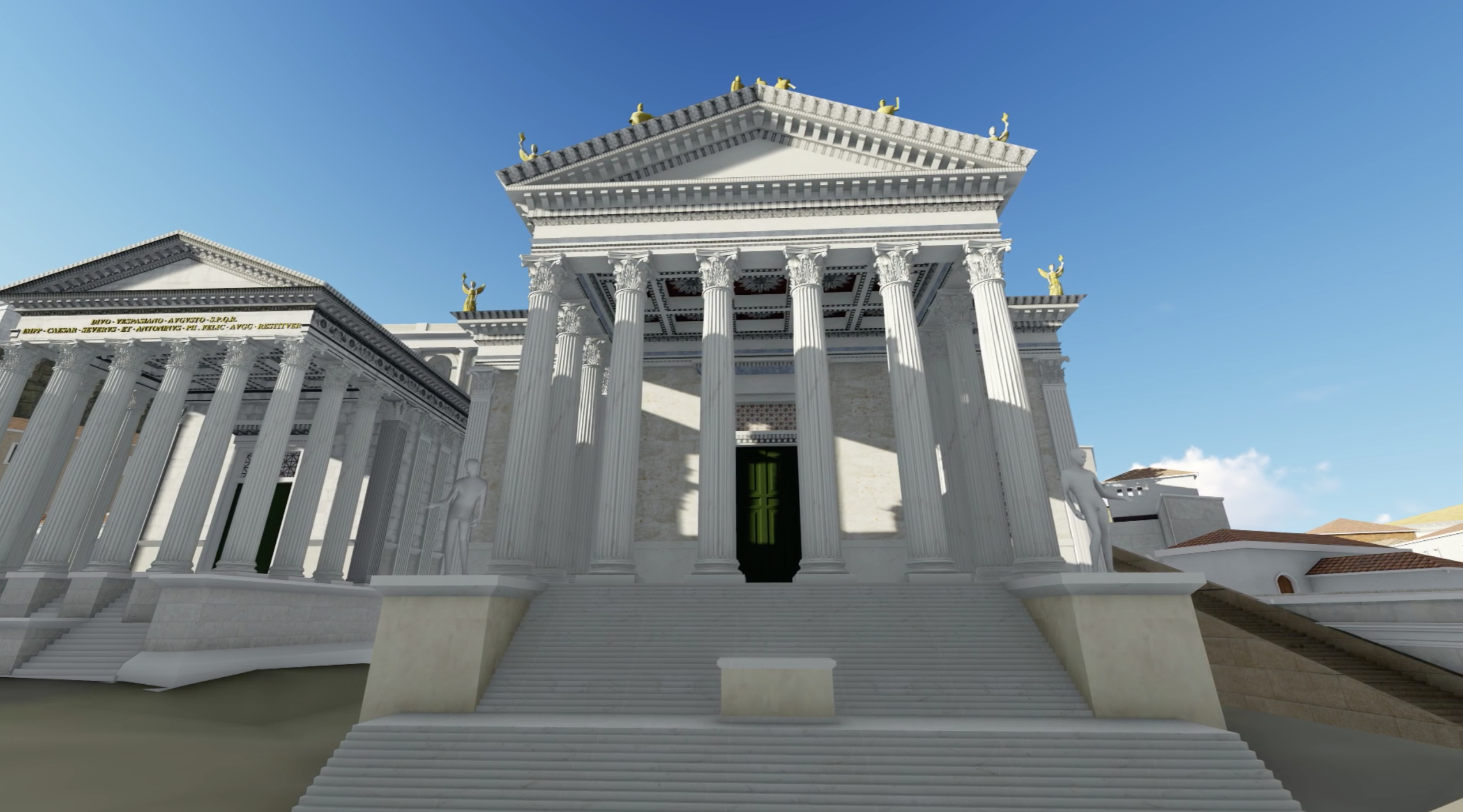 The Temple of Concord. ©Dr Matthew Nicholls, University of Reading, 2017.

The Forum, then, saw plenty of political strife and violence in its long history. By the time you see it in the model, under the relatively stable rule of the emperors, it had become a bit more grandiose and sedate. Augustus even seems to have tried to impose a formal dress code to match his monumental adornment of the space, worthy of his dignified vision of Rome:

He even tried to bring back the old fashioned form of Roman dress; once when in the assembly he saw a crowd of people wearing cloaks, he grew angry and called out: ‘Behold, the Romans – masters of the nations, the race that wears the toga!’ He told the aediles that they should not let anyone come into the Forum or its neighbourhood after that unless they were wearing a toga and had taken off their cloak.
Suetonius, Life of Augustus 41.

You can view Forum of Augustus in Rome in our 360° panorama picture.Please note: this link takes you to the external site ‘Panellum’.
© University of Reading

Hi there! We hope you're enjoying our article: How did the Forum develop?
This article is part of our course: Rome: A Virtual Tour of the Ancient City