Imperial temples, such as the Pantheon, remind us of the profoundly religious and war-like nature of ancient Rome. Find out more in this article. 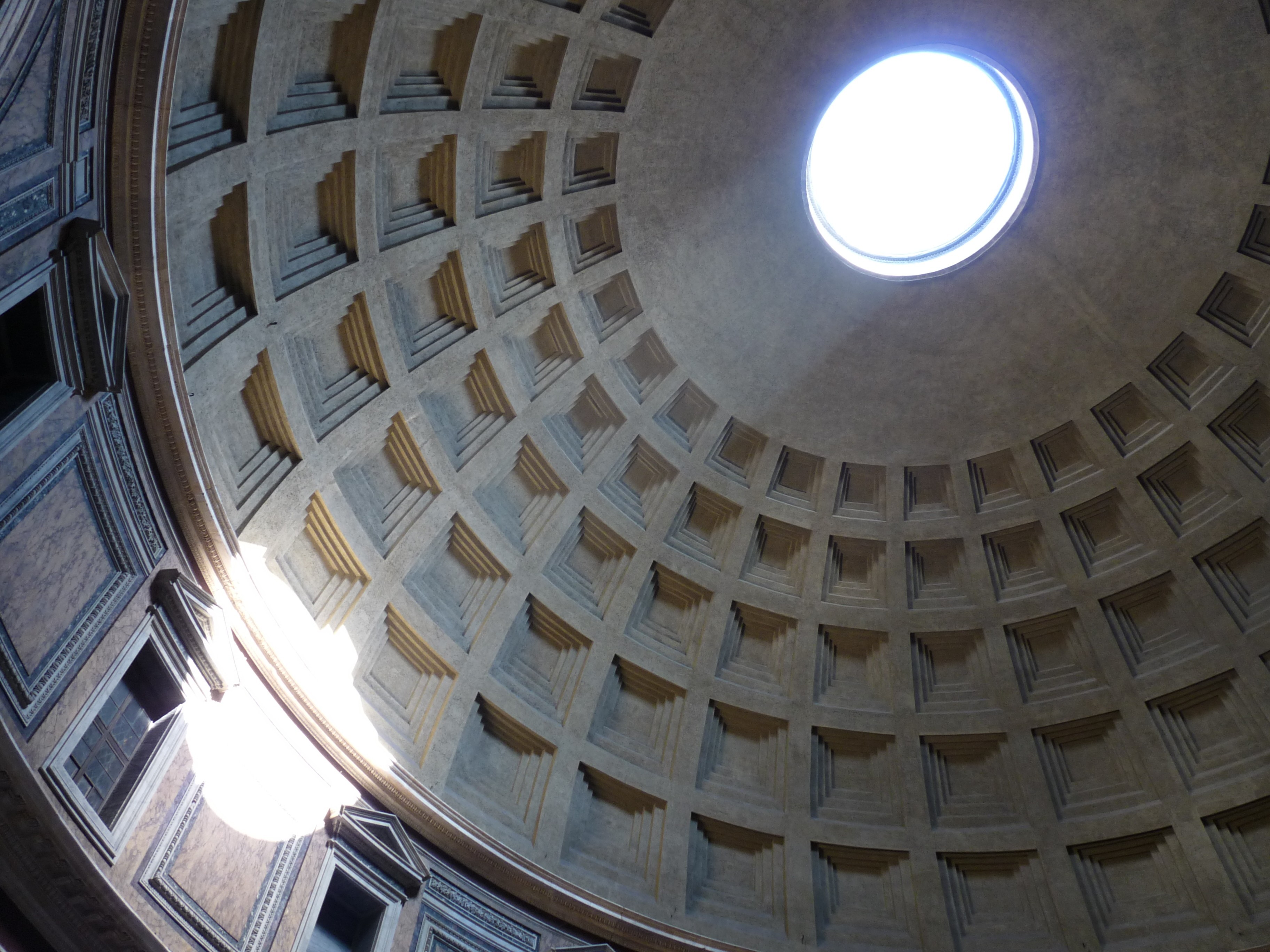 Am I mistaken, or do weapons sound? I am not mistaken, weapons were sounding: Mars is coming, and as he comes he has given the signal for war. The Avenger is coming down from heaven in person to his own honours and his marvellous temple in the Augustan forum. Both the god and the work are massive: in no other way was it right for Mars to dwell in the city of his son. This shrine is worthy of trophies taken from Giants; from here it is fitting that Gradivus [an epithet of Mars] should set in motion fierce wars
Ovid, Fasti, 5.549-56

This description by the Augustan poet Ovid provides a dramatic and atmospheric introduction to the temples of imperial Rome and reminds us of the profoundly religious and war-like nature of Roman society.
Any visit to Rome will inevitably provide a glimpse of the proud remains of the ancient city’s numerous temples, the majority of which cluster in the Roman Forum, the adjacent imperial forum complexes, and the neighbouring hills of the Palatine and Capitoline, with the latter once dominated by the gigantic temple of Jupiter Capitolinus (which you can see in the digital walkaround step). We know that Rome’s first emperor Augustus restored at least 82 temples (Augustus, Res Gestae 19-21); so it’s clear that temples were embedded within the very fabric of the urban landscape, to say nothing of the numerous smaller shrines and cult places that were dedicated to all manner of Graeco-Roman gods and spirits.
Generally, very few of these temples survive intact, with the majority looted for their building materials in later historical ages, often leaving only part of the original structure. The examples that survive best tend to have been preserved through conversion into a church early on in Rome’s Christian history.
Despite the varying levels of preservation throughout the ancient city, groups of fine marble columns and large imposing podiums or temple bases, especially those in the Roman Forum, provide a strong sense of their original architectural scale and splendour. Coins and sculptural reliefs depict temples such as Mars Ultor, helping us to understand their original appearance, especially when features such as the pediment and decorative elements have long since disappeared. Equally, references in the ancient sources provide valuable and insightful detail confirming their design and function, which in some cases could be not only religious, but also civic and political.
Many of Rome’s imperial-era temples were dedicated to mortals who, after death, were deified and worshipped as part of the imperial cult. This process began after the assassination of Julius Caesar; he was the first mortal to receive a temple in the Forum, built by his successor Augustus. This political aspect serves to remind us that temples were also expressions of elite power, built for and paid for by the ruling regime, as a means of leaving a permanent legacy in the city. 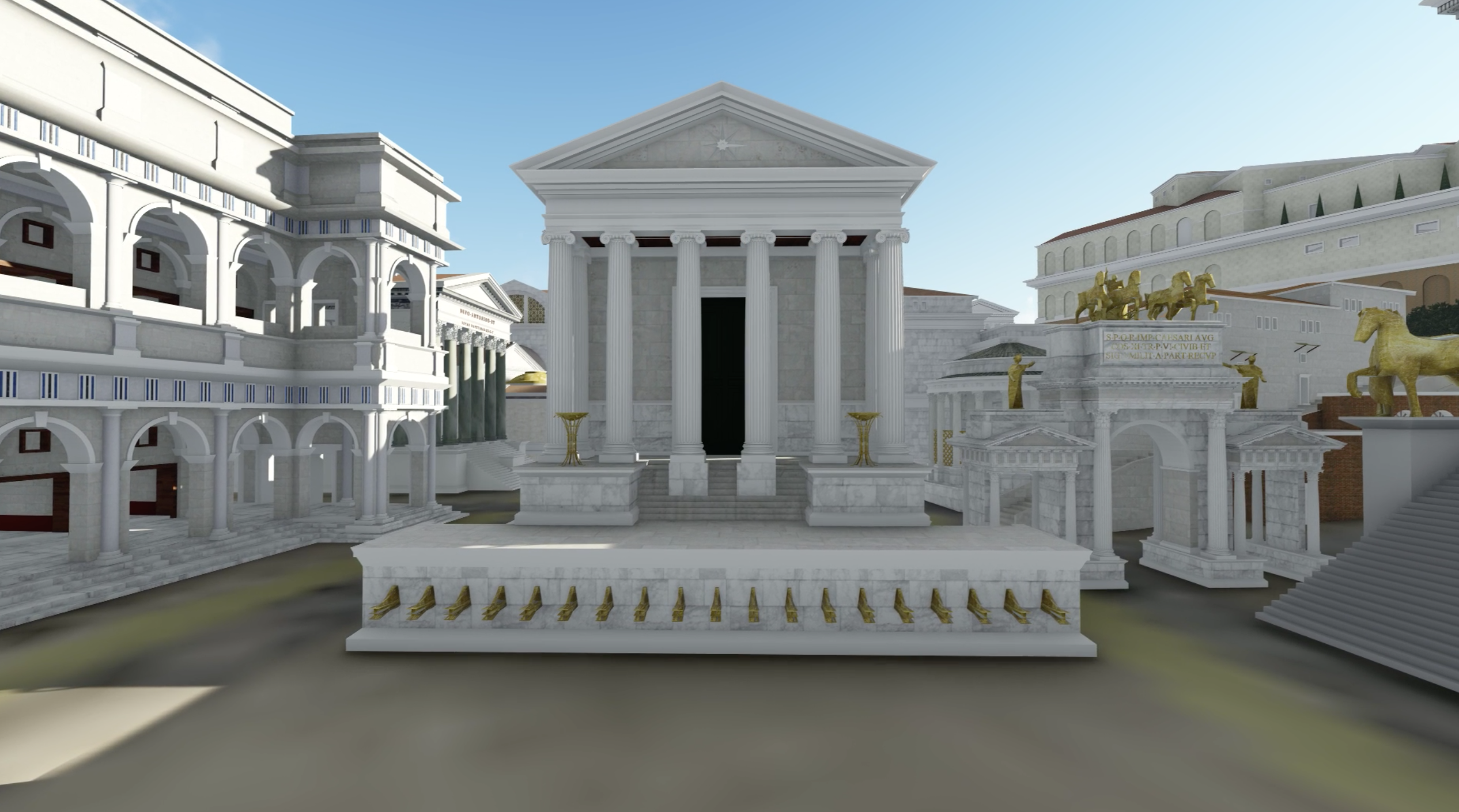 The classical columnar architecture of imperial temples is reminiscent of those from the Greek world, yet Roman temples had their own unique character and represented a fusion of both Greek and local Etruscan traditions. The majority were rectangular in form and served to house a statue of the god or gods within an internal chamber known as a cella. The whole structure was usually positioned on a tall podium with a frontal flight of steps, thereby enhancing its prominence within the urban landscape. The Temple of Saturn is a good example of how imposing these structures could be. Originally standing at a total height of 25 meters, the podium alone was 11 meters tall.
Most imperial temples featured six or eight tall, marble columns across the front, with further columns running the full length of the podium, usually engaged into the wall of the cella. During the rule of Augustus down to and including that of Vespasian in the later first century AD, columns were usually made from separate blocks of marble; by the time of Trajan and Hadrian in the early second century AD, large monolithic columns of granite were favoured, with those at temples such as the Pantheon standing approximately 12 metres high, weighing an estimated 100 tons each. Although both republican and imperial temples used the Classical orders (including Doric/Tuscan, Ionic and Corinthian), imperial Rome particularly favoured the use of Corinthian or composite, luxurious orders that featured finely carved depictions of acanthus leaves in the capitals located at the top of the columns. Above the column capitals was the architrave and pediment, both of which typically featured a range of sculpted figures (usually deities and mythological figures) and carved decorative motifs, thereby adding a further sense of luxury and splendour. It was also here that an inscription might be placed, describing who had built the temple, or who was responsible for its restoration. 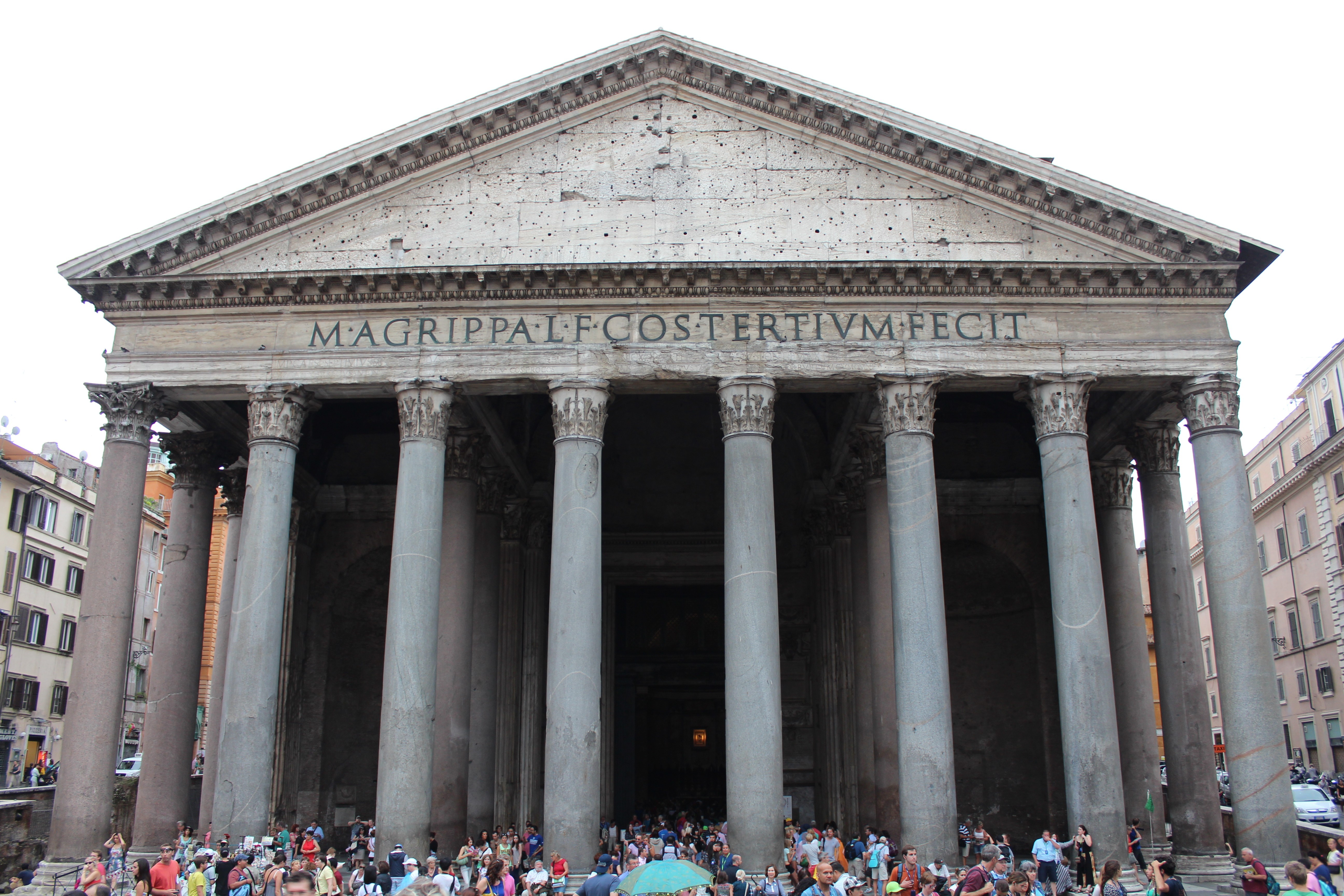 From the time of Augustus, temple construction was controlled by the imperial regime, and subsequently reflected imperial wealth and grandeur. A prime example is the temple of Mars Ultor (Mars the Avenger) in the passage at the start of this article, complete with fluted columns of Italian white Luna marble, ornate Corinthian capitals, and a pediment decorated with sculpted images of the gods. Set within the Forum of Augustus, the temple was surrounded by a veritable art gallery of bronze sculptures. Depicting mythological and historical figures from Rome’s history, these sculptures were set in porticoes lavishly decorated with columns and floors of exotic, coloured, marble sourced from northern Italy, Greece, North Africa and Turkey.
First introduced in the Forum of Caesar with the temple of Venus Genetrix, (also completed by Augustus), this very grand style of temple architecture was later developed on even larger scales (such as in the Forum of Trajan). The sudden explosion in architectural refinement and from the time of Augustus onward indicates the presence of highly skilled craftsmen from Greece or Asia Minor, where marble temples had been common well before imperial Rome. 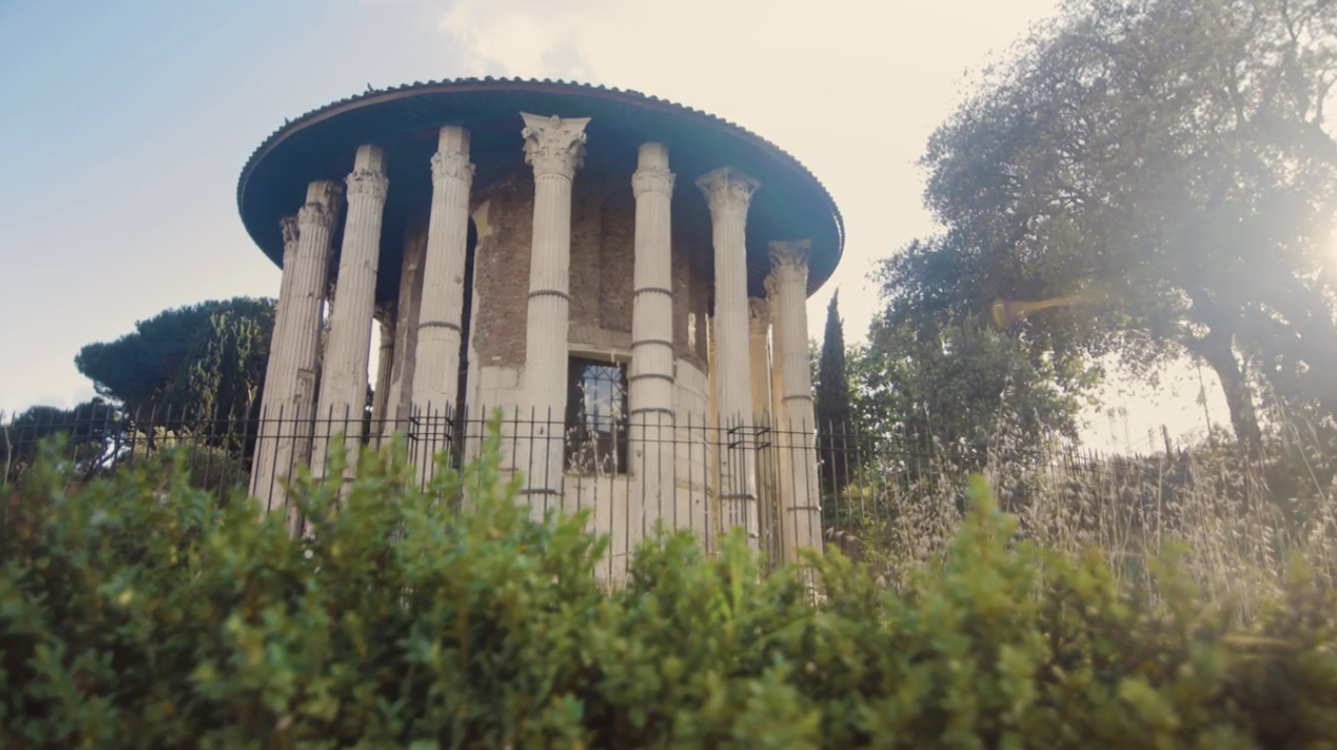 Although many temples followed the standard rectangular format, there were exceptions. We know for instance of circular temples within Rome, such as the ‘Temple of Hercules’ in the Forum Boarium, and the Temple of Vesta in the Roman Forum. The most spectacular example is the famous Pantheon, dedicated to all the gods, first built by the Augustan general Agrippa (as per the inscription that survives on the front of the building), but later rebuilt by Hadrian. We can see the architectural splendour of this building in the video. The engineering skills required to construct the dome demonstrate the Roman mastery of concrete which truly revolutionised architecture and set the Romans free from the relative limits of using blocks of stone and marble alone.You can view the temple of the deified Hadrian in Rome in our 360° panorama picture.Please note: this link takes you to the external site ‘Panellum’.
© University of Reading

Hi there! We hope you're enjoying our article: Imperial Temples in Ancient Rome
This article is part of our course: Rome: A Virtual Tour of the Ancient City