The vast choice of foods on offer to the Tudor courtier was impressive and included meat, fish, fruit and vegetables. Learn more in this article. 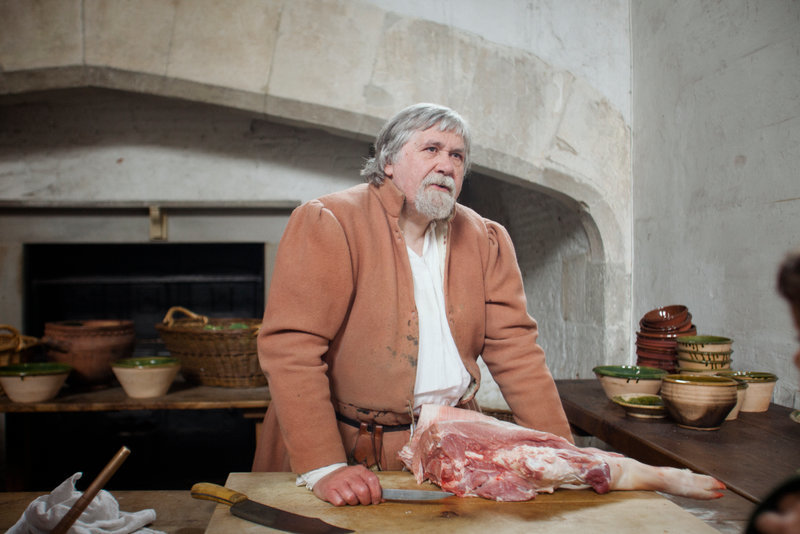 The long-awaited christening celebration for Edward would have marked a high point in the decadent feasts at Hampton Court Palace. But what would have been on the menu? Undoubtedly the feast which accompanied the christening was a monumental affair, however we actually know very little about what was served. What we do know is that this was a court which ate well and enjoyed food as a spectacle on a day-to-day basis, and so the menu for this momentous occasion must surely have been truly magnificent. We know meat rarely formed part of the average Tudor person’s diet, being expensive to procure and to roast. However this was not the case at court, where the amount of meat consumed by the Tudor aristocracy was immense. The royal court’s annual provision of meat consisted of: • 1,240 oxen • 8,200 sheep • 2,330 deer • 760 calves

View Course
• 1,870 pigs • 53 wild boar And these figures don’t take into account the additional requirements of lavish, one-off feasts, such as Edward’s christening! The rarest and superior meats were always reserved for the King’s table, but a senior Tudor courtier could still expect to choose from a wide variety of fresh meat dishes including roasted mutton, pork stew or chicken pie. Thomas Starkey, who visited Hampton Court, records:

(‘A dialogue between Cardinal Pole and Thomas Lupset, Lecturer in Rhetoric at Oxford’, 1529-32)
Along with the more familiar items listed above, which many of us would eat today, there were also animals and birds which are now protected, including peacock, heron, egret and dolphin. Or the Tudor courtier could tuck into a dish of roasted swan, prepared by the kitchens: 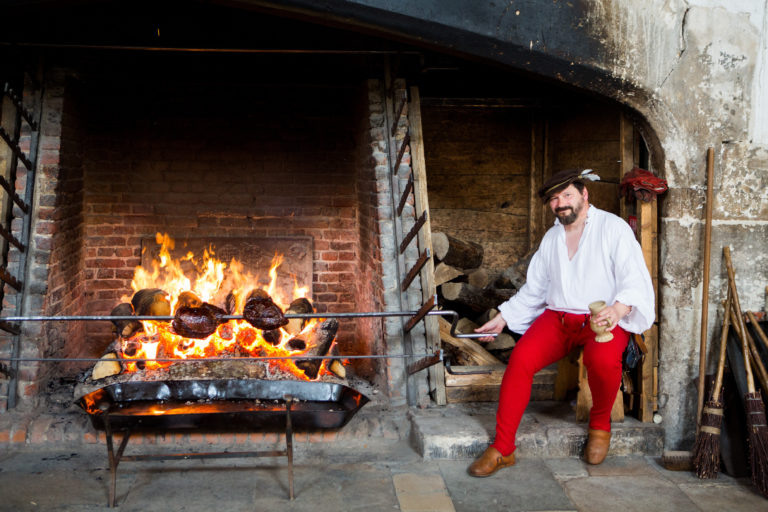 While meat was always a popular choice on the court’s menu, Wednesdays and Fridays were decreed by the Church as ‘fish days’ where meat was not to be eaten. As with the variety of all food types, social standing affected your menu. The servants’ menu for a fish day might be simply cheat (bread), ale, herrings or salted ling (cod). Higher ranking individuals had better options as seen in a 1526 menu for Henry VIII and Katherine of Aragon:

Meat and fish were certainly high on the menu for the nobility, but while vegetables were more often seen as the food of the poor, they were not entirely absent from aristocratic tables. Cabbage, peas, broad beans, leeks and onions were all served up to Tudor diners.
Fruit ranged from those items that could be grown in England – such as apples, pears, cherries, plums and strawberries – to the more exotic imports like lemons and oranges. In fact, Henry VIII’s first wife, Katherine of Aragon, was instrumental in making oranges from her native Spain popular at court (Henry was fond of them preserved, as marmalade). Records show that fruits from the orchards planted at Hampton Court by Cardinal Wolsey were stored and eaten by the King, and Henry even ordered apricots to be grown. 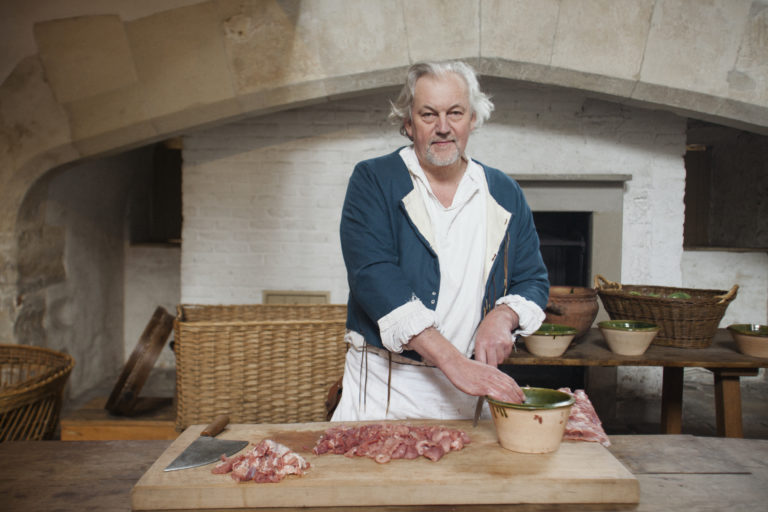 Importing foods from the Mediterranean not only added an exotic element to the extravaganza of royal feasts but, was a real statement of wealth and power. Mediterranean staples like citrus fruit, olives, artichokes and almonds would have added glamour to the Tudor table and would have enhanced the King’s status. However, one of the most prominent imports were spices.
Most of the food served to court would have been served with a sauce, flavoured with herbs and spices including the exotic flavours of ginger, cinnamon, pepper, liquorice and mace. A common misconception held was that spices were used to cover the smell and taste of bad meats. However the indulgent court could readily afford the freshest meats and would hardly need to eat foods that were past their best – rather, spices were luxury items and their presence (and the quantity) were again, markers of wealth and status.
A great example would be Beef-y-stywyd which contained cinnamon, cloves, mace, grains of paradise (a peppery spice, obtained from ground seeds), cubebs (a type of long pepper from China), onions, parsley, sage, vinegar, saffron and salt. Bread would have also been added to the Beef-y-stywyd, to thicken up the stew, and it was also often placed at the bottom of serving bowls to soak up the juices. Breads including Maslin (coarse bread made from mixed flour), Cheat (everyday bread made from wholemeal) and Manchet (white rolls made from finely sifted flour) were staples in the Tudor diet and were served at every meal.
Salt and sugar were also important commodities as they could be used both to season and preserve. Salt was so prized that the average daily consumption was over three times the recommended intake today (at around 20 grams a day). 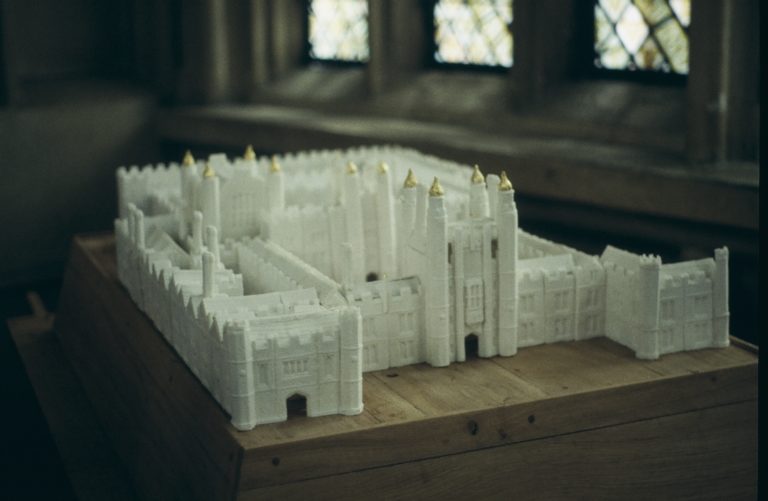 But, not all the ‘food’ on the menu was meant to be eaten. Sometimes the most elaborate dishes were actually ‘subtleties’: dishes that were created from either sugar and almond paste, or wax. While they were not designed to be eaten, subtleties added to the theatrics of the dining experience and played a huge part at every lavish feast. When, in 1527, Cardinal Wolsey hosted a court feast for the French ambassador, it included more than a hundred of these subtleties and ‘devices’ in the second course alone. At Wolsey’s feast, these food sculptures were made to look like buildings (including St Paul’s church), animals, people (including models of people dancing and jousting), and a chessboard.
The vast choice of foods on offer to the Tudor courtier was impressive. A Spanish visitor to the English court wrote about Queen Mary I, in 1554:

If you would like to see how a Tudor mould for sugarwork was made, history blog ‘Cooking the Books’ shows the making of a mould from start to finished!
© University of Reading and Historic Royal Palaces