How can we learn from submerged archaeological landscapes? In this article, Dr Fraser Sturt discusses a range of methods that are used. 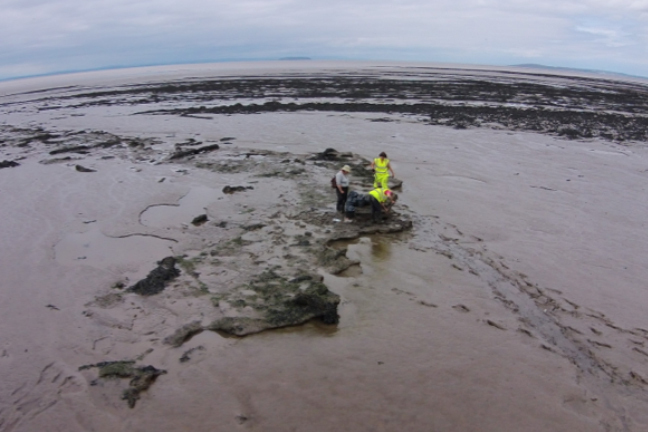 The term ‘submerged landscapes’ can make it sound like the sort of material being described is the same the world over. However, just as with archaeology on land, the term covers a wide range of landscape features and sites covering a period of over 2.5 million years that may have been inundated and exposed on a number of occasions.

It incorporates old coastlines, river systems, uplands and lowland landscapes, as well as settlements from the earliest days of prehistory through to yesterday. Indeed, some sites we explore may only be submerged part of the time, lying in the modern inter-tidal zone rather than being permanently underwater. As such, there are a range of methods which we deploy in order to better understand the archaeological record locked away within them, depending on the specific questions we need to answer.

The first thing we often do is carry out a geophysical survey in order to understand the nature and extent of deposits across a region. This will use methods that survey the surface of the seabed (sidescan sonar, swath bathymetry) and those that look beneath the surface (sub-bottom profilers). This allows us to create a three-dimensional model of the seabed, which we can then follow up by a series of cores (taken either by a large survey vessel with coring equipment on-board, or sometimes by divers with hand coring equipment). These cores give us a greater understanding of the nature of the deposits and tell us if they represent an intact sequence (what we call primary contexts), or material that has been moved back and forth through time (secondary contexts). Both primary and secondary contexts can provide useful archaeological information, but are often suited to different investigative methods.

In primary contexts the deposits that make up the site remain in the same order as when they were laid down. As such, on sites of this sort we can recover material and identify structures from the place where people left them in the past. In these areas we will excavate in a similar way to that which we would use on land. If the depth of water allows, divers can be sent down and a metal grid established over the site. 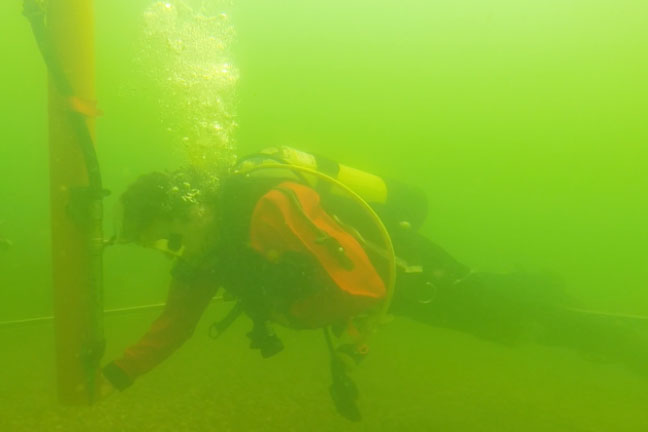 Using an airlift to remove sediment © University of Southampton, 2017.

In the photograph above you can see one of the masters students from the University of Southampton maritime archaeology course learning how to use an airlift to remove sediment, while moving around the site on a metal grid. The grid allows us to both record accurately where material has been recovered, through setting up a reference framework, and gives a support that the archaeologists can use to move around (when we work on excavating a shipwreck or prehistoric site with a grid we will take our fins off and just use the tips of our toes on the grid to help move us around). Using either dredges or airlifts archaeologists can then slowly remove the sediments to reveal the archaeological artefacts and remnants of past settlements.

The joy of being underwater is that organic remains which aren’t often found on land (unless you are working in a wetland area) can be preserved, and it is often easier to excavate these delicate materials underwater than it is on land. The diving archaeologist has the advantage that they can float above the site, putting no pressure on the material they are digging through, removing tiny amounts of sediment at a time to reveal the artefacts below. This allows the degree of control required to stitch together what the fragments of activity excavated indicate about prehistoric lives. 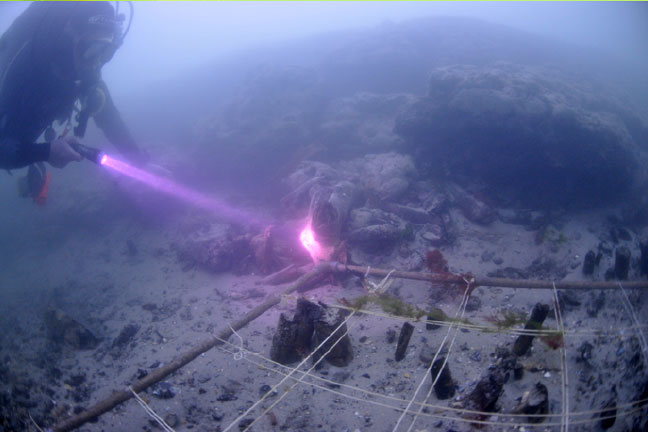 In the photograph above you can see an archaeologist from the Maritime Archaeology Trust surveying the Mesolithic (c.10,000 – 4000 BC) site of Bouldnor Cliff, off the south coast of England. Here a small metal grid is being used to draw a series of wooden stakes and to note the location of stone tools on the sea-floor. This is very similar to what we would do on land to record prehistoric artefacts and structures.

Secondary context areas relate to deposits that have been moved, but still contain useful archaeological information. A good example of this is Palaeolithic handaxes (stone tools) contained in river gravel deposits. At some time in the past Palaeolithic hunter-gatherers dropped their axes either in the river or in close proximity to it. Then, as the river course changed, the artefacts were washed away and incorporated into the coarse grained river sediments. To check for this sort of material we can sample the seabed at regular intervals using grab samples, or work with industries extracting sand and gravel from the seabed by looking at what comes up as the seabed is dredged. Although the material is not found where people left it in the past (it is not in situ, as archaeologists say) it can still tell us a lot about our prehistoric ancestors. Firstly, some of the very earliest tool types are very rare, thus, finding a stone tool can help us to document the presence of a particular group in a certain area. This can redefine what we know of when occupation may begin in a region or how far certain species travelled. A good example of recovery of material from these sorts of contexts is the stone tools found during dredging operations in the southern North Sea, and subsequently investigated by Wessex Archaeology.

Essentially there are a great many different methods available to maritime archaeologists interested in investigating submerged prehistoric sites, depending on the scale they are working at, or the types of deposits that are being encountered. Importantly, these methods range from highly controlled excavation through to landscape sampling. We are always looking at ways to improve our ability to detect, excavate and record sites underwater, with each field season pointing to ways in which we can improve. If you have any thoughts or questions about how we work on these sorts of sites, just ask in the comments section.

The image at the top of the step shows University of Southampton students excavating the remnants of an early-mid Holocene submerged forest on the west coast of England as part of a project funded by Historic England. The surface they are standing on is an exposed peat shelf in the modern inter-tidal zone. This ancient wetland landscape developed in a well-established forest landscape as sea-levels rose. It is now submerged for most of the year, apart from at very low tide. Although certainly not glamorous, the material recovered can tell us a lot about changing environments and human activity in the region, from a sort of landscape now largely lost on land.