How can we identify when a wreck was from? In this article, Thomas Dhoop introduces a case study: Doel 1, a medieval cog found in Antwerp, Belgium. 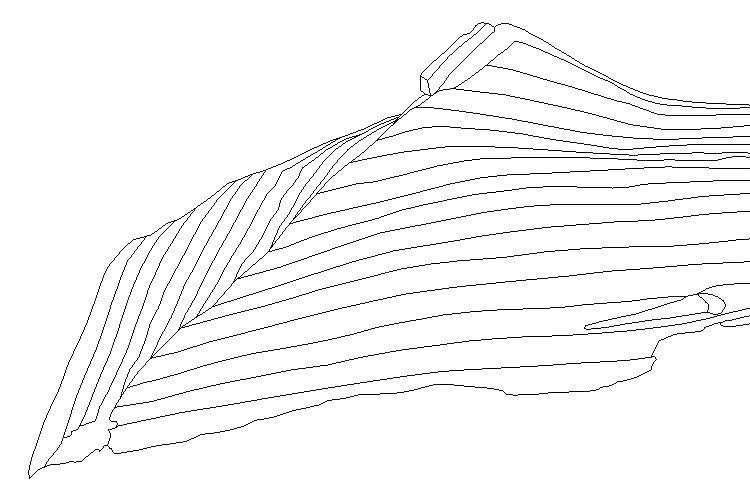 In 1999, construction workers started digging the Deurganckdok* in Doel, Belgium, as part of the expansion of the port of Antwerp. On the 14th of September 2000, at a depth of about seven metres, the excavator dragged up massive pieces of wood. Closer examination revealed that they had hit a large wooden structure. While exposing this structure, it soon became clear they had found a ship, 21m long, 7m wide and lying upside down, with its keel facing upwards. 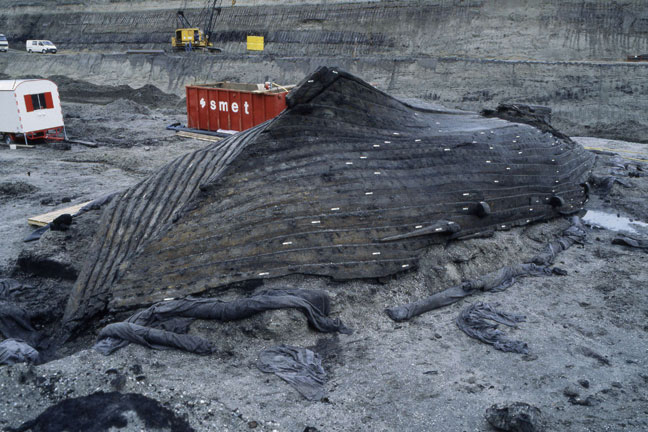 Doel 1 – planks. Image by Archeologische Dienst Waasland © University of Southampton, 2017. From the start, the ship was identified as a cog*, a popular medieval seagoing cargo-ship. There are a number of technical characteristics that distinguishes a cog from its contemporary, the lapstrake-built ship. Cogs had a flush-laid bottom amidships, that gradually transitioned into overlapping strakes near the ends of the vessel. The sides were entirely lapstrake-built, fastened with double-clenched iron nails. What made a cog visually stand out from afar were its straight stem and stern posts. Cogs also had strong crossbeams, often sticking through the hull and carried a stern rudder. 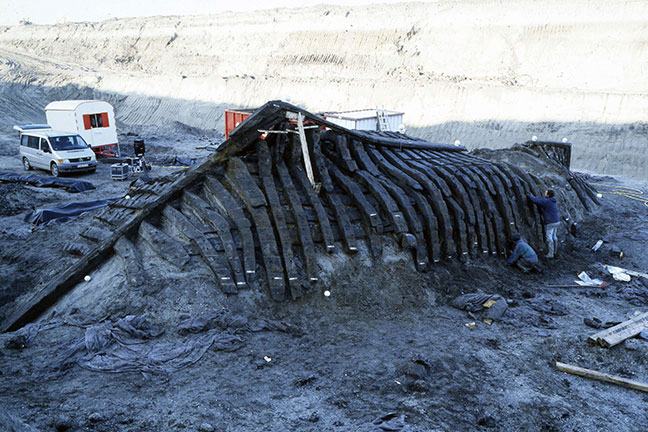 Doel 1 – frames. Image by Archeologische Dienst Waasland © University of Southampton, 2017. Because the groundwater had corroded most of the iron fastening elements holding the ship together, it was impossible to lift it as a whole. Therefore, after each individual timber and plank was given a unique code, the ship was disassembled and stored in large containers filled with water to prevent the pieces from drying, cracking and warping. This allowed the timbers to be studied and recorded one by one. After conservation, using the code-system, the ship can be re-assembled like a big puzzle. 99% of the hull of Doel 1 was built using oak trees. The reason for this is simple. Oak was widely available in European forests. Furthermore, the inner part of an oak log, the heartwood, is fairly resistant against fungi and wood-boring insects, this in contrast to the sapwood, the ‘living’ wood of the tree, which is located directly underneath the bark and is much more sensitive to organisms and other biological decay. Oak is hard and strong, but can be bent in shape when heated over a fire, exactly what shipbuilders needed for the planks of their ship. However, some parts of the vessel were deliberately made out of a very different kind of wood. The fairings were made out of alder, which is much softer than oak. If Doel 1 were to collide with another ship or a dock, a fender made out of oak would be strong, remain intact, and bore its way through the hull. A fender made out of alder however, would shatter and absorb a lot more of the impact, keeping the hull intact. Using a method called dendrochronology, the wood can also inform us about the date the ship was built and where the timbers it was made of came from. Studies showed that the wood used by medieval shipbuilders to construct Doel 1 was cut between the autumn of 1325 and the spring of 1326 and most likely originates from Lower Saxony in northwest Germany. However, this does not mean that this is the exact date and place where the cog was built. Once trees were cut, they were traded all over Europe. After arriving at their destination, timbers would sometimes be stored in water to keep them from deforming and to be used later on. However, according to the dendrochronological and archaeological research it does seem that Doel 1 was built shortly after its cutting date. It also seems plausible that all timber came from a large batch of wood from the same area. 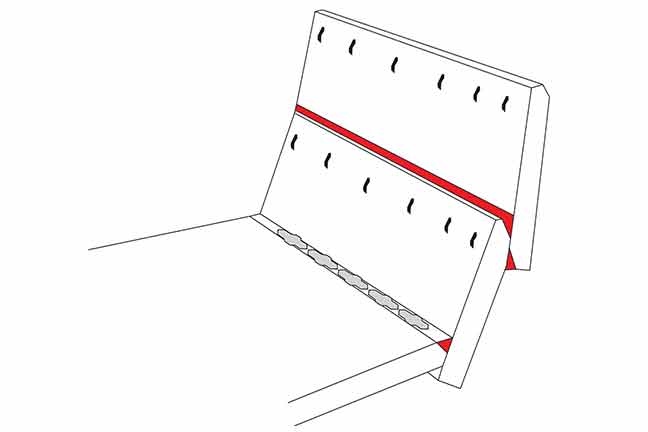 Caulking. © University of Southampton, 2017. Perhaps surprisingly, also moss is a vital part of the construction of Doel 1. Boats built with planks are not watertight and the seams between planks have to be sealed. This is called ‘caulking’. Using a caulking mallet, shipbuilders would drive moss into the wedge-shaped seams and covered them with a wooden lath and an iron staple called a sintel. When the moss came in touch with water, it would swell and seal the seam. The techniques and material used for caulking differs in time and space. For example, the Egyptians mainly used papyrus, while the Vikings used the hair of sheep, horses and cattle. From the early medieval period, Britain and most parts of Scandinavia used the hair of cattle, goat and sheep. In the rest of northwest and central Europe mosses were preferred. These were readily available, easy to collect in large quantities and could be delivered to the wharf fast and cheap. Repairs are sometimes caulked differently from the rest of the ship. Researchers found sheep wool in a repair of a crack from Doel 1 which might suggest that the ship was repaired in Britain or Scandinavia. Doel 1, built around 1325, probably in northwest Germany, and sunk in a tributary of the river Scheldt, in Doel, near Antwerp, reflects the socio-economic needs and ambitions of this region in the 14th century. Thanks to the sale of cloth during annual fairs, Antwerp was in the process of becoming one of the major trading towns in Europe, a competitor for Bruges. In the 16th century, generally regarded as the ‘golden age’ of the city, it would finally fulfil this ambition. For help with nautical terminology see the glossary. Thomas Dhoop *This website is in Dutch. If you use Google Chrome web browser then it will offer to automatically translate it for you.
© University of Southampton, 2017