Why build a replica? Watch Professor Jon Adams explore experimental maritime archaeology on location at Buckler's Hard.
View transcript
6
PROFESSOR JON ADAMS: I’m Prof. Jon Adams from the University of Southampton and I teach maritime archaeology and today I’m here with our master students of maritime archaeology. And we’re engaged in two projects, one of which is to study the techniques by which shipwrights for the last sort of 600 or 700 years have converted the trees of the forest into the elements and components of the boats with which they eventually sailed around the world.
32.5
And one of the reasons we’re doing this is that when you study maritime archaeology, ships and boats are perhaps one of the most important artefact types that we deal with in that field of archaeology and you can learn an awful lot about ships from books and you can see line drawings and photographs of all the things that have ever been found but when you actually have a go at making the elements of the water craft of the past, converting the timber from the forest, using the tools, understanding how the tools are used and more importantly than anything else, understanding the marks that the tools leave in the timber, then, as an archaeologist, you can read the timbers that you subsequently find from the archaeological record.
70.2
So that’s why the students here are essentially having a go at every single technique that the mediaeval shipwrights would use through to the post-medieval shipwrights of the great era of the sailing navies that lasted up until the 19th century.

Ancient ships and boats hold great potential to inform us about the past. On the one hand, they reflect general aspects of society such as technology, communications, trade, warfare, fishing, settlement and even cults. On the other hand, the individual history of the ship can be traced as far as possible and a ‘biography’ of the vessel can be composed. Archaeologists undertake replica-projects to gain new insights into several aspects of a ship find which eventually leads to a better-founded analysis and publication of the original find. After having to deal with the range of problems in constructing the ship and putting it through sea-trials, archaeologists are able to present the evidence of the original ship in a more comprehensive way. Archaeologists do not undertake these projects by themselves and often add boat builders, sailors and volunteers to the team. More on the dialogue that this work generates between maritime archaeologists and boat builders can be found on the blog that accompanies this course. Replica-projects are not undertaken ad hoc, but require extensive planning and thinking beforehand. Ole Crumlin-Pedersen, one of the pioneers of archaeological replica-building in northern Europe, stated that the following requirements should be met when building a replica: The reasons for building a replica are more diverse than mere archaeological interest in boats and, if done correctly, the process of construction is more important than the final product. The goals put forward by such projects generally resemble the following: Two short examples from the construction of Viking Age ships in Denmark illustrate what can be learned from replica-projects. In 1974, the accounts of the Viking Age merchant, Ottar (Ohthere), were re-examined and put to the test with the help of the replica Sebbe Als. According to Ottar, he could make the voyage from Kaupang at the mouth of the Oslo fjord to Hedeby in Schleswig in five days. Sebbe Als proved that the account was not exaggerated and that an average speed of five knots can easily be made in good weather. 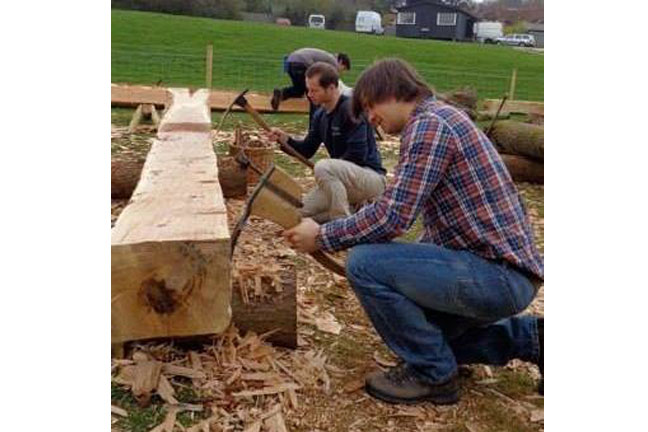 View Course
During the construction of Imme Skinfaxe in 1982, it was found that the adze, a tool believed to have been used by Viking Age shipwrights, does not correspond to the tool marks which can be seen on the Viking Age ships found in the archaeological record. Furthermore, an adze turned out to be particularly unsuitable for hewing or dressing the plane and straight strakes, at least in comparison with the long-handled axe and broadaxe that were used instead. Especially the broadaxe proved an excellent and ideal tool to plane with and it fits very well with the tool marks on the planks.

A person holding a broadaxe. © University of Southampton, 2017. Thomas Dhoop