In this article, Dr Christer Petley discusses how the transatlantic slave trade contributed to the Age of Sail. 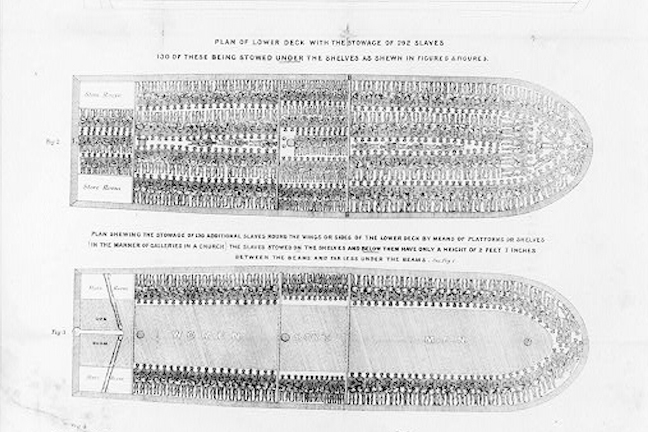 The transatlantic slave trade was the forced migration of millions of Africans across the Atlantic Ocean to work as slaves in the Americas. It was a brutal form of commerce that treated people as items of property. The trafficking of enslaved Africans across the ocean began during the sixteenth century and continued until the nineteenth century. Estimates of the slave trade show that at least twelve and a half million men, women and children were forced across the Atlantic in European ships during this time.Many slaves died before leaving the African coast, and the horrendous conditions on the ocean crossing – often referred to as the Middle Passage – meant that more than one in every ten slaves died before reaching the Americas. Those who did survive these voyages were forced to work in various occupations but by far the most common form of work was agricultural labour on New World plantations. Most of them ended up producing crops like sugar, tobacco, cotton, indigo or coffee – crops that fed a rising demand in Europe for cheap tropical luxuries.The slave trade was part of a transatlantic system created by European merchants and planters from various maritime nations, including Portugal, Spain, France, the Netherlands and Britain. It was a system driven by private investment but encouraged and protected by national governments, and it involved complex maritime and commercial logistics that connected three continents by means of navigation around the Atlantic Ocean. Colonies in the Americas were linked to markets in Europe and to a ready supply of enslaved labour from West Africa. At the centre of the system lay the plantation, and it was the cultivation of one crop – sugar – that did most to shape the experience of slavery in the Atlantic and that sealed the fates of millions of enslaved Africans. Most of the slaves who were forced to cross the Atlantic went to Brazil and the Caribbean – regions dominated by sugar production.By the time that Christopher Columbus sailed to the New World in 1492, Europeans had begun to experiment with the production of sugar. After trying sugar production on Atlantic islands like São Tomé and the Cape Verde Islands, Portuguese planters successfully raised crops in Brazil, and during the seventeenth century, a Sugar Revolution swept through the Caribbean.The arduous work required to produce sugar made it difficult to find people to work in the cane fields and encouraged European planters to turn to slave labour. The character of tropical sugar production also meant that planters became dependent on the slave trade from West Africa. On the plantations, slaves died more quickly than they were born, meaning that slaveholders regularly bought newly trafficked people simply to keep up the number of workers on their plantations.There were some exceptions to this. Only about one in every twenty of the enslaved people who survived the Middle Passage made landfall in North America: the region that became the United States. There, rather than arriving via the slave trade from Africa, slaves were more commonly born into slavery on the plantations where they were forced to work. However, it would be a mistake to assume slavery in North America was a benign institution. There, as across the Americas, enslaved people were kept to their tasks by the use of torture and terror. The whip was synonymous with this, but it was just one of many physical and psychological techniques that slaveholders used to keep slaves in a continual state of uncertainty and fear.

View Course
Slaves were never the passive victims of slavery. Everywhere that slavery existed, so too did resistance. This was evident on the ships that crossed the Atlantic. About one in every ten slave ships witnessed a revolt of some kind, but only a few of these uprisings (like the famous Amistad case) resulted in the successful seizure of the vessel. Slave ships employed larger crews than normal merchant vessels and carried equipment to deal with efforts by enslaved people to resist or escape, including netting designed to prevent people from jumping overboard. Enslaved people did what they could to develop their own cultural traditions and ways of coping with the horrors of slavery, even on the slave ships. In the Americas, enslaved Africans often remembered their ‘shipmates’ with fondness, treating the people they had experienced the trauma of being trafficked with as though they were related by blood.European Abolitionist campaigns helped end the transatlantic slave trade during the nineteenth century. The British ended their slave trade in 1807 and phased out slavery in the British empire during the 1830s, turning their attention to suppressing the slaving activities of other powers. Transatlantic slave trading ended in the middle of the nineteenth century, but the institution of slavery lasted longer. In the United States, slavery came to an end as a result of the American Civil War during the 1860s, and the institution survived in Cuba and in Brazil until the 1880s.Dr Christer Petley – Senior lecturer in History at University of Southampton
© University of Southampton, 2017

Hi there! We hope you're enjoying our article: The Transatlantic Slave trade
This article is part of our course: Shipwrecks and Submerged Worlds: Maritime Archaeology