Engaging in international trade can be daunting, but it offers significant opportunities for SMEs. 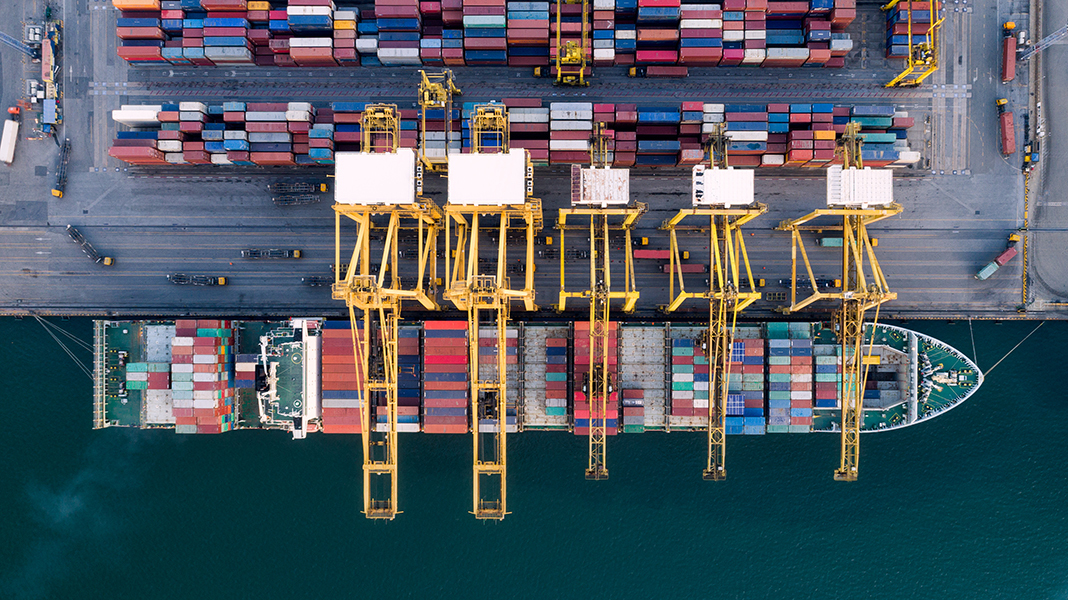 Engaging in international trade can be daunting, but it offers significant opportunities for SMEs. This article was written by Jon Berry, Senior Consultant, ITS Global for this Deakin University FutureLearn course.Australian research has found that companies that trade internationally grow faster, employ more people and pay higher wages than those that don’t, so engaging in international trade is good for companies, good for workers and good for the broader economy.

Global trade flows have recorded some impressive gains recently, following two years of contraction. According to the World Trade Organisation (WTO), total goods and services exports from WTO member states in 2017 were worth US$17.4 trillion and US$5.2 trillion respectively.

The total value of goods exported globally has been relatively flat for the past five years, with the exception of 2015, which saw a drop of over 10% in value (even while volumes remained steady) and 2017, which brought an increase of 11% in value and 5% in volume. However, this period of fluctuation follows more than 50 years of exponential growth (see table below for details). 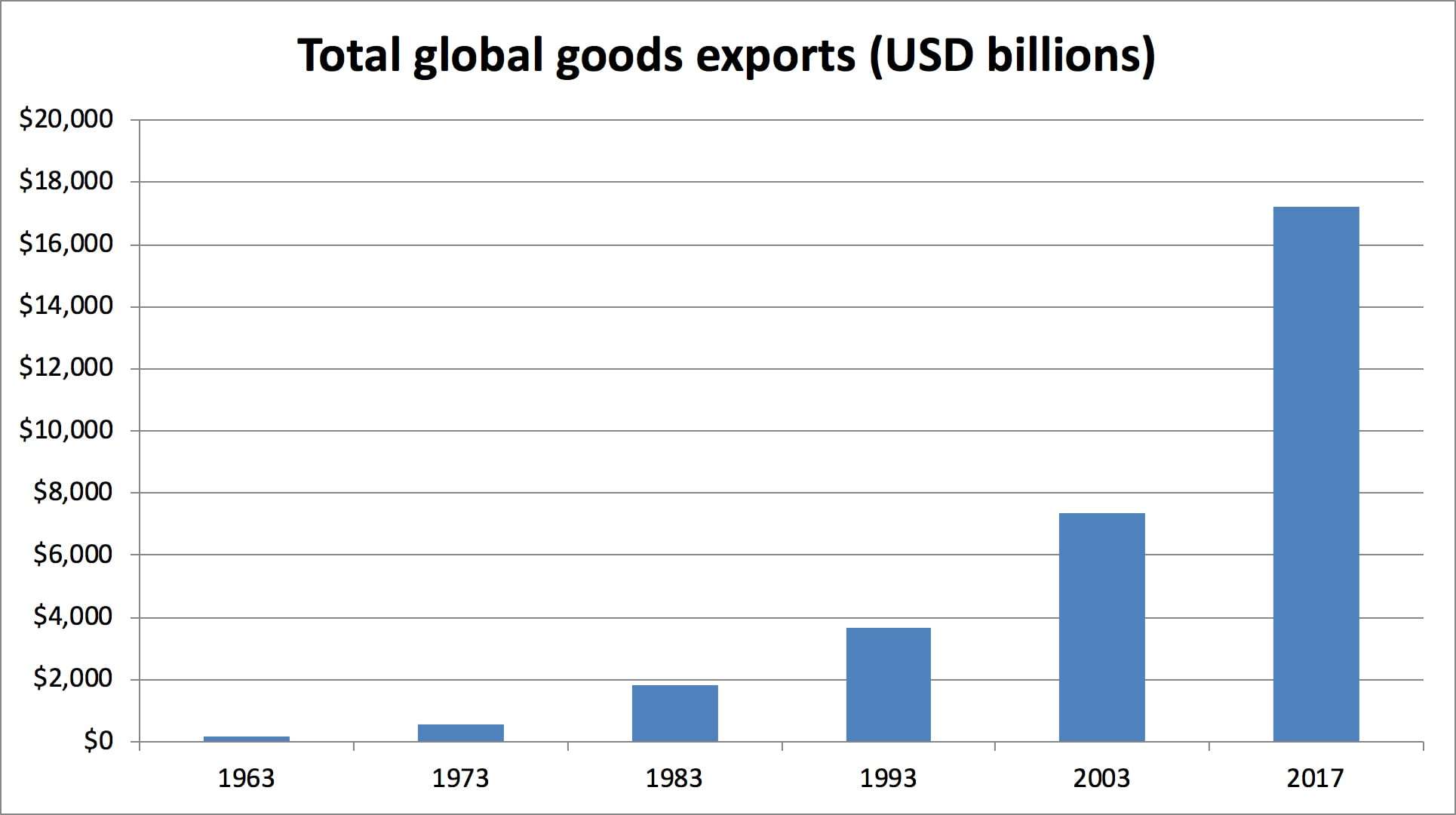 Select the image to open the accessible pdf version
Based on data from: World Trade Organisation 2018, World Trade Statistical Review 2018, Table A4 In 2017, manufactured goods made up 70% of the total value of exported goods. China was the world’s top exporter by value, followed by the USA and Germany. The same three countries were the world’s top importers, with the US followed by China and then Germany (WTO 2018).

View Course
In 2017, the total value of global trade in services increased by 8%. Of particular interest to research firms and technology companies, exports of intellectual property grew by 10% in 2017 alone (WTO 2018). The world’s top services exporters are the United States, the United Kingdom and Germany. See the chart below for a breakdown of services exports by category. 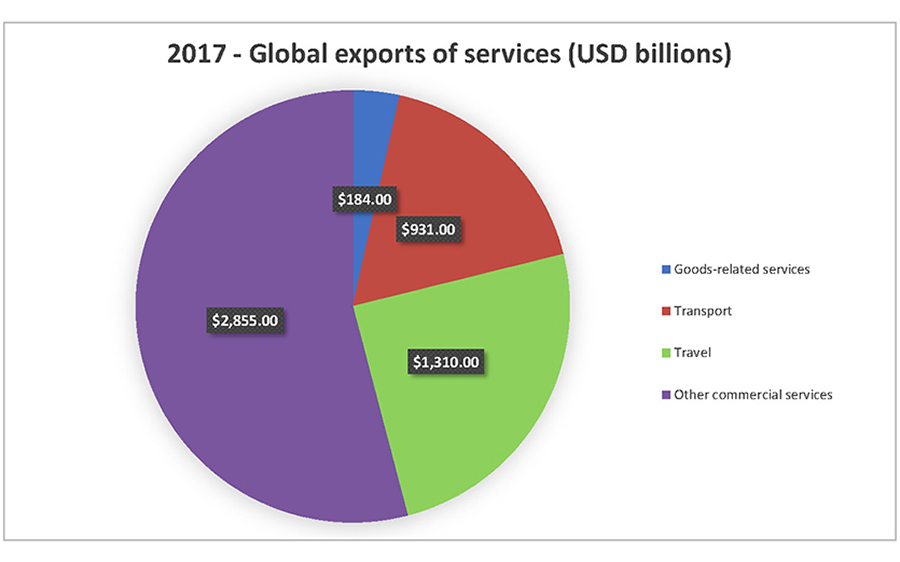 Select the image to open the accessible pdf version
Based on data from: World Trade Organisation 2018, World Trade Statistical Review 2018, Table A24

The total value of e-commerce exports was US27.7 trillion in 2016, up by 44% since 2012 (WTO 2018). The vast majority (86%) of this trade takes place between businesses, rather than with final customers. Online platforms such as Alibaba and Amazon have grown exponentially in recent years, linking millions more businesses of all sizes to global networks.SMEs in particular have benefited from the growth of international online sales platforms, as they greatly reduce upfront capital investment that is needed to enter export markets.Rather than incurring fixed costs to invest in transport and distribution networks and stand-alone advertising, small producers can pay on a per-sale basis for an off-the-shelf solution from Alibaba, Amazon or a host of other platforms. This allows companies to test overseas jurisdictions to see which may be prospective markets for their products.

Many manufactured goods are now ‘Made in the World’, with components sourced from multiple different countries being included in final products. The WTO points out that only 32% of the total value of world automobile exports is actually added by the automobile manufacturing sector.The rest comes from primary industries (the source of raw materials such as iron ore and rare earths), other manufacturing industries (which provide glass, computer chips, textiles, etc) and fully 40% of the value of finished automobile exports comes from services companies, including transport providers, banks, insurers, accommodation providers and IT services companies.SMEs have increasing opportunities to plug into these global value chains (GVCs) by specialising in producing the one component – or component service – that they do best.

Major bilateral and regional free trade agreements (FTAs) continue to be negotiated and signed, delivering new opportunities for SMEs in many different countries. FTAs include improved access for a variety of goods and services, as well as commitments to address behind the border obstacles to trade.A major benefit of FTAs from the point of view of prospective exporters is that they establish government-to-government forums for addressing technical barriers to trade that can hamper market access.For example, companies that find that their goods are frequently held up at the border, or who struggle to meet local licensing requirements for service delivery, can raise these problems with their own governments, which can then utilise the government-to-government forums to push for improvement.

Barriers to trade for SMEs

Despite the improvements in access to global markets for SMEs that are outlined above, challenges remain. The Export Council of Australia (ECA) has identified the following factors that inhibit SMEs from engaging in trade:(ECA 2018, p.6)Many of these issues are currently being tackled by national governments in different parts of the world. Others can be addressed by businesses themselves. However, the most fruitful approach is likely to be cooperation and ongoing dialogue between businesses and government bodies.

The article explains how trade can be good for business. How is this the case for your SME, or an SME with which you’re familiar?If you were to begin trading in a new market, share in the comments which market that would be, whether you’d be trading in goods or services, who your likely customers might be and the obstacles you might need to overcome. How could you overcome those obstacles?
© Deakin University

Hi there! We hope you're enjoying our article: International trade: growing opportunities for small and medium-sized enterprises
This article is part of our course: SMEs and New Markets: Trade, the Chinese Powerhouse and Online Opportunities
close