Find out more
Home / Creative Arts & Media / Design / Teaching Digital Literacy: Videogames in Education / What is computational thinking and how do we develop it?

What is computational thinking and how do we develop it? 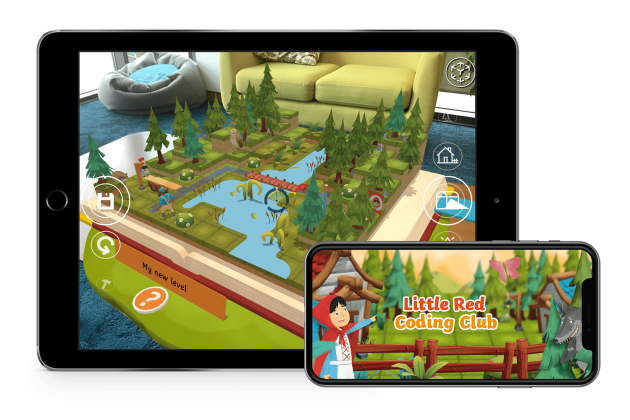 In 2019, I did some work with an app developer – Twinkl Educational Publishing – to evaluate children’s playful learning with an app called Little Red Coding Club.

Little Red Coding Club was the first educational game in the world to use Augmented Reality to support multiple players across multiple devices. The app’s based around the children’s fairy tale, Little Red Riding Hood. Working individually or in groups, children use a mobile device to guide characters including Little Red Riding Hood through a forest to reach Grandma’s house. Augmented Reality brings the 3D forest to life. This forest can be explored by physically moving the device in any direction.

Children can choose between ‘Play’ and ‘Create’ modes. The ‘Play’ mode prompts children to scan their physical environment with their device, enabling the placement of an AR game board. A story book then appears, offering ten game levels. When children select a level, a short introductory video presents the necessary information to complete the corresponding level.

They’re then prompted to press (or drag and drop) directional commands to create a sequence used to direct two characters on the game board: Little Red Riding Hood and The Woodcutter. In the game’s ‘Create’ mode, children are provided with a blank game board on which they can create their own (playable) level from scratch. A variety of components are available to be dragged and dropped, including the same characters, buildings, decorations and landscape features.

At the start of the project, Professor Jackie Marsh and I did a rapid literature review to generate some initial understanding of the types of early coding skills and knowledge children have already been shown to develop in relation to a range of digital coding and computational thinking activities. In doing this, we aimed to create a simple framework that valued what children were already doing and to make these skills and knowledge explicit and observable for researchers and educators.

We found that existing research suggested that a range of skills and knowledge were evident in young children’s engagement with digital technologies, including tangible coding technologies or robots, tablet apps and computer programmes:

These 11 skills were used as the foundation of our Early Coding Skills and Knowledge Framework. We used that framework to evaluate children’s playful learning with Twinkl’s app. We also used The University of Sheffield’s Makerspace Learning Assessment Framework to look at other aspects of learning, including creativity, critical thinking and social learning.

Thirty children aged between 4 and 6 took part. We video recorded the children playing with the app in small groups in early years settings. They were given some light support from either a research assistant or an early years educator.

We found that children playing with the app exhibited all of the characteristics of effective learning, indicating that children played and explored, learned actively, thought critically, displayed creativity and design skills and learned socially.

In addition, all of the early coding skills and knowledge types were observed, with the exception of the last one – the ability to identify loops. At the time we carried out the research, the app didn’t let children do this, but following the project, this feature was added to the app.

Beyond this, I’m going to talk about two findings that I think are particularly interesting and important.

Firstly, the app’s two modes seemed to encourage slightly different types of play and support the development of different skills. For example, when they played in ‘Create’ mode, children were more likely to explore materials, use materials imaginatively and demonstrate curiosity and imagination.

Meanwhile, when they played in ‘Play’ mode, they were more likely to exhibit some of the coding skills and knowledge types, including defining algorithms and sequencing. These findings connect with previous work that suggests apps are more likely to foster creativity when they’re more open-ended and allow children to develop their own texts or artefacts.

However, it was also observed that the children began to engage in these more creative behaviours once they’d gained a level of confidence in the basic coding competencies. Children’s imaginative play and oral storytelling in relation to the game also incorporated aspects of their new found coding knowledge.

When learning coding skills and knowledge in a digital context, then, children seem to be enabled to be creative when equipped with both technical understanding of conventions of coding and provided with contexts conducive to ‘freeplay’ and the production of their own digital creations.

The study thus emphasises that the inclusion of coding and computational thinking in early childhood education might not just be valuable in terms of learning a particular defined skillset, but also in terms of making possible particular forms of creativity and creative thinking.

Secondly, we found that children only suggested improvements in the game when an adult provided appropriate support.

This aspect of critical thinking is perhaps something that’s more difficult to support in a digital game and emphasises the importance of some adult engagement with children’s digital play.

So, young children can learn to code by playing digital games! And, maybe, these early findings around creativity point to the value of that beyond just being able to code. I think more research is needed and I’m excited to see what we find next.

What are your thoughts?