Follow along with Rohima Crook in this video to explore the ScratchJr programming environment and create your first program
View transcript
2.6
ScratchJr is designed for young children aged five to seven to learn early programming concepts. It’s a block-based programming environment where young children can solve problems, design projects, and be creative. Follow the links in the article below to download the ScratchJr app on Apple, Android, or your desktop. The ScratchJr website also features a range of activities and support to help your learners create simple programs and build their confidence at a manageable pace. Download the software, and try out ScratchJr for yourself. Explore some of the key features, and follow along to create a simple rocket program.
49
Click the Blue button to open up a new project. This is the stage area which acts as a background for your projects. You can add a background by clicking the central landscape icon. Let’s choose the moon background.
66.3
These characters, known as sprites, can be added to the stage and programd using these coding blocks. Let’s delete the initial sprite by clicking and holding the sprite, then tap the red cross.
81
You can add a rocket sprite by clicking on the blue Add icon on the left-hand side, scroll down, choose a sprite from the menu, and then click the tick. Now the rocket sprite is on the stage. To program the rocket, you’ll need to snap coding blocks together in the right order. So click the yellow icon, and then drag starting green flag into the programming area. Then, add a blue Move Up block, and end with a red End block. When you’re done, click the Green Flag to run your program. It didn’t move very far, so try changing the number under the blue arrow. Let’s try 10. Click the Green Flag again.
127.2
And now, we can see that the rocket travels much further. Once you’ve introduced the key features of ScratchJr to your learners, what challenges could you set to structure their exploration of the other blue Motion blocks? Share your thoughts with us in the comments section.

ScratchJr is designed for children aged 5 to 7 to learn early programming concepts. It is a block-based programming environment where young children can solve problems, design projects, and be creative. Children use blocks or sequences of blocks to control the behaviours of characters (sprites) and backgrounds displayed on screen. ScratchJr is available as an Android app and an Apple app. A desktop version of ScratchJr is also available.

When you introduce a new programming environment to young learners, go through the features at a pace that is suitable for them so that they do not feel overwhelmed. Cognitive load is a stress on a learner’s working memory, reducing their ability to acquire new knowledge. To reduce the cognitive load on your learners, you can teach the many aspects of ScratchJr gradually, allowing learners to build on their knowledge lesson by lesson. 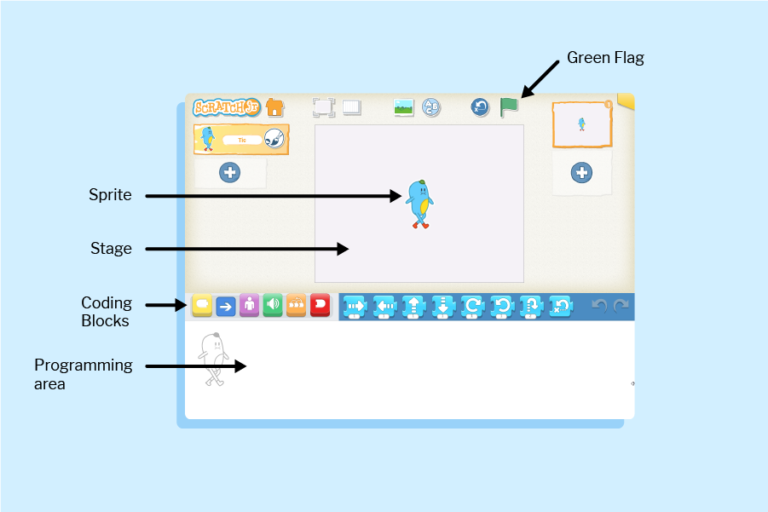 There are many other aspects to the interface which you can introduce to your learners as they become more familiar with the environment. However, these key features should be all they need to know to start creating their own programs.

Creating a program in ScratchJr

As your learners become more familiar with the interface, you can start to introduce the coding blocks that are available in ScratchJr. Start by introducing them to single blocks, and as they become more confident, show learners how to join multiple blocks together to create simple programs.

There is support available on the ScratchJr website including a description of what each of the blocks does. Initially, we suggest you introduce learners to a small selection of blocks and then encourage them to build up their knowledge of the different blocks available at a manageable pace.

There are also activities on the ScratchJr website which you can use to familiarise yourself with the possibilities of ScratchJr or share with your learners to show them how to create simple programs.

Try out ScratchJr for yourself by making a program which will send a rocket upwards on the screen.

Click on the blue addition button to open up a new ScratchJr project.

Delete the initial sprite by clicking and holding the sprite then tapping on the red cross.

Next, add a rocket sprite. To add a new sprite, click on the blue add button on the left-hand side and choose a sprite from the menu — click on the tick to add the rocket on to the Stage.

You can add backgrounds in a similar way by clicking on the central grass/sky icon. Select the ‘Moon’ background.

To program the rocket, you will need to drag the following blocks down into the programming area in order, and snap them together:

Click on the green flag at the top right of the screen to run your program.

Tap on the number underneath the blue up arrow in your program and type in a larger number. Click on the green flag to run your program. Your rocket will travel further.

Once you’ve introduced the key features of the ScratchJr programming environment to your learners, what challenges would you set for them to structure their exploration of the other blue (motion) blocks?

Add your suggestions in the comments below.