Find out more
Home / Healthcare & Medicine / Agriculture / The Resistant Mosquito: Staying Ahead of the Game in the Fight against Malaria / Sources of selection pressure

Read Sebastian Horstmann describing the various sources of selection pressure on malaria mosquitoes for insecticide resistance.
© University of Basel
The development of resistance against commonly used insecticides is a major threat to our ability to control the mosquito vectors of disease.

Only few insecticide mode of action classes are available for vector control, so it is crucial that their effectiveness is maintained so they can continue to deliver a public health benefit.

The origin and frequency of insecticide resistance mechanisms in an insect population is an adaptive process driven by natural selection.

The main sources of selection pressure are the vector control interventions themselves, e.g. insecticide-treated nets, larvicides and indoor residual sprays. However, there can only be selection if a proportion of the mosquito population exposed to the insecticide survives and reproduces. This is most likely to occur when the effectiveness of an intervention starts to decrease, and the mosquitoes are exposed to declining doses of the insecticide. This is particularly the case if sub-standard products are used, or if sprays are underdosed or poorly applied.

Besides insecticide exposure aimed at mosquito control, mosquitoes may also experience selection from other sources. Agriculture and household insecticide use, urban and industrial pollution, exposure to natural xenobiotics and interactions with pathogens, can all provide such selection pressure.

In agricultural settings, many insecticides belong to the same mode of action classes as those used in vector control. In some cases, it is the exact same insecticide that is used to control agricultural and public health pests. Additionally, non-insecticide agricultural products like fertilisers, herbicides or fungicides can also apply selection. Poupardin et al. for example described that Aedes aegypti larvae exposed to sub-lethal levels of xenobiotics, like copper-sulphate, showed an increased tolerance to the pyrethroid insecticide permethrin. It was found that this was due to increased levels of enzymes that could also metabolise insecticides.

Irrigated crops and paddy rice provide particular exposure, as the bodies of water that the mosquito larvae live in are so closely associated with the crop. An extensive study undertaken by David et al. (2010) showed that genes allowing the mosquito larvae to survive exposure to herbicides, insecticides and fungicides in agricultural settings, also made them less susceptible to the insecticides used in vector control. Increased levels of detoxifying enzymes and changes to the mosquito’s cuticle were observed. Where possible, agricultural land should be managed in such a way as to minimise the opportunity for mosquitoes to successfully breed in it, reducing selection pressure from this source.

The use of household insecticides by individuals can also select for insecticide resistance, especially in more urbanised areas. For example, mosquito-coils, vaporizers or aerosols are readily available and often contain insecticides from the same mode of action classes as the vector control interventions. These also carry a risk of incorrect use, which can add further risk of selection.

Selection via exposure to pollution

Domestic and industrial pollution can be found in many water bodies that are used as breeding sites by mosquitoes. Pollutants can include polycyclic aromatic hydrocarbons (PAHs), polychlorinated biphenyls (PCBs), dioxins, etc., as well as heavy metals such as lead, mercury or cadmium.

In addition, residues of human life may also be present, for example, synthetic food additives, hormone derivatives, and pharmaceuticals. Mosquito larvae that develop in such polluted water bodies need increased detoxification enzymes or protective cuticle layers to survive, and such mechanisms may also protect them from insecticides. Even if the mosquitoes are not directly killed, in a population exposed to the pollutants, any mosquitoes that are less affected will have more offspring and will come to predominate in future generations.

There is also some evidence that mosquitoes infected with the malaria parasite have modified detoxification enzymes, which might also actually offer some degree of insecticide resistance.

Mosquitoes can’t avoid interacting with natural chemicals in the environment, but due to human activity, they may also be exposed to a wide range of synthetic chemicals – either by deliberate design, such as in vector control, or due to other activities and pollution. As both routes can select for insecticide resistance, the non-vector control exposure should be minimised as much as possible to reduce the overall selection pressure that mosquitoes experience. 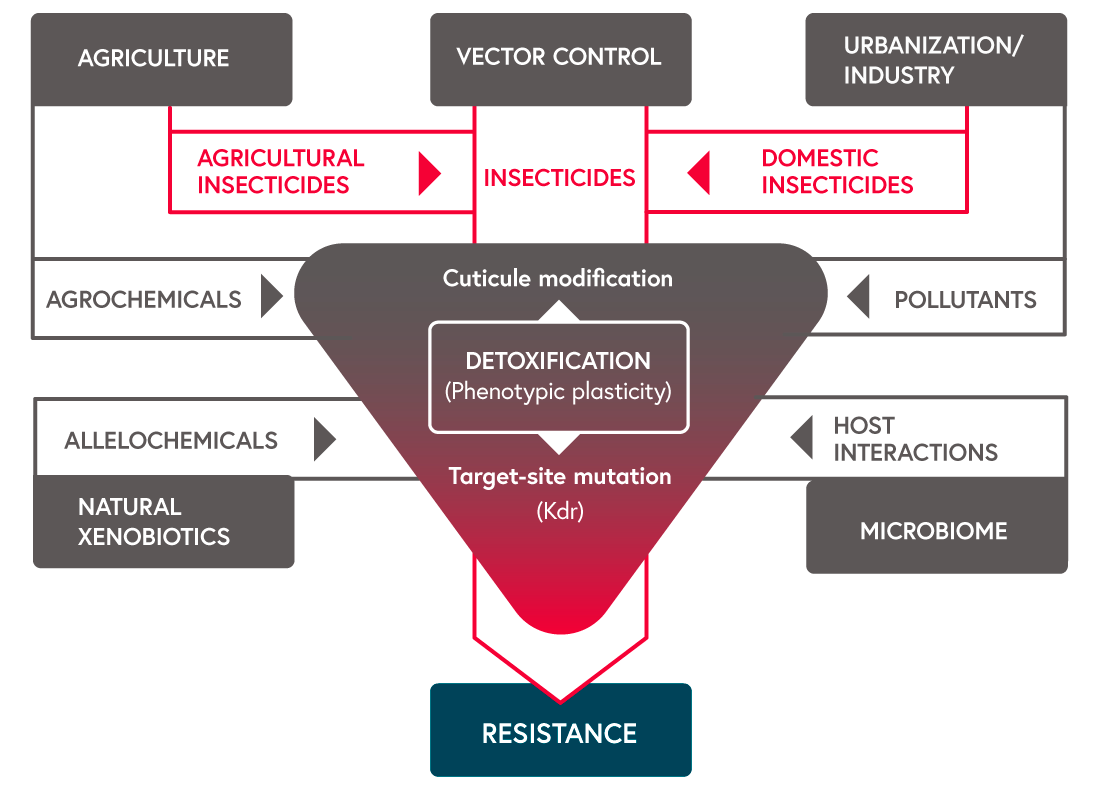 For this article, the following publications were used and allow a deeper insight and further reading: