Read Ian Hastings describe some of the theory behind Insecticide Resistance Management approaches.
© University of Basel
Most organisms evolve resistance to the agents used to try and control them. The malaria parasite evolves resistance to drugs, bacteria to antibiotics, weeds to herbicide, and so on.

Mosquitoes are no exception and readily evolve insecticide resistance (IR) in response to control efforts, directly from public health, and indirectly from agriculture. The paradigm is essentially “use it and lose it”, in which we accept that the evolution of IR is probably inevitable. But we can identify insecticide deployment and resistance management (IRM) strategies which slow its development and spread. The aim is to optimise the insecticides’ long-term effectiveness and utility in public health.

The most important factor slowing IR development is that insecticides should be deployed at their correct concentration or application rate. Resistance occurs when sensitive mosquitoes are killed when they meet the insecticide, while resistant forms survive. That is, there is differential survival of sensitive and resistant forms.

This has become known as the ‘selective window’, which drives the spread of IR and is illustrated on Figure 1 below. The clear recommendation is that National Malaria Programmes (NMPs) should ensure that insecticides are applied correctly using good quality (PQ-listed) products and should be maintained at high concentrations. Malaria control programmes need to regularly replace ageing insecticide-treated nets and ensure that regular indoor residual spraying occurs to maintain high concentrations on treated walls.

Recall that it takes a significant amount of time, ten days under optimal conditions, but often much longer, for the malaria parasite to develop within the mosquito and become infective to the next human she bites. This is known as the extrinsic incubation period.

The effect is best illustrated by an example. Suppose an immediate-kill insecticide is deployed in a region, and sensitive mosquitoes lay an average of one egg brood while resistant forms lay an average of five broods: resistance has a five-fold selective advantage.

Now suppose a late-killing insecticide was deployed and sensitive mosquitoes now lay an average of three egg broods while resistant forms continue to lay five broods. This late-acting insecticide still blocks malaria transmission by killing mosquitoes before the malaria parasites have completed their extrinsic incubation. However, selection for resistance has now been substantially reduced to 5/3 or 1.67-fold. There are currently no PQ-listed true late-killing insecticides; however, researchers are pursuing the opportunity.

The best defence against the evolution of resistance is therefore to deploy good-quality insecticides at high concentrations that can reliably kill both sensitive and resistant mosquitoes, reducing differential survival and selection for resistance. Once this has been achieved, it is possible to consider further insecticide resistant management (IRM) strategies, briefly summarised below:

Finally, note that most previous modelling of IR has assumed it is encoded by a single gene such as the kdr (knockdown resistance) mutation that provides resistance to pyrethroids and DDT. The reality is that IR is a quantitative trait encoded by a large number of genes (such as human height) which varies continuously in the population. The effects of these different genetics on the dynamics of IR is the subject of current research.

Figure 1: Anopheles mosquito mortality over time since spraying of experimental huts in Benin 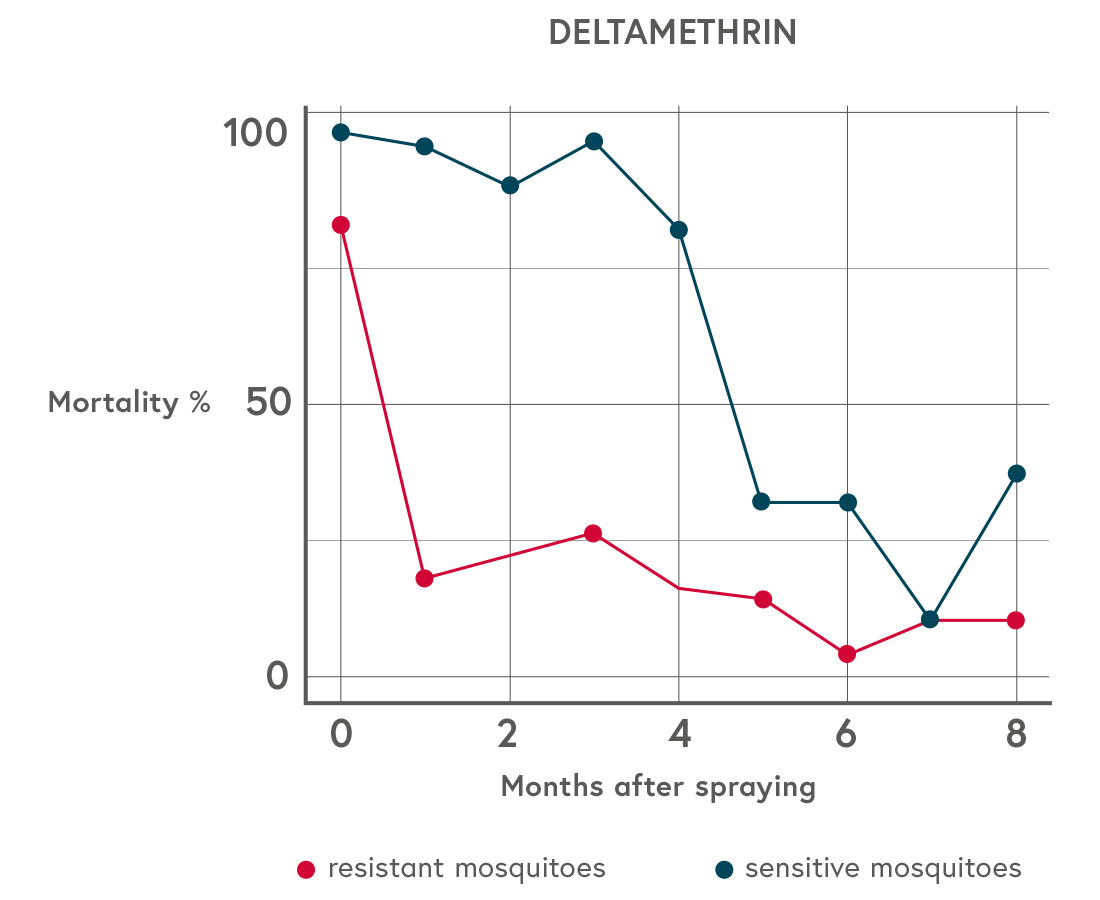 At time zero there is little difference in mortality (most mosquitoes are killed), and again by month seven there is very little difference in mortality (most mosquitoes survive). The intermediate times at 1 to 6 months show very strong differential survival between sensitive and resistant mosquitoes, which is a potent force driving the evolution of insecticide resistance. (Adapted from The role of windows of selection and windows of dominance in the evolution of insecticide resistance in human disease vectors, page 745 (see References below). CC BY 4.0.)

South A, Lees R, Garrod G, Carson J, Malone D, Hastings I. The role of windows of selection and windows of dominance in the evolution of insecticide resistance in human disease vectors. Evol Appl. 2019 Dec 10;13(4):738-751.