An Introduction to Islamic Psychology

To understand a uniquely Islamic theoretical framework for an Islamic psychology we must first understand at a foundational level how human beings are conceptualised within the cosmology that characterises the Islamic tradition.

This article is written by Dr Abdallah Rothman, Professor of Islamic Psychology and Principal at Cambridge Muslim College.

The understanding of human nature and the relative conception of structural aspects that make up the human psyche or ‘‘soul’’ determine much of how we make sense of behaviour and motivation and are fundamental to the philosophical underpinnings of theoretical approaches to psychology and psychotherapy. It is inappropriate to adopt the theoretical orientations that underpin contemporary Western psychology because most of these have been influenced by concepts of human nature other than those derived from Islam.

In attempting to understand an Islamic perspective of psychology a range of perspectives is necessary due to the variety of interpretations and definitions of Islam, as well as the numerous branches of knowledge within the Islamic tradition that offer critical insight into and explanation of relevant teachings and concepts in regard to human psychology. The following explanation of Islamic psychology draws on a variety of sources and perspectives to present a framework for Islamic psychology. The concepts and principles that make up the framework are based on tafsir (exegesis) of the Qur’an and hadith as well as drawing upon writings of both modern and early scholars of Islamic theology and philosophy. Although diverse insights are found in different branches of knowledge and variations in interpretation are apparent, there is a general consensus about the distinct foundational elements of an Islamic conception of the soul.

An Islamic Model of the Soul

According to this Islamic model, the human soul has an innately pure and good nature, fitrah, that comes from and is connected to God but that becomes covered over and forgotten as a natural part of life in the dunya (temporal world). Throughout its life in the dunya, within the soul there exists a dynamic interplay of conflicting forces that affect the psychological state of the person and determine relative levels of alignment or misalignment with fitrah. This process is represented by the purple elements in the middle of the model in Fig. 1. 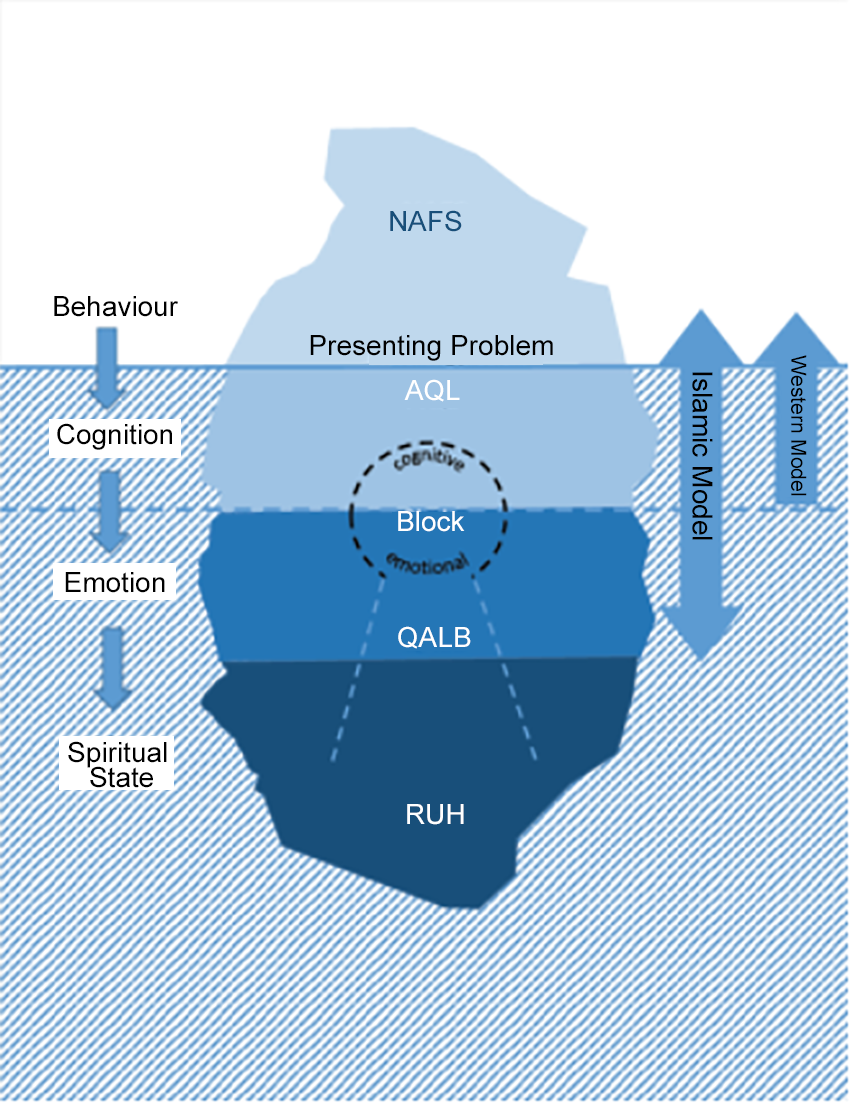 Fig. 1. An Islamic model of the soul

The qalb (heart), which is the spiritual centre of the person, and where the faculty of intellect is located as the aql, has the potential to turn in either of two directions which shapes the relative, transient outcome of this conflict. It can turn toward the lower impulses of the nafs (lower self) and become further misaligned with fitrah (innate pure nature) by the influences of the dunya and shaytan (the devil), resulting in increased negative characteristics of the muhlikat (vices) and a state of ghafla (forgetfulness of God). This process is represented by the red elements toward the bottom half of the model in Fig. 1, from the nafs downward. Or it can turn toward the higher, Godly nature of the ruh (spirit) with the remembrance of God and the akhirah (afterlife), resulting in increased positive characteristics of the munjiyat (virtues), and come more in alignment with the soul’s state of fitrah. This process is represented by the blue elements toward the top half of the model in Fig. 1, from the ruh upwards.

The relative state of the soul in relation to either of these two poles at any one time is articulated in three distinct stages of the soul’s development throughout life in the dunya, namely: nafs al ammarah bil su (soul that inclines to evil), nafs al lawwama (self reproaching soul), and nafs al mutmainah (soul at rest). The model posits that the soul has an inherent inclination toward growth and an upward trajectory in relation to this model, due to its primordial nature of knowing God, and that the Islamic tradition, as guided by the Qur’an and Sunnah, encourages and maps out a path for the human being to pursue this trajectory. This is demonstrated in the description of processes along the path that act as mechanisms for exerting effort in the dynamic interplay within the soul as it struggles between the two opposing forces, namely jihad an nafs (struggle of the soul) , tahdhib al akhlaq (refinement of character), and tazkiyat an nafs (purification of the soul).

The Islamic model of the soul presented here possesses several features that distinguish it from most secular Western models of human nature and psychology. The notion that the spiritual centre of the human being is the heart is a significant distinction, together with the contention that the intellect and consciousness are located in this heart centre rather than in the brain, as most psychological theories posit. Furthermore, the idea that this center of consciousness within the human being is inherently connected and can be consciously connected to a primordial, divine consciousness is absent from Western, secular theories of human nature. The concept of the ruh as a point of access within the person which can directly receive guidance and/or healing from God and the utilisation or lack of acknowledgement of this aspect within psychotherapy could have a significant impact on therapeutic guidance and treatment goals for Muslim clients.

These, along with other crucial conceptual differences suggest the need for more than just Islamically adapted or integrated approaches to psychotherapy. They substantiate the necessity of a unique framework grounded in an Islamic paradigm, as represented by this model and any theory of Islamic psychology of which it is a foundational constituent. Building upon this model, the three aspects identified here that collectively form a mechanism for the development of the soul (tazkiyat an nafs, tahdhib al akhlaq, and jihad an nafs) have particular relevance to application in Islamic psychotherapy.

Thinking back over the last two steps, think about one point of difference and one point of similarity between Islamic and Western conceptualisations of mental health? Share your ideas below. Take a look at the other comments and see if there is someone who shares your ideas, let them know you agree.