In many parts of the world, including the United Kingdom, Muslims face significant challenges and crises that potentially carry implications for mental health, ranging from the experience of trauma in war-torn countries to the repercussions of Islamophobia in contexts where Muslims are a socially devalued minority.

Yet many religiously committed Muslims do not seek psychotherapeutic services because of (often legitimate) assumptions that psychotherapists will not engage with their religious values in an informed and open way. In light of this, an approach to psychotherapy is needed that explicitly values Muslims’ religious orientations and commitments and integrates these into clinical practice.

Many of the fundamental notions that inform the dominant discourse within contemporary secular psychology and psychotherapies are distinctly different from those of the Islamic paradigm: understandings of the nature of humankind, the purpose and meaning of existence, and the person’s developmental trajectory. If therapists are working from within conceptualisations of the person and treatment goals that characterise the dominant, secular way of understanding and practising psychology, they may be undermining fundamental Islamic principles, ethics, or even laws. Simply ‘Islamicising’ Western secular psychology and psychotherapies (that is, modifying core concepts within Western secular approaches to try to accommodate Islamic values and commitments) can only go so far in speaking to the life world of religiously committed Muslims and engaging with this client group in a deep, holistic way. There is a need for a different psychology and psychotherapy rooted in a model of the person derived from Islamic theology, philosophy, ethics, and guidance. Such an undertaking is a matter of radically respecting and honouring clients’ religious beliefs and commitments and acknowledging the potential for healing and growth that exists within their religious framework.

Building on the presentation of the Islamic model of the person or ‘soul’, presented in the previous article, what follows is a discussion of how that model is applied in practical applications in the familiar language of psychology and psychotherapeutic interventions.

Figure 1 presents an Islamic model of psychotherapy (including the four levels of the soul) as an iceberg. The nafs (lower self) level appears ‘above the waterline’, that is, where most of the clients’ presenting problems manifest. This can show up in cases explicitly as behaviour-oriented patterns or more subtly as personality patterns where a person might be struggling with either of the stages of nafs al amara bil su (‘soul that inclines to evil’) or nafs al lawwama, (‘self-reproaching soul’) or vacillating between the two. Thus, what is ‘visible’ within the client’s presentation is generally considered mostly to be symptomatic of imbalances or blockages at one of the other levels of the soul, further down the iceberg beneath ‘the waterline’. Interventions at this level are mostly behavioural in nature and may include reconditioning responses, lifestyle changes, and religious ritual practices, for example. 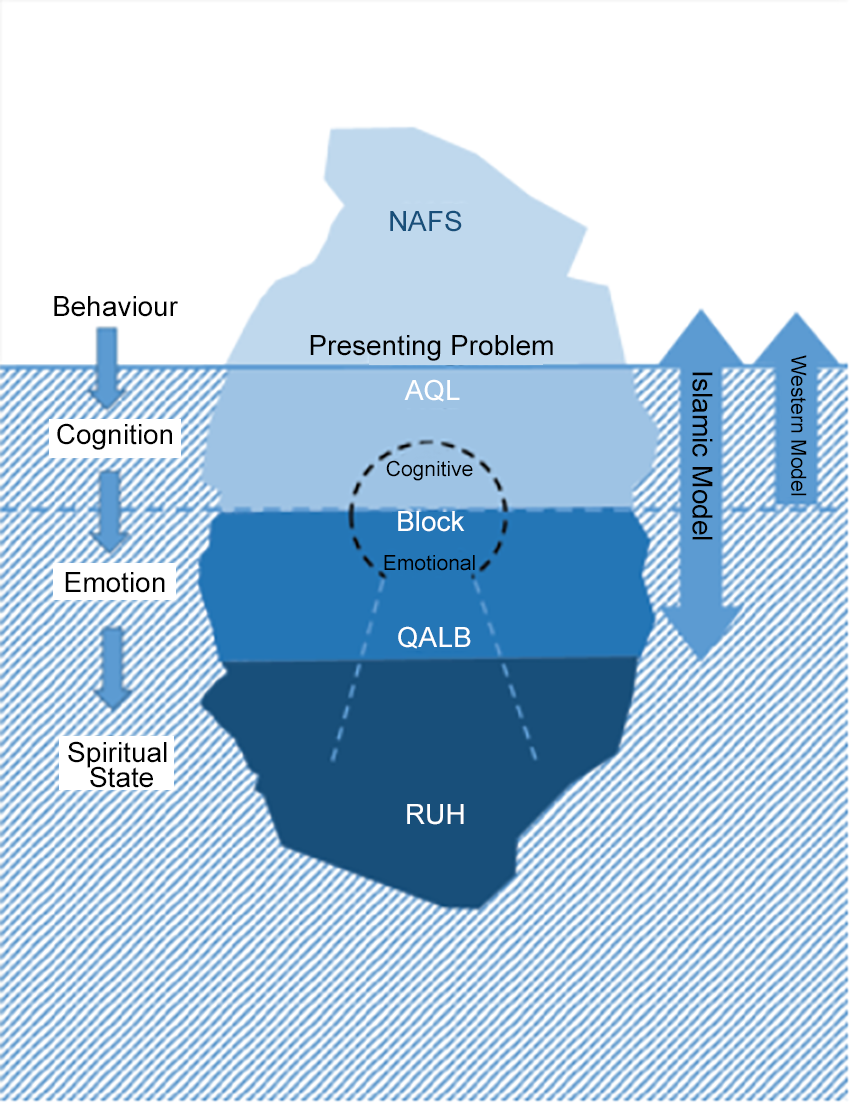 Just underneath the waterline is where the level of aql (intellect) is located, where cognitions that are attached to a problematic behaviour or personality pattern cause and maintain that maladaptive behaviour or pattern. This is where cognitive behavioural therapy can exert its effects to help reframe and reprogramme these dysfunctional cognitions. Models of psychotherapy within the secular Western psychological paradigm tend to focus on or only extend as far as the level of the aql. An unwillingness to move routinely beyond that level may be attributed to the limited scope of the model within which a therapist has been trained and a lack of understanding of and confidence in how to deal appropriately with deeper levels. Muslim therapists who believe they work within an Islamic framework may experience that reticence too if they believe they lack the knowledge or frameworks to move to deeper levels.

Although therapeutic interventions at the aql level may engage cognitive aspects of blocks to the fitrah or higher spiritual self, they largely do not engage the deeper emotional material that is connected to or causes these blockages and that is found at the level of the qalb (heart). Those therapists who understand how to engage the qalb in therapeutic interventions do so by accessing the emotions and unlocking the block to the fitrah (innately pure disposition) self. This may be done through somatic experiencing techniques to orient the client toward an embodied experience of the self, or Islamic contemplative practices such as muhasabah (self-introspection), tafakkur (contemplation), and/or muraqabah (watchfulness of the self/meditation). This removal or opening of blockages happens at the level of the qalb. As this particular model contends, that is where the key to an Islamic psychotherapy is held to lie, represented by the keyhole shape in the centre of Figure 1. The bottom part of the keyhole represents the opening to the ruh (spirit), which is thought to happen as a result of removing the emotional block that was keeping the person from living in closer alignment with their fitrah state, in remembrance of God and their primordial state.

The deepest part of the iceberg is that aspect which is held to be shrouded in mystery: the ruh, the pure soul which reflects the truth of God. It is thought that there is a limit to how much can be delved into at that depth within the context of psychotherapy. Psychotherapists may engage the ruh by integrating into therapy or assigning Islamic spiritual practices of dhikr (remembrance of God) or ibadah (worship). Further exploration of this level of the iceberg is assumed to lie in the domain of a shaykh (spiritual guide) who has charted such deep waters and has attained a rare, higher spiritual state with which comes greater knowledge of the soul. This is the point where the continuation of jihad an nafs (struggle of the soul), tazkiyat an nafs (purification of the soul), and tahdhib al akhlaq (refinement of character), all processes along the path towards growth of the soul, departs from the realm of psychology, which is mostly concerned with bringing one’s nafs into equilibrium or more optimal functioning, and crosses into a purely spiritual pursuit which is more concerned with perfecting the nafs (see Rothman & Coyle, 2021 for further exploration of this).

The iceberg model presented here offers insight into a general clinical framework from which interventions can be developed and practiced within Islamic psychotherapy. Given the sensitive nature of the spiritual ramifications of the state of one’s soul from an Islamic perspective, it is important for practitioners operating from within this model to, at the very least, have knowledge and awareness of the Islamic theological paradigm and model of the soul. Due to the religious nature of the pursuit of submission to God within the model of health and wellness, non-Muslim practitioners will be limited in their scope and ability to work fully within this framework. However, it can be useful for non-Muslim mental health practitioners to have an awareness of this model, to inform and adapt their own therapeutic approach within their professional training. Both non-Muslim practitioners as well as Muslims who do not have knowledge and training in the Islamic framework would do well to partner with Islamic religious scholars to help support the mental health needs of their Muslim clients.

Make a note in your reflective diary about whether, how, and why you might consider including this approach as part of your practice so that you are ready to take part in the discussion step which is next.