Find out more
Home Everything you need to know about climate change in the Philippines
Published on August 13th, 2021

We examine how climate change is impacting the Philippines, and what the country intends to do about it. 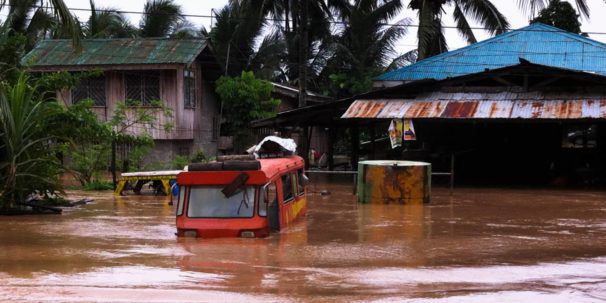 According to a report issued in 2019 by the Institute for Economics and Peace, the Philippines is the country most vulnerable to climate change.  Between 1958 and 2014, the Philippines experienced a 0.62°C increase in yearly average mean temperature, with the rate of change increasing over time. Climate change has resulted in an increase in the amount and intensity of rainfall, with more rainy days observed in recent decades.

High temperatures and heavy rainfall are typical of the Philippines’ humid equatorial climate. The average annual rainfall is 2,348 mm, but this varies greatly by location, ranging from 960 mm in southeast Mindanao to over 4,050 mm in central Luzon.

The year-round average temperature in the Philippines is 24°–27°C, with the hottest month being May and the coldest month being January. Humidity levels average around 82%, due to warm trade winds, lush vegetation and abundant rainfall.

The Philippines is one of the world’s most typhoon-prone regions, averaging 19–20 typhoons annually, with 7–9 making landfall. The Philippines’ sea levels are rising faster than the global average, posing a greater risk of storm surges and threatening the permanent submergence of low-lying areas.

Typhoon season in the Philippines is July-October, when 70% of typhoons develop. The Philippine Atmospheric, Geophysical and Astronomical Services Administration (PAGASA) issues typhoon warnings to the general populace.

The five-year running average indicates that more typhoons occur during El Niño events. El Niño events, which occur every 2–7 years on average, cause less rain and typhoon activity. La Niña events, which are less common, result in heavier rainfall and more typhoon activity. The strongest typhoon in history was super typhoon Haiyan, also known as Yolanda in the Philippines, which had winds of up to 195 mph, killed 6,300 people and displaced millions.

The impacts of climate change in the Philippines

Climate change events including sea level rise, increased frequency of extreme weather events, rising temperatures, and heavy rainfall all pose a threat to the Philippines. This is due to the country’s vulnerability to natural dangers such as typhoons and droughts, reliance on climate-sensitive natural resources, and extensive coastline, which are home to the country’s main cities and most of the population.

Coastal flooding poses the greatest threat to the urban poor, many of whom live in makeshift shelters. Read on to find out more about how climate change will affect the Philippines.

Sea levels in the Philippines are rising at roughly twice the global average rate. When particularly powerful storms, such as Typhoon Haiyan, hit land, the higher sea level contributes to storm surges of up to 15–20 feet.

Storm surges are expected to affect 14% of the total population and 42% of coastal residents. Informal settlements, which make up 45% of the Philippines’ urban population, are particularly at risk from flooding due to precarious infrastructure, limited access to clean water, and a lack of health insurance.

Temperature spikes of 4-5 degrees Celsius above normal have been recorded in Philippine oceans. Warmer waters damage coral reefs, which can lead to a drop in fish populations, jeopardising food security. Research shows that a healthy, undamaged coral reef can sustain a yearly harvest of 15-20 tonnes of reef fish, whereas degraded reefs can only sustain 4-5 tonnes.

Increased rainfall also has a negative impact on agriculture. Rainfall in Tacloban City increased by 257% between 1998 and 2011. More rain will result in more flooding, which could lead to landslides in upland areas.

The failure of fruit trees and the postponement of fruit festivals in Mindanao may be explained by these emerging irregular climate patterns. There has also been a rise in pests and diseases in rice, scale insects in fruit trees, and invasive weeds brought from the uplands to the lowlands by various flood occurrences.

Between 2006 and 2013, the Philippines was hit by 75 disasters – most of which were typhoons, tropical storms and floods, causing $3.8 billion in damage and losses to the agriculture sector. Climate impacts on agriculture are expected to cause an annual GDP loss of up to 2.2 percent by 2100.

In around a quarter of the Philippines’ coastal districts, water quality is affected by saltwater intrusion into coastal aquifers; this is likely to worsen as sea levels rise.

Climate change could impact the Philippines’ energy supply, as well as increasing energy consumption due to increased demand for air conditioning. Hydropower production, which accounts for 20% of the country’s energy supply, is threatened by climate change-related water scarcity.

For example, drought reduced hydropower production by 20% in 2010 compared to the previous year. Other key energy infrastructure, such as the Malampaya offshore natural gas field, is at risk from stronger and more frequent storms.

Effects on the natural environment

Wildfires are becoming more common due to drought conditions, believed to be exacerbated by climate change and El Niño. Between 2000 and 2006, these fires devastated large tracts of forest, totalling around 15,700 hectares. Furthermore, increased temperatures and humidity in these places have been linked to the spread of invasive plants and insects in natural ecosystems.

Heavier rains and rising temperatures both help mosquitos grow and survive; thus, health risks from mosquito-borne diseases including diarrhoea, dengue fever, and malaria are predicted to worsen. Although malaria rates have declined considerably in recent years, dengue epidemics still occur every 3–4 years, and diarrhoea remained the fifth most common cause of death in 2010.

In order to adapt to and mitigate climate change, the Philippines passed the Climate Change Act in 2009, requiring local governments to develop a local climate change action plan, or LCCAP. However, only 160 of 1,700 LGUs had LCCAPs in place as of July 2016.

The Climate Change Commission (CCC) is the principal policy-making organisation on climate change issues, as established by the Philippine Climate Change Act. The CCC announced in April 2021 that, as part of its commitment to the Paris Agreement on Climate Change, it was revising its objective to reduce greenhouse gas emissions by 75% by 2030, up from a target of 70% set four years before.

Climate change policy must address the country’s present reliance on fossil fuels to generate power and run machinery for transportation and manufacturing, and champion sustainability and sustainable development in the Philippines. The Philippines continues to rely largely on thermal power generation: particularly gas-fired, oil-fired and coal-fired plants.

Hydroelectricity production in the country is subject to drought; photovoltaic (solar) electricity generation may be a more suitable alternative. However, increased cloudiness caused by climate change may have an impact on this as well. Biomass from trees, municipal garbage, and crop residue is abundant in the country and is an important source of renewable energy.

What does the future hold?

Neither current nor planned policies are currently sufficient to meet the Philippines’ emissions targets. Increased energy use from transportation and buildings will be the primary source of emissions increases.

According to current forecasts, greenhouse gas emissions will rise, which is incompatible with the Paris Agreement’s targets. The result – as outlined above – would be a decrease in readily available food and water, an increase in natural disasters and the degradation of the natural environment.

The Philippines’ future is currently uncertain. The country faces grave challenges in the form of threats to its environment, industries, and the lives and livelihoods of its people. Both the Filipino government and governments abroad will need to coordinate their efforts to combat the climate crisis through the reduction of emissions and the promotion of renewable energy sources.

The best we can do is to educate ourselves on how best to face these challenges. While it does seem at times that we can do little as individuals, if we arm ourselves with knowledge of the science behind climate change and its effects on people and the environment, we can start to take steps toward positive change, and influence others to do the same.