Skip main navigation
Home Unique Australian animals and where to spot them
Published on August 23rd, 2021

Get to know the country's unique animal species, its most dangerous and deadliest animals and Australia’s conservation efforts to protect its endangered wildlife from extinction. 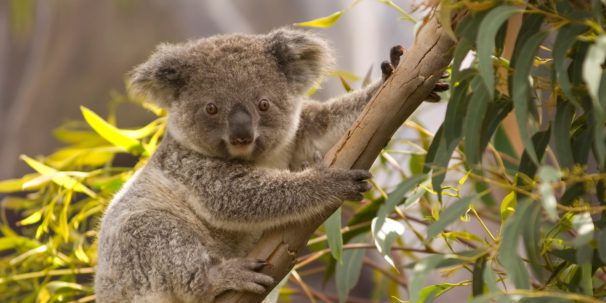 Australia’s most famous native animals are by far its marsupials. Koalas, kangaroos, and wombats are some of the nation’s most globally recognised and loved animals. But did you know that more than 80 per cent of Australia’s mammals, reptiles and frogs are found nowhere else in the world?

We explore the facts around how Australia became home to a wide variety of biologically unique animals, including where you can spot them, either in their wild natural habitat or in animal sanctuaries.

We also look at the most dangerous and deadliest animals found in Australia and how the country’s most endangered animal species are being protected.

An introduction to the Australian ecosystem

Australia has about one million different fauna or native animal species.

More than 80 per cent of the country’s mammals, reptiles and frogs are unique to the Australian natural environment, along with most of its freshwater fish and 70 per cent of its birds.

Australia is home to 140 species of marsupials, including kangaroos, wallabies, koalas, wombats and the Tasmanian Devil, now found only in Tasmania.

The dingo is Australia’s native wild dog and its largest carnivorous mammal.

Of the 828 bird species listed in Australia, about half are found nowhere else, the most popular being the large flightless emu, which stands nearly two metres tall.

Australia has a vast array of waterbirds, seabirds and birds that dwell in open woodlands and forests, including black swans, fairy penguins, kookaburras, and lyrebirds.

There are 55 species of colourful parrots in Australia, and a spectacular variety of cockatoos, rosellas, lorikeets, parakeets, and budgerigars.

In Australia, you can find more species of venomous snakes than any other continent, precisely 21 of the world’s 25 deadliest snakes, plus two species of crocodiles, one saltwater and one freshwater.

Australia is also home to the world’s largest coral reef system, the UNESCO World Heritage-listed Great Barrier Reef. You can learn more about marine environments with our Exploring Our Ocean course.

Distinctive marine species include the predatory great white shark, which grows up to six metres in length; the giant filter-feeding whale shark, which can reach lengths of up to 12 metres; and the box jellyfish, which is one of the most venomous animals in the world.

Why are Australian animals so unique?

Australia’s geographic isolation in the southern hemisphere, which has earned the country the colloquialism “The Land Down Under”, has meant that much of its animals are found nowhere else.

Based on evolutionary history and fossil evidence from about 250 million years ago, the world had just one huge super-continent called Pangaea.

Around 50 million years later, this super-continent broke up into two continents, known as Laurasia and Gondwana. When this separation took place, monotremes and marsupials were the predominant mammals of the Gondwana tropical forest region, while placental mammals evolved in Laurasia.

Then, about 180 million years ago, in the Jurassic Period, the western half of Gondwana, which included Africa and South America, separated from the eastern half which included Madagascar, India, Australia, and Antarctica.

Together, Australia and Antarctica slowly drifted to the southern region and thus became completely isolated from the rest of the world by vast oceans.

Australia finally separated from Antarctica 50 million years ago. As it drifted away from the southern polar region, its climate became warmer and drier, and new species of animals evolved and came to dominate the landscape.

As it turned out, monotremes and marsupials, with their less demanding reproductive systems, were more suitable for this new environment and became the dominant animals in Australia.

The animals which were originally on the Australian landmass no longer had contact with creatures from other parts of the world and so continued to evolve independently.

This separate evolution has resulted in some unusual Australian animals and is the reason why Australian native animals are so different from those found elsewhere in the world.

Native Australian animals and where to find them

Koalas live in eucalyptus tree branches and can sleep up to 18-20 hours a day. While most Australian states prohibit koala cuddles, you can have this once-in-a-lifetime opportunity at three Australian states.

In their natural habitat, you will spot a kangaroo roaming the grassy areas of the bush, on beaches across the Australian coastline, or hopping across the red sand in the iconic Aussie outback plains.

In some wildlife sanctuaries, you may be able to pat and feed them.

Dingos are wild dogs that are found across most of mainland Australia. The best places to spot them are Queensland’s Fraser Island, the Kimberley in Western Australia, and the deserts in Northern Territory and South Australia.

For a personal dingo encounter, just south of Sydney at Symbio Wildlife Park, you can play around with adults and pups. Near Melbourne, you can make a dingo date at the Moonlit Sanctuary.

Wombats may be difficult to spot during the day, as these rotund little creatures emerge at dusk.

In Victoria, the best places to see wombats in the wild is Wilsons Promontory National Park, or at Healesville Sanctuary, where you can touch, pet and pose with the resident wombats; in NSW Kosciuszko National Park or in the wild in Kangaroo Valley at Bendeela Camping and Picnic Area; in QLD Steve Irwin’s Australia Zoo; and in Tasmania Maria Island and Ronny Creek is a fantastic place to spot wombats in their natural habitat.

Australia’s largest native bird, which is flightless and nearly two metres tall, can be found in sclerophyll forests and savanna woodlands. A great place to visit them personally is the Billabong Sanctuary in QLD.

Platypuses love to live in riverbanks and can be very difficult to spot, as they are quite shy. Your best chance to see them is in the wild.

Kookaburras are social birds best known for their distinctive laugh. You can see or hear them in most Australian woodlands.

The best places to visit across Australia include: Taronga Zoo in Sydney; on Kangaroo Island in South Australia; at the Australian Reptile Park, or at Featherdale Wildlife Park in NSW; at Magnetic Island National Park, and Australia Zoo in NSW. All locations have big trees for kookaburras to call their own.

Australia is home to two unique crocodile species, the freshwater and the saltwater crocodile, known as salties.

The Kimberley, Kakadu National Park and Cape York Peninsula in QLD, are excellent places to see crocodiles in their natural habitat.

Rottnest Island’s adorable quokkas are the most photogenic and friendly Australian marsupials to take a photo with as they look like they’re always smiling. Take a mid-to-late afternoon guided tour.

The best place to glimpse Tasmanian devils in the wild is while driving around Tasmania.

Zoos and sanctuaries around the country for a personal encounter with these wild critters are found at Cradle Mountain – Lake St Clair National Park; Devils Cradle; and Tasmanian Devil Unzoo, which offers a 4WD tour on which you track the devil’s movements.

With the most powerful bite of any species, it’s also the largest reptile in the world, known to reach over 1000kg. This protected species mainly eats small reptiles, turtles, fish and wading birds, including taking wild pigs and livestock – cattle and horses.

The three shark species found in Australian waters most likely to attack humans are the Great White, Tiger Sharks and Bull Sharks. In Australia, there has been an average of 16.3 shark attacks a year since 1988.

Known as the most venomous fish in the world, their excellent camouflage capabilities means they’re difficult to notice until they’re stepped on. This can result in severe pain, heart failure, and, if untreated, death. Luckily, an anti-venom was invented in the late 1950s.

This mollusc, the size of a golf ball, is one of the most toxic venoms on the planet. Its bites cause paralysis, numbness, muscular weakness within minutes, leading to respiratory issues and heart failure. Currently, there’s no antidote; the victim has to wait it out.

The Eastern and Western Brown Snakes have been responsible for the most reported deaths annually in Australia.  Their venom ranks as the second most toxic of any land snake in the world. A bite can cause paralysis and blood clotting disorders, however, there is an anti-venom that can reverse this.

The Sydney funnel-web spider holds a venom that’s one of the most toxic to humans. A bite should be treated similarly to a snake bite.

Descended from dinosaurs, this bird has been classified as the “most dangerous bird on Earth.” Most attacks on humans, that result in people being kicked, pushed, jumped on and head-butted, are due to the human wanting to feed the bird. Their middle claw is 12cm in length and acts as a dagger that could result in serious damage.

Changes to the landscape and native habitat as a result of human activity have put many of Australia’s unique species at risk.

The Australian Government is committed to protecting its unique and distinct animals, including supporting the recovery of threatened species, through its Threatened Species Strategy 2021 – 2031. This strategy builds upon the first one that was active between 2015 – 2020.

The Threatened Species Strategy is underpinned by consecutive 5-year action plans the first being between 2021 -2026. Five-year reviews will measure progress against targets and identify improvements to the Strategy and Action Plans to help meet the 10-year objectives.

This new Strategy presents an open invitation for all Australians across the community – from farmers, land stewards, traditional owners, researchers and citizen scientists – to come together as partners to support threatened species and places.

Our course, Valuing Nature: Should We Put a Price on Ecosystems, and IUCN Red List of Ecosystems: The Global Standard for Assessing Risks to Ecosystems, can help towards understanding these collective efforts.

The elements the new strategy has introduced include

Australian animals are indeed unique and so is the country’s climate and vast terrain. And despite its plethora of dangerous and deadly animals, you shouldn’t stress about them, as Australia has taken all precautions to ensure that everyone remains safe.

The facts that we should be most concerned about when it comes to protecting endangered Australian animals, is climate change and the effects of land clearing, which are unfortunately endangering Australia’s animals.

Research confirms that urban development and climate change threaten up to 33 per cent and 56 per cent of already threatened species, respectively. As such, building a sustainable future is more important than ever.

By finding small ways to contribute towards reducing climate change and global warming you can help protect the natural habitat not only in Australia but worldwide.