Skip main navigation
Home / Law / Crime, Justice and Society / What happens when a crime is committed?

What happens when a crime is committed? 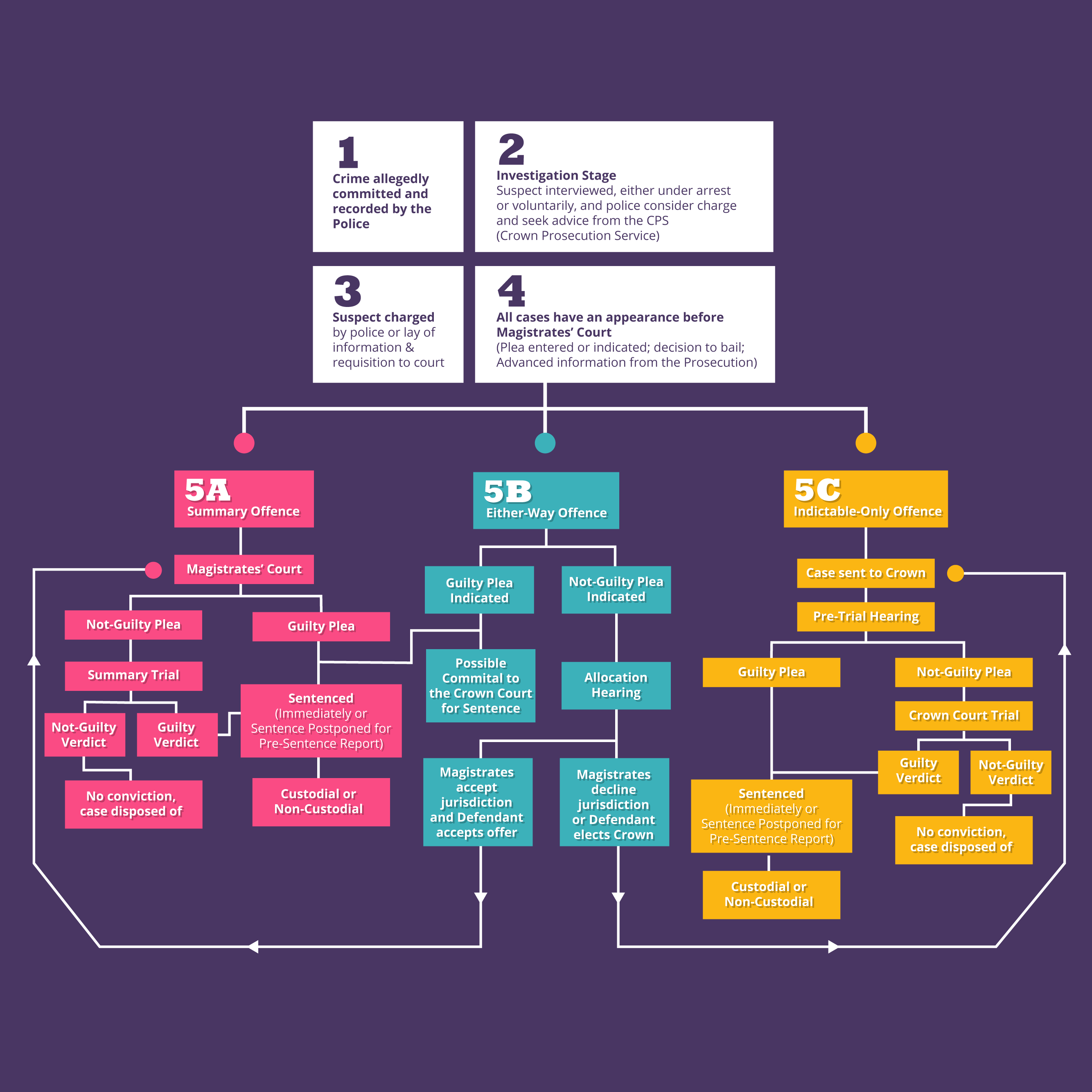 Click here for an expanded view of this flowchart.

Stage 1: A crime is allegedly committed and recorded by the police

At the very start of the criminal justice system is the allegation of a criminal offence. The word ‘allegation’ is important as it signifies an essential element of the criminal justice process. It points to the fundamental principle of ‘Innocent until Proven Guilty’.The majority of criminal offences are recorded by the police (although they are not the only body that holds such a role). Once a crime has been recorded i.e. it has been reported by a victim/complainant or it has come to the attention of the police, they will conduct an investigation into the alleged offence.

Stage 2: Investigation and suspect interviews (under arrest or voluntarily)

An investigation may include viewing a crime scene, collecting forensic evidence, and questioning victims and witnesses.

View Course
This may result in enough evidence for the police to have reasonable grounds to arrest a suspect for an offence, for which their arrest is also considered necessary (e.g. because the police wish to obtain more evidence by questioning the suspect).In arresting a suspect, the individual must be cautioned in a prescribed manner (the police caution), informed that they are under arrest and told the reasons for their arrest.In the police interview, the police are encouraged, through their training, to take an information-gathering approach, in which they may ask suspects to account for their whereabouts at a certain time, for example. All interviews must be recorded using, for example, audio or audio-visual equipment in police interview rooms.

In many cases, decisions about whether and what to charge a suspect with rest with the Crown Prosecution Service (CPS). This is an independent body which was created under the Prosecution of Offenders Act 1985 to provide an additional check and balance in the criminal justice process.Their decision about whether to charge someone is based on two sets of considerations:Together these considerations are known as the full-code test.Once charged with an offence, the suspect will be bailed by the police or kept in police custody until his first appearance in the Magistrates’ Court, where a decision will be reached about whether the suspect may be bailed by the court or should instead be remanded into custody in prison.

Regardless of the offence committed, whether it be a minor motoring offence or a serious offence such as murder, the defendant will always appear first in the Magistrates’ Court.The seriousness of the case will determine where an individual’s case is to be heard. There are three categories of offences and each vary in terms of which court the case will be held in.• Summary offences
• Either-way
• Indictable offences

Hi there! We hope you're enjoying our article: What happens when a crime is committed?
This article is part of our course: Crime, Justice and Society