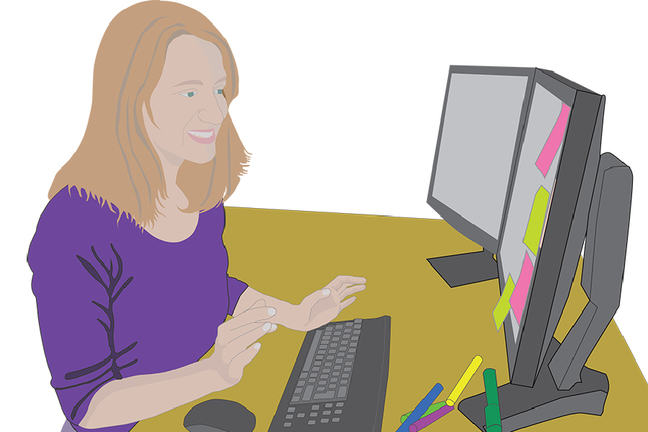 Meet Anna who has Dyslexia

We’d like to introduce you to Anna who has been a student in Southampton for the past year. Her Fashion Design course has been challenging but fun. She loves the creative aspect of the diploma and would rather be drawing than writing. She has moderate dyslexia, which affects her ability to read, spell and use numbers.

Anna is the first of nine fictional individuals that we will be introducing you to over the duration of the course. For all of these individuals the use of technology is vital in many different ways. Do try to ‘step into the shoes’ of each one as you learn more about different aspects of their daily lives and the challenges each of them face.

Anna, like all of the other fictional individuals, faces challenges on a daily basis.

A day in the life of Anna

Anna had several projects to complete as part of her portfolio but the one that worried her most involved a written assignment where she has to research the topic of Post-war fashions and their impact on today’s designs.

Her use of the library catalogue from home failed at the first attempt when she could not remember her password and kept putting in ‘afib61’ rather than ‘afid16’ and could not see the mistakes. She had been warned not to keep sticky notes of her passwords, but thankfully remembered she had them hidden on her phone. A piece of technology that never left her side!

Challenge 2: knowing the limitations of technology for error checking.

Having navigated the online library system, Anna eventually found a paper on the subject by putting the title into Google to check the spelling. She had added an ‘e’ to ‘Poste-war’ when writing in Word and it did not flag up the spelling error, but Google supplied the alternative as well as several books on the subject. Having copied and pasted one title into the library system she was able to download an etext and transferred it to her Kindle.

Having checked her schedule on her phone, Anna set off with her Kindle on the bus to college. She really likes the ink display as it is not so tiring to read compared to her computer screen and works well in sunlight.

Once at college and with a group of friends in the coffee area, Anna builds up a collection of notes about the subject and starts to make a mind map of all her ideas whilst discussing them with others. She finds this really works well as there is nothing worse than a blank page on a computer screen.

Organising thoughts into a format that follows the template for an assignment has always been hard and Anna tends to gather too many images and not enough text. She sometimes muddles dates and has to be really careful when she is writing about the 1960’s and 1990’s as nothing will check that type of mistake other than a friend willing to proof read!

Later in the afternoon Anna visits the library and becomes rather depressed, as although she has found several books on the subject, they are not available electronically and she cannot easily search for topics and have sections read out with text to speech. She finds it hard to re-read her hand written notes so tends to dictate suitable quotes into her phone for use later. Photocopying sections and highlighting important parts is another strategy she has learnt.

Challenge 4: being creative with the way technology can be used

On the way home Anna finishes reading the etext on her Kindle, having made bookmarks of sections she wants to reread and transfers the main topics from her creative mind map to her Word document. By sorting the order of topics in the outline view of Word, she has what she considers is the start of something good. She uses her text to speech to check spelling and she really finds it hard to pick correct words for spell checked lists. This particular program also has a screen overlay so that all her text is dulled with a grey/blue hue.

Later in the evening she becomes distracted and ends up chatting on Skype and checking Facebook messages as well as watching YouTube videos about fashions after 1945. Finally, by midnight she has something written down, several images and even though it has taken her at least three to four times longer than her friends to complete the assignment it is nearly finished.

Can you think of any other technological challenges that Anna might face in daily life?