This content is taken from the University of Southampton's online course, Inclusive Learning and Teaching Environments. Join the course to learn more.
View course

0:08Skip to 0 minutes and 8 seconds GRAEME EARL: One of the aspects of archaeological fieldwork is a sense of teamwork. So one of the transferable skills as an archaeologist which we tend to talk to students and parents about, is that ability to come together, form new collaborative communities, and work focused on a particular topic– normally in the field. And the fieldwork’s going abroad or going down the road somewhere in Southampton, but living together, working together has inevitably a significant impact. But that’s clearly not the only way in which we can develop those kinds of communities. We don’t have to require people to travel. We don’t have to require people to have the same level of knowledge or prior training.

0:57Skip to 0 minutes and 57 seconds We don’t have to require them to be interacting in the same environment, with the same things, because we have now again such a broad range of digital methods and other learning styles, that allows people to come together virtually. In a very real sense. So in the case of the Portus course, we’ve recently been experimenting with study groups. So these are analogous to a seminar that you might have at university. People start off not knowing each other, and by the end of six weeks, they know each other very well. And they haven’t just talked about the question of the day, or of week. They’ve talked about shopping, or the weather, or politics, which is all part of creating that functioning community.

1:49Skip to 1 minute and 49 seconds So I think that the joy of the technology, is the ability to take methods for interaction that we know work, and broadening them much more. And the last example, I’d say is that we’ve had this process where people can comment on aspects of a course, they can form a study group. But now what I’m suggesting is, why not make those study groups completely open? So only a certain number of people can actually comment on it and take part. But lots of other people can view that process. That’s much more like a panel session at a conference. So by tweaking the way the technology works, we have a fundamental impact on the way in which interactions occur.

2:35Skip to 2 minutes and 35 seconds And hopefully a concomitant benefit on the learning that results. They’re very real communities that we make and participate in online, just as real as the ones down the road.

The pros and cons of shared learning activities

In this video, Professor Graeme Earl introduces us to the idea of incorporating the use of online tools to enhance collaborative learning activities as well as practical ideas for replicating a real life experience.

The positive aspects of social media and collaborative tools are undoubtedly the chance to communicate with any number of individuals across a diverse community and to share knowledge. JISC suggests that from an institutional perspective there are differences when supporting online students rather than working face to face.

Disabled students may be more willing to ask for help online than in face-to-face situations. However, there can be the chance for misunderstandings to occur in what is a world often devoid of body language and vocal tone. Additional strategies may be needed depending on students’ writing and reading speeds, listening skills and confidence in sharing thoughts. Once again clear guidelines can help. 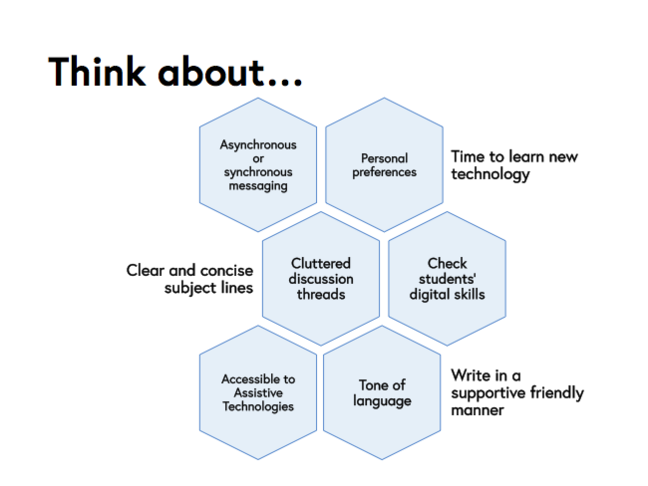 Honeycomb of items to ‘think about’ text version

What is your experience of using online tools to enhance collaborative learning activities?