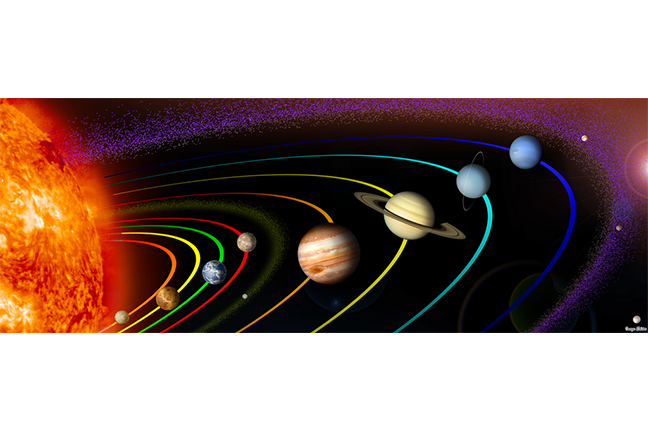 In 1609 Kepler formulated his first two laws to summarize the remarkable astronomical observations his mentor Tycho Brahe had made over many years. Ten years later he published his third law, sometimes called the law of harmonies. It is a beautiful example of a power law between the period of an orbiting body and its average distance to the body it orbits.

Periods and average distances of planets

Most planets have elliptical orbits — this is Kepler’s First Law, with the added provision that in the case of a small planet revolving around a big sun, the sun will be at one of the foci of the elliptic orbit of the planet. In fact most orbits are quite close to being circles.

Kepler’s Second Law asserts that areas swept out by a planet in equal times are equal. Kepler’s Third Law is the most complicated, and it relates the period \(\normalsize{T}\) of a planet, which is the time spent for one revolution around the sun, to the average distance \(\normalsize{R}\) to the sun.

The question that Kepler answered was: what is the general relation between \(\normalsize{R}\) and \(\normalsize{T}\) for the other planets?

Here is a table of periods and average distances for the planets, as well as the ratio \(\normalsize{T^2/R^3}\).

Our source for this data is the Kepler’s three laws page over at the physicsclassroom.com.

The more general form of the Third Law

The case of comets

Comets which are recurrent also obey Kepler’s law. The most famous one is Halley’s comet, with an orbital period of \(\normalsize{75.3}\) years and an average distance of \(\normalsize{17.55}\) au.

You can compute that

which is pretty close to one.

The moon and other satellites of earth

What about our moon? That is also an orbiting body, but this time orbiting around the earth. It is known to be about 384,400 km from the earth, as compared to the distance from the earth to the sun of one a.u., or about 150 million km. The period of the moon is about 27.32 days. So let’s calculate what the ratio \(\normalsize T^2/R^3\) is in units of \(\normalsize yr^2/au^3\) for the moon revolving around the earth. Some conversions are needed – but we are experts at that!

In units of earth years, the orbital period of the moon is

Putting these together, we get that

The geostationary satellites are exactly at the correct height to ensure that their orbit times are exactly one day. This guarantees that they are constantly above a fixed equatorial location on the earth, as it also rotates around its axis once a day, so that their periods in years are

Measured from the center of the earth the height of such a satellite is \(\normalsize 42,164\) kilometres. So in a.u. units this is

Putting these together we get

These two values for the moon and a geostationary satellite are reasonably close together, giving further evidence that Kepler’s power law relation also holds for general orbiting bodies.

What about for the International Space Station? Can you gather some data, and make some calculations, and see if that also roughly fits with Kepler’s law of harmonies in its orbit around the earth?

A1. Kepler’s third law says that \(\normalsize T^2/R^3\) should be roughly the same for all bodies orbiting Jupiter. So if we call Ganymede’s orbital period \(\normalsize T_G\) then by comparing with Io’s orbit, we must have

Notice that whatever constant of proportionality occurs in Kepler’s law, it cancels here.