A costumed interpreter as Victoria in her earlier years.

There’s no doubt that Victoria was short, barely reaching 5ft 1, but for much of her life she maintained a healthy weight, despite the huge quantities of food available to her. She started her reign as a slender girl who was eager to maintain her slender appearance – going so far as to give up lunch in her late teens, and dieting very successfully when she wanted to.

She was proud of her figure, and constantly compared herself to the other ladies she met. Many people criticised her dress sense however, and by the end of her life she had a tendency to over-ruffle her gowns, which made her appear larger than she was. However, after Albert’s death she steadily put on weight, reverting to her troubled teenage habit of eating too much, too fast.

In 1832, when Victoria was 12, her Uncle Leopold wrote to give her some of his characteristically unsolicited advice:

‘If I was to give you an opinion, I should say that a certain little Princess eats… frequently a little too much, and almost always a little too fast’.

He was not the only person to remark upon her eating habits. Her half-sister, Feodora, recalled her habit of adding too much salt to her food, while her doctors prescribed various tinctures for the indigestion she suffered, even as a teenager. When she became queen her tendency to eat fast caused one courtier, Thomas Creevey, to accuse her of ‘gobbling’, while her adoption of the new fashion for stand-up buffet suppers at balls, instead of sit down meals, also led to criticism. Being an enthusiastic eater was not deemed to be genteel, in men or women, and one of the features of the buffet-style service à la Française was that it allowed one to show self-restraint, when faced with what was often a gargantuan amount of food. By contrast, not showing restraint marked you out as somewhat lacking.

Several people suggested she was plump. In her journals she showed that she was very conscious of her weight, and scared that she would become fat. Lord Melbourne, Victoria’s first Prime Minster, was a well-known glutton, who didn’t help to curb her love of food. They bickered about each other’s eating habits, and he teased her about growing as fat as her Georgian male relatives, most of whom were obese. She was horrified in 1839 to find out that she weighed 8 stone 13lb, by which time she was being described as rather plump. Given that by modern standards she was still quite thin, this serves as a salutary reminder that standards were different in the past, and that we should not necessarily take contemporary descriptions of Victoria as fat when a younger woman as meaning quite the same thing as it would today.

Some of her gowns survive in the dress collection at Kensington Palace, and they are certainly not huge. She would have worn a corset, which, as she was used to wearing them and they were made-to-measure, would not have been uncomfortable, and which would have emphasised her hour-glass figure. 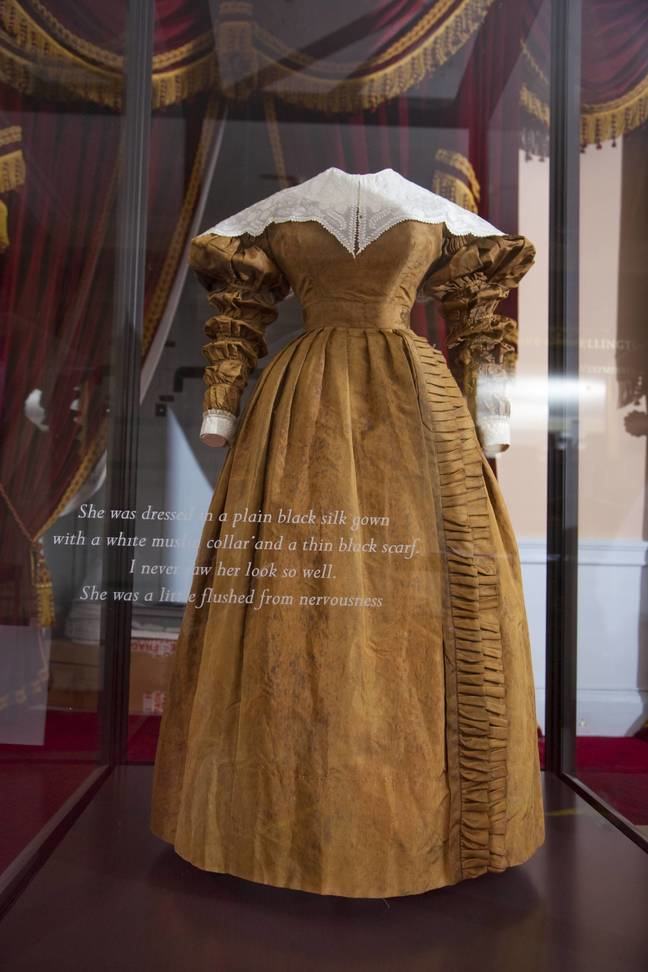 Fashions changed across her reign, with the waistline moving, and skirts changing in volume and shape, so it is impossible to directly compare the gowns of the 1840s with those of later eras. It’s hard, therefore, to identify exactly when she stopped being slender, or at least relatively so, and moved definitively to being overweight.

Until Albert’s death, photographs suggest Victoria remained a normal weight. He was renowned for having calmed her down, and she later looked back with mild horror at her behaviour before her marriage. Albert wasn’t interested in food, and quite probably suffered from irritable bowel syndrome (IBS) or Crohn’s disease, which may well have been a contributory factor in his death (you can read more about Albert’s ill-health in Helen Rappaort’s ‘Magnificent Obsession’). When the couple travelled to their holiday homes at Osborne and Balmoral, he went off shooting or to visit his various farming projects while she walked over the moors, picnicking in hollows, or taking tea with the children at Osborne’s Swiss Cottage.

After Albert’s death, Victoria’s world collapsed, and she reverted to her first love: food. She put on significant amounts of weight, occasionally losing several stone without it making her look thin (as after an illness in the 1870s, when she had to be fed by her daughter like a baby, which she hated). By the late 19th century she was struggling to walk unaided, and her surviving gowns are enormous in comparison to those from her youth. Several pairs of bloomers also exist, suggesting that her waist was by now in excess of 40 inches wide, an unhealthy size considering her height.

In old age, Victoria had the reputation of a glutton. She ate extraordinarily fast, and, having finally adopted service à la Russe, she could put away an entire eight or nine course meal in half an hour – purgatory for her fellow diners, as the table was cleared each time she finished a dish, so they had to match her pace or starve. Marie Mallet, one of her ladies in waiting, commented that she had the constitution of an ox, but suffered horrendous indigestion due to her habit of consuming huge apples, ice creams, full and rich meals, all washed down with copious amounts of claret. Her doctors eventually suggested she try substituting one of her meals with Benger’s Salts, which was an indigestion remedy. She did, indeed start taking them, but in addition to her normal meals, rather than as the directed substitution. In December 1900 her appetite started to fail her: it was one indication that, at 81, and after a reign of over 60 years, she was finally dying.

Not all of her food habits were unhealthy, as Dr Annie Gray will explain in the next Step.