This content is taken from the University of York's online course, An Introduction to Sociolinguistics: Accents, Attitudes and Identity. Join the course to learn more.
View course
2.7 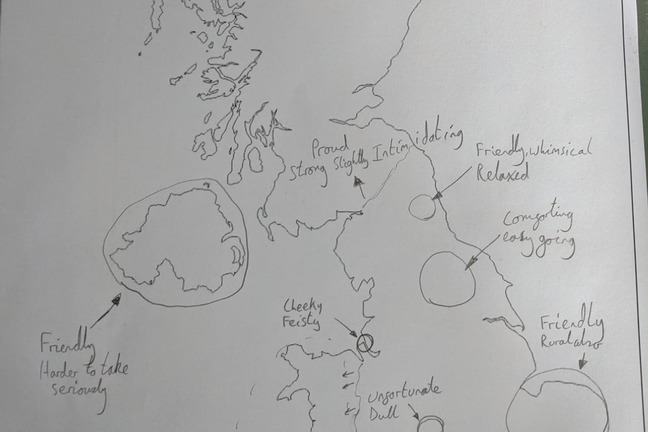 Map of the United Kingdom with notes

Perceptual dialectology is used to explore how non-linguists see regional language variation. This topic ties into what is known as ‘folk linguistics,’ or the beliefs that non-linguists have about language. These beliefs include everything from what makes different accents sound differently to one another, where exactly these accents are spoken, and even why non-linguists think there is so much (or so little!) accent variation.

To explore these insights into language and social attitudes, perceptual dialectology researchers use a map task. You can see an example of a completed map task in the image at the top of this page, which is also available in full using this link.

Notice as well that this participant has far fewer boundaries and labels for Scotland, Northern Ireland and Wales than they do for England. This lack of detail might suggest that the participant is more familiar with English accents, forming views about speakers from other parts of the United Kingdom which are more heavily based on stereotypes. Another participant might hold completely different opinions about people from the same region.

To explore the robustness of these attitudes, therefore, a researcher might want to collect many completed maps. Doing so would form an overall map of language attitudes from a particular community or group. If a large number of maps were combined into a single ‘master’ map, any unique or rare opinions would be less influential on the labels and boundaries drawn. Having these maps (whether in isolation or combined), allows us to look at the differences between how linguists and non-linguists understand accent boundaries.

For example, the United Kingdom is known to have a large amount of regional variation right across the country. However, individual participants tend to draw maps which don’t come close to describing the real amount of accent variation that is present. Of course, there are many possible reasons for this apparent ‘gap’ in knowledge. These might include not being exposed to speakers of different accents or that non-linguists are using different criteria to differentiate between accents.

One benefit of this data collection approach is that the participants have a lot of control over their responses. This control comes from the maps being blank to start with. As such, researchers can gain real insight into a participant’s perception of accent boundaries and their language attitudes. It is also possible that many participants would find this task less intimidating than being interviewed directly.

Later on in this week of the course, we’ll discuss both the positive and negative aspects of a range of sociolinguistic data collection methods.