Previously we have looked at self-healing mechanisms, this step focuses on what we can do to enhance and speed up this process. Professor Finn Gottrup shares some interesting examples of effective wound management below.

The graph below is a study focusing on the relationship between collagen production and oxygen intake in guinea pigs; it shows that the production of collagen is directly proportional to the amount of oxygen present.

Further to this, an experiment was conducted in which bacteria was infected into the skin of dogs and formation of abscesses was observed. Abscess formation was significantly lower when there was a higher concentration of oxygen provided. This proves that oxygen not only plays a part in wound healing, but also helps in infection prevention.

The next experiment provides evidence to support the previous point. The effect of oxygen against Escherichia coli was compared to the effect of antibiotics against the bacteria. If the animal is subjected to lower levels of oxygen (12%), more necrosis occurs. If antibiotics are administered along with the same level of oxygen, necrosis is slightly reduced (8% non-necrotic). However, a similar effect is achieved (15% non-necrotic) by increasing the oxygen levels (21%). If high oxygen and antibiotics are administered simultaneously, very little necrosis can be seen. 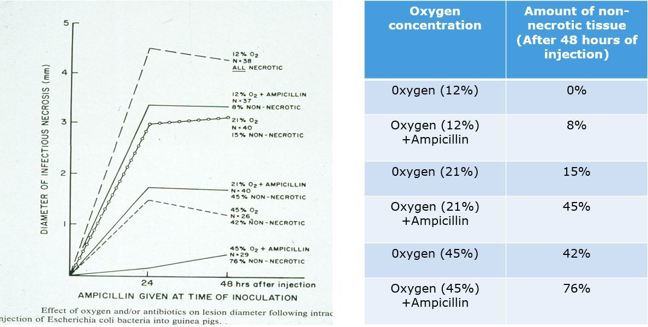 Systemically applied normobaric oxygen is a clinical method of oxygen treatment. It can involve the use of a Hudson mask. Subcutaneous tissue oxygen tension is a powerful predictor of wound infection. The graph below summarises the results of an experiment to compare the rate of infection versus oxygen administered post-operatively through a mask. The rate of infection steadily decreased as levels of oxygen perfusion was increased.

This was also seen in a study published in The New England Journal of Medicine. 500 patients undergoing colorectal resection were divided into two groups to receive either 30% (Group A) or 80% (Group B) inspired oxygen during the operation and for two hours after. The arterial and subcutaneous partial pressure of oxygen was significantly higher in group B. The rate of wound infection was found to be 11% in group A and 5% in group B, thus proving that perioperative administration of supplementary oxygen is a practical method of reducing the incidence of wound infections.

There has been an ongoing debate of the advantages and disadvantages of providing supplemental perioperative oxygen. For a summary of papers published for and against this technique, please view the document provided in the downloads section below.

Hyperbaric oxygen therapy is the use of oxygen at an ambient pressure higher than atmospheric pressure. The body’s tissues need oxygen to function, and additional oxygen can help damaged tissue heal. Oxygen at high pressure can enhance tissue function and fight infection under certain conditions.

By using hyperbaric oxygen therapy, you increase the diffusion radius of oxygen into the tissue by a factor of 2-4.

Which method of oxygen treatment have you performed as part of your clinical practice? Share your experiences and thoughts on the technique in the comments section below.