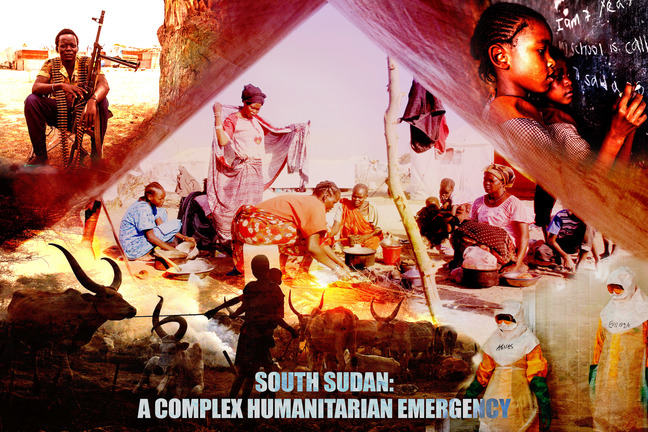 For decades, South Sudan has experienced ongoing protracted crises resulting in widespread and persistent violence, population displacement and disruption of livelihoods. It has been exposed to conflict, cycles of floods and drought, and outbreaks of plant- and animal pests and diseases. Exacerbated by fragile institutions, poor governance, weak physical and economic infrastructure, the cumulative effect has been catastrophic. Food insecurity, the widespread displacement of whole communities, violence, continuing climatic shocks, and a collapsed economy undermines the struggle to develop peaceful, sustainable livelihoods.

The Republic of South Sudan achieved independence from its northerly neighbour, Sudan, on 9 July 2011, inheriting a legacy of civil war and tribal tensions. Conflict with Sudan over contested oil fields and territories in the border areas continued. Then in December 2013 internal conflict due to a political dispute broke out again, which further inflamed inter-communal tensions resulting in the displacement of more than 2.4 million people, including some 750,000 people seeking shelter in neighbouring countries.

Livestock is a critical asset which is central to the internal conflict. The loss of livestock due to cattle raiding, drought and displacement exacerbates food insecurity and malnutrition.

Communicable and water-borne diseases, including cholera, diarrhoea and malaria are prevalent. There is also an alarming level of Sexual and Gender-Based Violence (SGBV) with as many as 65% of women and girls having experienced physical and/or sexual violence.

The ongoing situation prolongs instability, poverty and misery. It is a clear barrier to the country’s development with poor institutional structures unable to deliver services without considerable external support. The multi-faceted challenges posed by the many hazards to which households and communities are exposed explains why it is termed a ‘complex humanitarian emergency’.

Despite the multitude of hardships posed by decades of conflict and environmental hazards, communities have absorbed shocks and adapted to changing and challenging situations. This demonstrates an impressive level of resilience. But how can this level of resilience be maintained and supported?

Some of the challenges faced by communities in fragile and conflict-affected states include:

In remote and insecure locations, what measures might communities take to become more self-reliant and resilient?