This content is taken from the Raspberry Pi Foundation & National Centre for Computing Education's online course, An Introduction to Computer Networking for Teachers. Join the course to learn more.
View course
1.10

0:03Skip to 0 minutes and 3 seconds What networks might you use day to day without even thinking about it? Before you wake up, your central heating detects the temperature and wirelessly communicates with your boiler and tells it to raise the temperature. Your smart meter might send your energy usage to your supplier. As you eat breakfast, your digital radio streams out music played over Bluetooth speakers. You might check the calendar on your phone and receive a notification about the weather forecast, which reminds you– you need to take an umbrella. You might use the Sat Nav GPS in your car, getting live traffic updates based on your location data. Or you might check the bus timetable using your 4G network.

0:43Skip to 0 minutes and 43 seconds As you walk to work listening to a podcast through Bluetooth headphones, you receive a phone call connected to a nearby cellular tower. Over your lunch break, you might sign into the free Wi-Fi at your favourite coffee shop. You need to do some online banking but don’t want to risk anyone stealing your data by using the public wireless, so you set up a wireless hot spot on your phone and connect to a VPN. This safely encrypts your data before it’s routed to the internet. Back home that evening, you might stream a movie using an Ethernet connection on your TV Smart Box. Or perhaps you’ll play a multiplayer video game online with friends from all over the world.

1:21Skip to 1 minute and 21 seconds Take a moment to consider the multitude of devices and connections that you use every day. Can you imagine your life without these connections? Share your thoughts in the comment section below.

Networks in Your Daily Life

In this step we will look at the various networks you’ve learned about so far and how they are used together in today’s world. We will also briefly cover Bluetooth.

In our daily lives, we have become so used to technology that it seems a natural part of our existence. We know we are using technology when we use our mobile phone or computer, but are largely unaware of exactly how these devices work or how they are connected.

The cellular telephone network was initially designed to provide voice services, and most of it can now also transfer data through the 3G and 4G networks. In more urban areas a range of paid-for and free wireless hotspots maybe be available, e.g. in pubs and cafes. Some cities are providing city-wide, free wireless networks, so people there do no need to use their 3G/4G data. If we work for a large organisation, we should be able to visit any of the sites and connect to the corporate network.

Where any organisation has a set of networks that cover a large geographic area, the collection of all of these networks is called a Wide Area Network, or WAN.

When we interconnect WANs that share a common set of protocols, we also refer to this as a WAN. Thus the internet is the biggest WAN in existence. 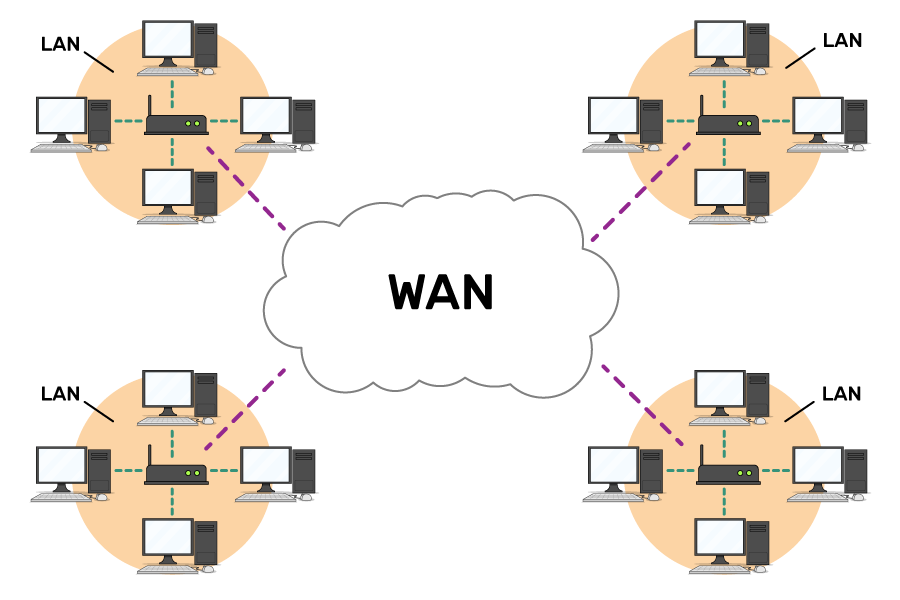 In offices or schools, dedicated wireless networks may exist for authorised users. Often, users can physically connect devices to a wired network through an Ethernet cable or use a computer that is already physically connected. Where all of the connected devices are in the same building or on the same site, the network is called a Local Area Network, or LAN; since wireless networks and Ethernet ables have a limited range, LANs usually cover a small geographic area.

Perhaps confusingly, we also use the term ‘LAN’ to specifically refer to a set of computers connected to the same switch or set of interconnected switches. In a building or on a small site, we may interconnect several of these LANs with a router (see week 2 of this course). Where these LANs are geographically close, the set of networks is still called a LAN.

PANs have been around for some time (mainly in the areas of home automation with the Z-wave and Zigbee protocols). PANs are wireless, meshed networks with a typical range of 10–20 metres; the meshed nature of a PAN means one device can act as a relay for others.

Bluetooth was designed to operate with little power consumption so that battery-powered devices can remain Bluetooth-connected for several hours on a single charge. This protocol is more convenient in this context than a WiFi connection, because there is no need for a central access point, and setting up a connection is easy: devices just ‘pair’, i.e. run a Bluetooth connection between them. Once paired, they remember their connections and automatically re-pair when they come in range of each other.

The reach of a Bluetooth network can vary between 1 and 100 metres, depending on how the device is powered. The first version of Bluetooth, launched in the mid-90s, had a data rate of 700 kbps; the current version 4 has typical data rates of 2.1 Mbps.

With increasing use of Bluetooth connections has come a greater focus on security to prevent hacking of devices containing personal data. To combat hacking, most Bluetooth connections now require a shared personal identification number (PIN), which is generated by one of the devices and physically entered into, or confirmed on, the other devices.

With the improvements in data rates and better security, Bluetooth is now also being used to provide a data connection between devices for internet traffic. For example, some smartphone models, when they have a data connection over the 3G/4G network, can extend this connection to a laptop using Bluetooth (you may know this as a personal hotspot).

You can also connect your smartphone to your computer using a USB cable to use your phone’s data to access the internet on the computer; this is still considered a PAN.

In the next step we will be taking a look at the actual hardware that allow us to connect devices together in these networks.

Consider these questions thinking about your average day.