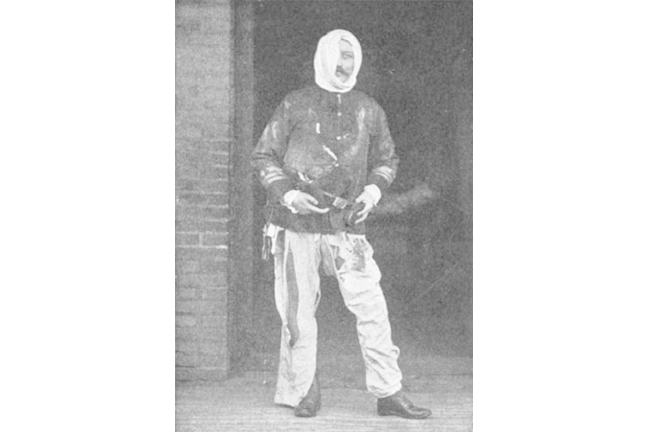 © Public domain, from Real Soldiers of Fortune, via wikipedia

Yankee at the Yalu

The decisive naval battle of the first Sino-Japanese War took place on September 17, 1894, in the waters near the mouth of the Yalu River dividing the Qing Empire from the kingdom of Joseon. There to record for posterity his account of the action was a colorful American mercenary, Philo Norton McGiffin, a “soldier of fortune” who had ended up in the service of China’s Beiyang (Northern) Fleet.

McGiffin was the son of a US Civil War veteran whose grades at the Naval War College were too low to qualify him for service, and so he lit out for the Orient in 1884 to help the Chinese fight the French in Vietnam. He missed out on the war, but attracted the attention of Li Hongzhang, who tapped Philo to help build China’s new naval college at Tianjin. When war broke out with Japan, McGiffin volunteered to serve as second in command on the Chen Yuen, one of Li’s expensive new ironclads.

McGiffin fought honorably that day in September, receiving a shrapnel wound from friendly fire that blinded him in one eye as he attempted to put out a fire on deck. He later dictated a blow by blow account of the battle, highlighting the novel and modern nature of the war, such as Japan’s testing of new technology by using Melinite explosives and mechanized “firing by director” (linking multiple guns to an electric circuit and firing in one volley). Japan’s ships maintained better formation and used superior tactics. As far as gunning accuracy, McGiffin observed dryly “it was on both sides bad; but, as the Japanese have admitted, the Chinese excelled.”

“Why did the Japanese win?,” the wounded American asked rhetorically in his assessment of the battle. “I reply, because the Japanese had better ships, more of them, better and larger supplies of ammunition, better officers, and as good men.”

McGiffin’s account is an intriguing primary source that puts you on the ship in the heat of battle—have a look for yourself via the related link. But the presence of an American foreigner that day also draws our attention to the dog that didn’t bark—to the notable absence of a different group of foreigners you might have expected to encounter—Koreans.

At the battle of the Yalu as in other crucial moments of the war, the lack of joint Sino-Korean military action is striking. It’s a particularly stark contrast with the Black Dragon War, when Admiral Yi Sun-shin held Hideyoshi’s ships out of the Yellow Sea until the Ming could provide reinforcements on land and sea.

Japan neutralized much of Korea’s military, disorganized to begin with, by rapidly taking effective control of the Joseon government in June—before the outbreak of the war. Still, the lack of military ties between Qing and Joseon was painfully apparent in the first Sino-Japanese War, and a symptom of weakness in their special relationship.

As to Philo McGiffin, he met a tragic end despite his valor. Forced to flee China as a scapegoat in the Yalu defeat, he ended up in a hospital bed back home in the US, partially paralyzed from his wounds. There, he shot himself on a late winter’s day, 1897.